Intel and Qualcomm dominate different regions of the semiconductor universe. But they're both going all-in on IoT, which will soon be a multitrillion dollar market.

The Internet of Things (IoT) -- which includes connected devices like wearables, smart appliances, and connected cars -- is widely expected to become the next major growth market for the tech industry. Research firm IDC estimates that the global IoT market will grow from $656 billion in 2014 to $1.7 trillion in 2020. 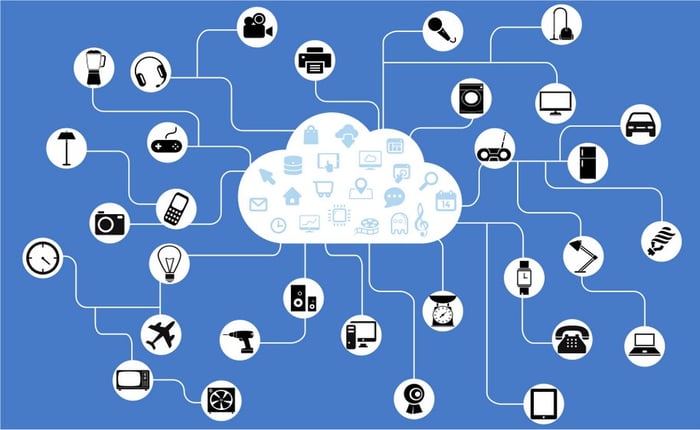 That's why big chipmakers like Intel (NASDAQ: INTC) and Qualcomm (NASDAQ: QCOM) are aggressively expanding into the IoT market. Intel, the largest PC and data-center chipmaker in the world, is using it to diversify away from its sluggish PC and mobile chip businesses. Qualcomm, the world's top mobile chipmaker, is expanding into IoT to diversify away from the saturated smartphone and tablet markets. As a result, the two tech giants are now clashing on multiple fronts across the IoT market. Let's take a closer look at both companies' core IoT strengths to see if either can triumph over the other.

Qualcomm's IoT strengths
Qualcomm controls over half of the smartphone application processor market and about 60% of the LTE baseband market, according to research firm Strategy Analytics, and hopes to use those established markets as a launchpad for its IoT efforts.

Last year, 120 million smart-home devices, 20 million cars, and 20 types of wearable devices were all powered by Qualcomm chips. To expand that reach, Qualcomm acquired CSR, an electronics company that specializes in Bluetooth, wireless, and automotive infotainment services, for $2.5 billion earlier this year. It also established the AllSeen Alliance, an IoT consortium that uses its open source AllJoyn framework as a communications standard for IoT devices. The AllSeen Alliance currently has over 160 members. To tether more start-ups to that growing ecosystem, Qualcomm launched the Qualcomm Robotics Accelerator, which provides resources to start-ups specializing in robotics and IoT technologies.

Qualcomm also recently signed a deal with Xilinx (NASDAQ: XLNX), the largest maker of FPGAs (field programmable gate arrays) in the world, to use its field-programmable gate arrays (FPGAs) to accelerate workloads in its new data-center chips. On their own, FPGA chips are weaker than traditional CPUs, but they can be reprogrammed for a wide variety of tasks in connected cars, factory automation, and more. Therefore, it's possible that Qualcomm might expand its partnership with Xilinx to reach additional IoT markets.

Qualcomm doesn't break out its IoT revenues on a quarterly basis. However, it claims that it generated $1 billion in revenues last year by selling IoT chips for city infrastructure projects, home appliances, connected cars, and wearables. That $1 billion amounts to less than 4% of Qualcomm's 2014 revenue,  but it still represents a promising start. Looking ahead, Qualcomm intends to expand its IoT business with SoCs (system on a chip) for connected cameras and drones.

Intel's IoT strengths
Intel's x86 chips still power the vast majority of PCs and servers worldwide, but it lost the mobile market to Qualcomm and other chipmakers that licensed ARM's (ARMH) low-power chip designs. Intel doesn't plan to lose the IoT market in the same way. That's why it's expanding into the IoT with low-power Atom and Quark processors, and tiny computing modules like Edison and Curie, which can be installed in a wide range of connected devices like wearables, smart appliances, and cars. It's also expanding that business into drones by combining its processors with 3D-sensing RealSense cameras.

Intel leads a group of companies known as the Open Interconnect Consortium (OIC), which is establishing an open IoT communication standard based on its IoTivity framework. This alliance only has about half as many members as Qualcomm's AllSeen Alliance, but it has considerable strength in China. Intel's pending acquisition of Altera (NASDAQ: ALTR), the second-largest maker of FPGAs in the world after Xilinx, will give it in-house access to hardware that should accelerate the performance of its data-center chips and possibly enhance its IoT chips and modules in the future.

Unlike Qualcomm, Intel reports IoT revenues on a quarterly basis. Last quarter, its IoT revenues rose 10% annually to $581 million and accounted for 4% of its top line. To broaden the division's reach, Intel recently created a new client and IoT business and systems architecture group that combines the platform engineering, client computing, IoT, software and services, and design and technology groups. It also hired Venkata Renduchintala, the former co-president of Qualcomm's main chip unit, to lead the new group.

The verdict: Too close to call
Qualcomm and Intel are both making solid progress in the IoT market, and it's impossible to predict which chipmaker will create the bigger ecosystem until the market matures. For now, investors should expect the two chipmakers to keep clashing  with competing communication standards and chip designs in fledgling markets like connected cars, drones, and smart homes. But as long as both companies stay invested in the IoT market, sales of IoT chips should gradually start accounting for bigger chunks of their top-line growth.