Have you ever wondered how you can make money from behavioral finance? It's a much-discussed topic that often leaves investors floundering for something tangible to invest in. Well, wonder no further, because I have three examples of stocks whose prospects are best understood using a simple understanding of the so-called wealth effect. So let's look at why Boeing (NYSE:BA), Deere & Company (NYSE:DE), and The Home Depot (NYSE:HD) are interesting for behavioral-finance enthusiasts.

The wealth effect is a concept from behavioral economics, which argues that a change in perceived wealth will cause a change in spending habits. Here is how the principle plays out in each company:

To be clear, none of these relationships are perfectly correlated. For example, Boeing's order book will also be affected by the timing of delivery of new planes, farmers might not have access to financing to buy machinery, or housing turnover, another determinant of Home Depot's demand, could slump even while house prices rise.

Nevertheless, there is strong evidence to suggest that all three companies' managements believe those bullet points hold. Here is Boeing's former CEO, Jim McNerney, speaking on an earnings call in April:

"As I mentioned on last quarter's call, historically airplane orders are highly correlated to airline profitability, and lower oil prices have not fundamentally changed our customers' view on fleet planning or their commitment to existing delivery schedules."

Turning to Deere, the first thing its management references in its earnings reports is usually U.S. farmers' cash income.

Meanwhile, here's Home Depot CEO Craig Menear on the company's recent earnings call: "Turning to the macro environment, while 2015 consensus U.S. GDP growth projections have moderated, we continue to see positive signs in the housing data, with home-price appreciation and housing turnover being key drivers of growth for our business. "

So what?
Readers can be forgiven for thinking that much of this is obvious, and hardly something you can make money with. As with many aspects of investing, everything is "20-20" in hindsight.

For example, earlier in the year, analysts questioned whether Boeing's orders would disappoint in 2015 because lower oil prices caused a fall in replacement demand for inefficient airplanes. However, a recent Reuters article quotes Boeing's sales chief, John Wojick as saying, "We are seeing strong growth in many regions of the world, which definitely offsets some of the lack of replacement demand, because with lower fuel prices there is interest in continuing to fly some of the older airplanes a little while longer."

Indeed, back in June, the International Air Transport Association forecast that net post-tax profits for the worldwide airline industry would be $29.3 billion in 2015, from $16.4 billion in 2014 and $10.6 billion in 2013 -- indicating that all is well for Boeing.

Similarly, Home Depot's prospects were put into question following a slowing of growth in the U.S. economy and a mixed reporting season for the retail sector. However, the recent results saw the company raise sales guidance for the third quarter in a row this year. A look at existing home sales and home prices tells you the rest of the story. 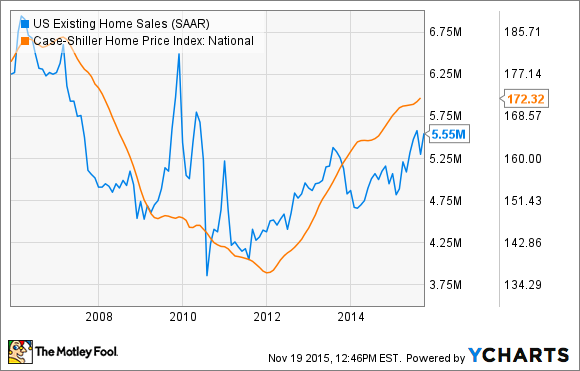 On the other hand, Deere continues to see weakness in farmers' income, with management forecasting a 7% drop in farmers' cash receipts in 2015. In addition, cash receipts for 2016 are expected to be "down slightly" -- not good news for Deere's outlook in 2016.

The following chart tells you all you need to know about each company's year so far. 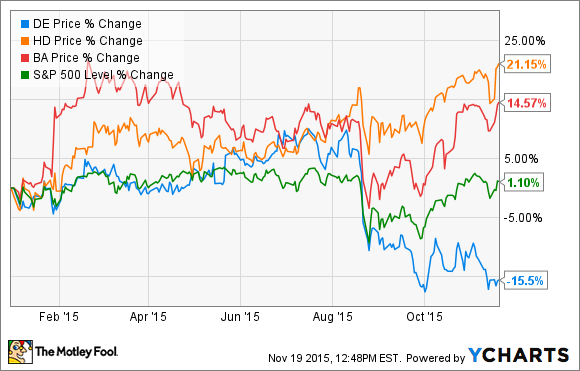 The takeaway
In conclusion, the wealth effect is real and has very real affects on the three companies discussed above. Looking ahead, Deere investors will be hoping that crop prices increase to help out farmers' incomes, but I have some near-term concerns about inventory and used-equipment prices. Boeing's prospects look good, but it's unclear if a slowdown in emerging markets will feed through into reduced profitability with Asian airlines -- key buyers for Boeing's planes. Of the three, Home Depot looks to be the most interesting. As long as the U.S. economy, and therefore housing, doesn't collapse it will likely continue to thrive. Invest accordingly.