I've been following Apple (NASDAQ:AAPL) for quite some time, and along the way as an investor you naturally consider the derivative supplier plays. At this point, Apple suppliers could arguably be their own sector, given how many there are.

But as an individual investor looking for individual stocks riding on Apple's coattails, it's far from a slam dunk. Don't get me wrong, I've made numerous investments in Apple suppliers over the years, so take it from my personal experience when I say that investing in Apple suppliers is an incredibly risky proposition. Frankly, I'm net negative on this "sector."

The basic risks
On a base level, there's a certain appeal to winning Apple's business. Becoming an Apple supplier usually comes with significant volume, which is a challenge in and of itself to meet. That volume usually comes with impressive and commensurate revenue growth, which is the part that typically gets investors excited.

Now the bad news. There are plenty of potential downsides to becoming an Apple supplier. First, Apple has a habit of using its weight as bargaining leverage, and often negotiates substantial volume discounts that inevitably put a pressure on the supplier's margins. Even if the supplier grows its relationship with Apple, it then faces customer concentration risk. If Apple finds a better supplier, or if the component becomes commoditized, or decides to change technologies, among other potential switching reasons, that initial supplier might have a lot to lose even if times were good for a couple of years.

Case study: OmniVision
One of my first Apple supplier plays was OmniVision Technologies (NASDAQ: OVTI). For a little while there, OmniVision was the leader in backside illuminated, or BSI, image sensors. By flipping the sensor upside down (relative to the traditional method), OmniVision sensors collected light through what used to be the backside of the sensor. This literally flipped the arrangement of layers on its head, creating the most direct path for light to reach the pixel, minimizing crosstalk between pixels in the process. 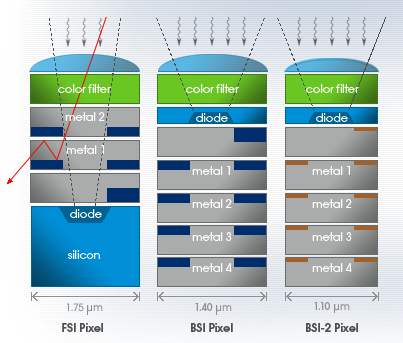 BSI sensors facilitate thinner and lighter designs, and we all know how much Apple loves those two qualities. For its efforts, OmniVision enjoyed supplying the primary camera for the iPhone for a few years, but then Sony caught up and ultimately won the majority of Apple's business.

Nowadays, OmniVision is in the process of being acquired by Hua Capital Management, CITIC Capital, and GoldStone Investment, but I ate my loss years ago.

The irony here is that NXP received perhaps the most attention for its leadership position in NFC chips, but NFC chips are actually a modest part of the overall business. NXP is a diverse semiconductor company with a wide range of products; no single operating segment accounts for more than 21% of sales.

NXP is notable because it is one of the few Apple suppliers that has outperformed the Mac maker over the past five years. Perhaps more importantly, this outperformance has almost nothing to do with Apple, since Apple only recently adopted NFC and became a meaningful customer.

It's really hard to beat the real deal
Speaking of performance over the past five years, here's a handful of well-known suppliers compared to Apple. 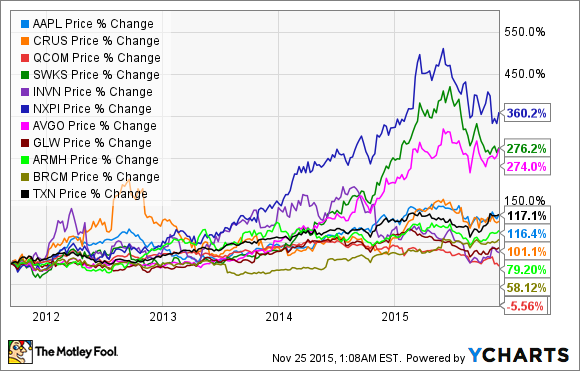 This is hardly a comprehensive comparison, as Apple's supplier list for 2015 (link opens PDF) is massive, but it goes to show that sometimes the hype over becoming an Apple supplier might not always be deserved. Best-case scenario: A supplier gets a revenue uplift and may even outperform Apple for a couple of years. Worst-case scenario: A supplier files for Chapter 11 bankruptcy in order to extricate itself from Apple's clutches.

All the while, Apple remains remarkably cheap compared to nearly all of its suppliers as well as the broader market. Considering the risks outlined above that all Apple suppliers face, I've decided that it's just safer to buy more of Apple itself.