Image by skeeze via pixabay

While it most certainly wasn't a great week to be a turkey it was once again a great couple of days to be an investor in the healthcare space. Several of the exchange-traded funds that focus on the sector provided their investors with terrific returns that far outpaced the S&P 500 last week. One fund in particular, the SPDR S&P Biotech ETF (NYSEMKT:XBI), performed exceptionally well, as its share price was up an astounding 5.16% during the short week. 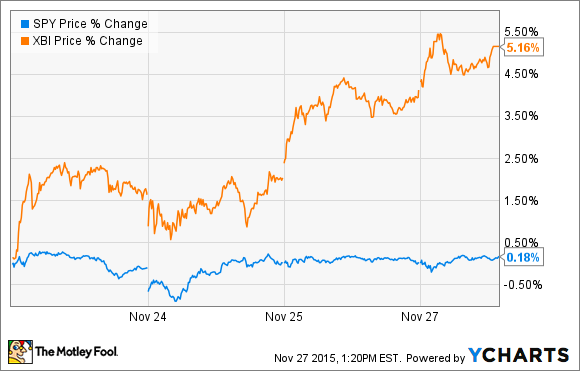 So what is going on inside this fund that caused it to outperform the indices by so much last week?

Cracking it open
Like all other healthcare focus ETFs, the SPDR S&P Biotech ETF holds a diverse collection of companies in the sector. However, this ETF distinguishes itself in three distinct ways from other funds that helped it perform so well last week.

First off, as its name implies this ETF only invests in biotech stocks, so unlike other healthcare ETFs the XBI doesn't hold any other healthcare related companies, such as health insurers. Thus, when biotech stocks perform well, so does the XBI. Second, this fund follows an equal-weight strategy, which means that it initially invests the same amount of its capital equally into each one of its 103 holdings. Finally, this ETF tends to focus on buying and holding mostly small cap biotech stocks, as the average company in this ETF has a market cap of roughly $2 billion, which is dwarfed but its category average market cap, which rings in closer to $35 billion.

Taken together those three attributes tend to make the XBI much more volatile than a typical healthcare ETF, which can lead to wild swings in its share price. While that fact can make it no fun to hold on to this name when the markets are in a foul mood, when things are going well this fund can really do well, as it did last week.

Top holdings
But what specifically happened this week that caused the fund to do so well? To help answer that question its best to look at the funds top holdings to see what caused the outperformance.

What went right this week
Many of these stocks performed very well over the past week, which is certainly a big reason why this ETF was up so much over such a short time period. Five Prime Therapeutics proved to be the top performer of the group last week as its shares were up nearly 9% for the week. Several other of the funds top holdings showed great returns as well, as Geron posted a 8.47% gain during the week and Prothena (NASDAQ:PRTA) showed a gain of more than 6%.

While not a single one of these companies released any news during the week to justify the huge move, all three of those company's stocks have been on fire recently -- each of them is up more than 28% in the last month alone. 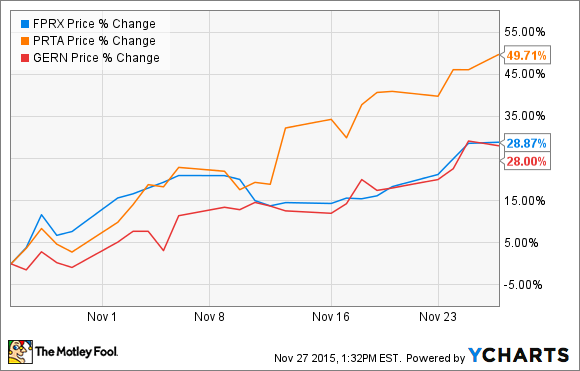 Prothena shares in particular continue to perform exceptionally well, and this recent run-up is capping off a banner year. Shares of this small cap are up more then 220% over the last 12 months as investors have been bidding up the stock ever since they got their first look at results of its experimental Parkinson's disease drug PRX-002. This drug is designed to reduce the build up of a neural protein in the brain called alpha-synuclein that is associated with the disease.

Earlier this year the company reported that patients who took PRX-002 saw their alpha synuclein levels drop by as much as 96%, which is a massive improvement that performed significantly better than a placebo. Given that Parkinson's is a huge market that is particularly difficult to treat it's no wonder that investors are excited about the potential of PRX-002, and they continue to bid up shares.

Can XBI continue to win?
The SPDR S&P Biotech ETF has been a terrific investment for several years in a row now. I personally like this funds equal weight strategy, as I think that its quite smart to place a lot of small bets in the small cap biotech space and let the winners grow. The fact that is also sports a dirt cheap expense ratio of 0.35% makes it also an inexpensive and lower risk way to get in. If you are interested in the small cap biotech space but do not want to have to pick individual stocks for yourself, I think this ETF is a terrific way to go.