Facebook just introduced a new crowdfunding tool that could prompt more people to turn over their credit card data. 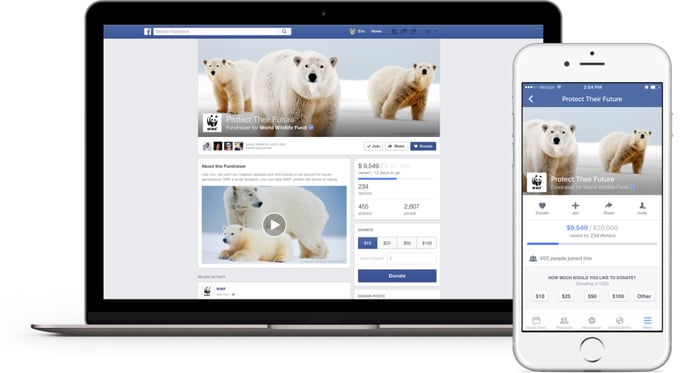 That's why Facebook (META -1.19%) has rolled out multiple ways to gather users' payment information over the last few years. Most recently, the company introduced a new tool to crowdfund nonprofits. The tool capitalizes on the natural virality of its network and the way most people hear about crowdfunding campaigns -- Facebook.

Taking the "non" out of nonprofit
It's easy to see Facebook opening up its new tool, called fundraisers, to businesses that want to crowdfund a new product. Such a tool would compete with popular platforms like Kickstarter and Indiegogo, and hold a huge advantage over those players with Facebook's network of 1.55 billion users. Facebook could allow users to fund campaigns directly from their News Feed with just a couple of clicks.

Crowdfunders would flock to Facebook's product because it removes a lot of friction in the process. Most backers discover Kickstarter projects via social networks, they then have to navigate to another platform, and carry out a number of steps before they finalize their contribution. If a user is on mobile, it's highly unlikely he'll complete the task.

Facebook can remove many of those steps and improve the user experience. With fewer steps, there are fewer chances for a potential backer to back out.

This isn't the first time Facebook has started testing a commerce product with nonprofits. The "buy" button that's popping up in more and more News Feeds and Instagram feeds started off as a "donate" button geared toward nonprofits. Maybe Facebook found that people are more willing to surrender their payment information when it's for a good cause.

Both companies have leveraged their stacks of payment data for other products as well. Amazon uses it for authentication and payments on other retailers' websites. Apple used it to launch Apple Pay. So, what can Facebook do?

As Facebook collects payment information from more users it increases the value of its buy button by reducing the friction of purchasing items through the social network. Another opportunity is on Messenger, where Facebook is developing a couple of platforms for users to interact with businesses. The first is aptly called "Businesses on Messenger," which allows businesses to communicate directly with customers. Facebook has been pushing shoppers to contact businesses directly with Messenger via Facebook pages and News Feed ads. If Facebook has those users' credit card information on file, it's a lot easier for those businesses to sell products via Messenger.

Second, Facebook is working on M, which acts as a virtual assistant. M can book plane tickets, buy gifts, and do all sorts of commerce activity, which requires payment information on file. While Facebook doesn't make any money off of M now, it's certainly on the path toward monetization.

Theoretically, if Facebook collects enough payments information it can extend its payments capabilities to other apps just as Apple and Amazon have done with Apple Pay and Pay with Amazon. Developers are already using Facebook for authentication, reducing the need for new users to sign up for a new account. With users already logged into their Facebook accounts through a lot of apps, many new app users wouldn't have to do anything more before they check out.

With yet another way to collect payment information with fundraisers, Facebook will eventually have a collection that rivals some of the biggest e-commerce platforms. It can push deeper into shopping with its buy button, work toward monetizing Messenger, and even create a new payments business with that kind of data.