Mobile commerce is growing rapidly, but converting mobile shoppers into buyers has proven difficult. During Thanksgiving, 52% of online shoppers visited mobile websites, but mobile only accounted for 37% of sales, according to ChannelAdvisor.   Nordstrom (JWN -0.05%) thinks it has a solution for its customers that will help ease the pain of shopping on mobile and make it more personal at the same time.

Nordstrom's program is called TextStyle, rolled out over the summer, and it allows for a secure one-on-one buying experience with a consumer and a sales associate via text messaging. Interestingly, this is similar to products Facebook (META 3.01%) is working on with Messenger. The fact that Nordstrom is taking steps to offer functionality similar to what Facebook is trying to provide every retailer is a good sign for the potential for Facebook's efforts to provide a real source of revenue for Messenger, which has 700 million users.

Do people really want to shop via text?
Shopping via text isn't for everyone. Those that like to comparison shop will likely want to do more research on items that a sales associate suggests. But more affluent customers seem to respond better to shopping-related text exchanges.

A study from The Luxury Institute found that 20% of affluent customers are comfortable receiving unprompted product suggestions. That number rises to around 50% when the product is related to a previous purchase and just went on sale. Seventy-one percent say they appreciate receiving a text when an item they wanted comes back in stock. I'd venture to guess even non-affluent customers appreciate alerts when a product they wanted is now available.

These data are all good indicators for Nordstrom's potential success with TextStyle. The department store caters to affluent customers with its upscale clothing. It's been using text to interact with customers since last year, but the new TextStyle functionality allows customers to make purchases right from their texting app. Having one more touchpoint on mobile to make sales could improve the company's conversion rates on smartphones. 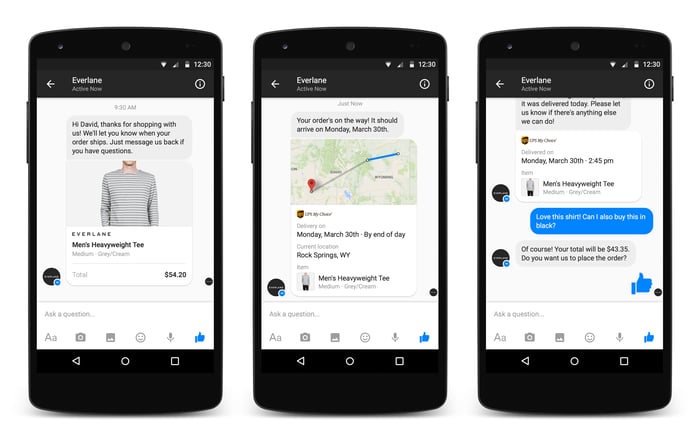 Facebook is also developing a virtual assistant for Messenger called M, which uses a deep learning AI algorithm in combination with human trainers to provide a mashup of mobile search and concierge services including shopping. Users could prompt M with the same thing Nordstrom provides in its TextStyle example, "Hey, I really need a new pair of shoes for a party next weekend," and receive a suggestion from any retailer custom tailored to their tastes.

Nordstrom's efforts to go it alone are a signal that there is demand for such a product from retailers, and surveys indicate that there's demand from customers. With 700 million active users with a heavy concentration in the United States, Messenger is the ideal platform to bring both together.

Facebook's current goal is to get as many retailers and other businesses on Messenger as possible and make it commonplace for users to interact with businesses via Messenger. It's ushering users toward Messenger with redesigns of Pages and it's reportedly testing ads that prompt users to message businesses. Once Facebook has built up a critical mass of businesses on Messenger, it can figure out how to monetize them.

Investors have been badgering Facebook for how it's going to monetize Messenger ever since it severed the integration of the chat app and its flagship product. CEO Mark Zuckerberg told analysts this summer that the game plan for monetizing Messenger is the same as Facebook and it will take years to see the results. With Nordstrom's newest efforts on mobile, it appears Facebook may be closer than initially thought.