Many have applauded the decision of General Electric (NYSE:GE) to divest itself of its financial holdings. These businesses have proven to be a millstone around the company's neck in recent years. The bulk of them have now been spun off as Synchrony Financial (NYSE:SYF), which mostly provides store credit cards for such retailers as Gap and Amazon.

In the year prior to Synchrony's IPO, GE's stock price only appreciated by 3%. Since the IPO, though, each stock has fared far better, with Synchrony's handily outpacing GE's: 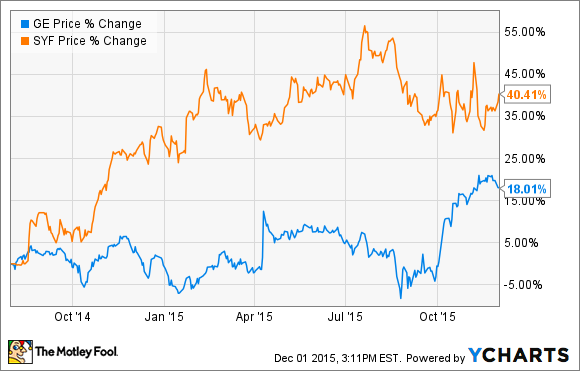 After the IPO, GE still owned about 85% of Synchrony's shares. But in October, they began a stock swap that appeared to be a bargain: GE shareholders could trade $100 of their GE stock and get $107.50 of Synchrony shares in exchange. This offer not only reduced GE's float by 6.6%, but was a major step forward in separating the two companies

Besides getting these riskier, non-core assets off GE's books and retiring some 671 million shares of its stock, there may be another big benefit for GE and its shareholders ... if the government cooperates.

After the collapse
During the financial crisis, GE's financial businesses -- collectively known as GE Capital -- were hit hard. The stock price of the entire company suffered.

GE wasn't alone. Many financial institutions went under or needed emergency government bailouts to stay afloat. Government regulators decided to implement regulations to prevent such widespread chaos in the financial markets. And so the SIFI was born!

Most SIFIs are banks ... but the government recognized that not all the institutions active in financial markets are banks, and so four U.S. non-banks have also been designated as SIFIs: insurers AIG, Prudential Financial, MetLife ... and GE Capital.

What makes a SIFI a SIFI
The government was very clear about its criteria for SIFI designation. These consisted of 10 statutory considerations, including "the importance of the company as a source of credit for households, businesses, and State and local governments."

GECC is a significant source of credit to the U.S. economy, providing financing to both commercial and consumer customers. In 2012, GECC had outstanding credit to more than 243,000 commercial customers and 201,000 small businesses, as well as credit extended to 57 million consumers in the United States. ... The Council has made a final determination that...GECC should be supervised by the Board of Governors and be subject to enhanced prudential standards.

There's no doubt that GE Capital was a SIFI then. The trouble is, the designation still applies to the remnants of GE Capital retained by General Electric now.

This is problematic for GE's shareholders, because those "enhanced prudential standards" place capital and liquidity requirements on GE Capital that limit the amount of cash it can return to the parent company and its shareholders. GE had planned to return $35 billion to shareholders via the GE Capital exit. Not to mention, capital and liquidity that's tied up in GE Financial can't be strategically deployed to grow GE's other businesses...or its currently frozen dividend.

No exit
The government was very transparent about how a company attains a SIFI designation. The trouble for GE is that the government has been completely opaque as to how such a designation can be removed. In a July meeting, the Fed granted GE a temporary reprieve from some of the SIFI requirements, but declined to offer any direction on how it could go about "de-designating" itself.

What's unclear is how long GE might have to wait or how many additional hurdles it will have to clear to remove its SIFI designation -- if it can remove it at all. And for investors who have already jumped into the stock anticipating the removal of the SIFI regulations, this is not a welcome development.

Sooner or later, GE will probably be able to unshackle itself from the SIFI regulations and reward its shareholders with the full fruits of the GE Capital divestiture. But nobody knows how long that will take. If the Fed drags its feet, some impatient investors might decide to head for the exits and the stock price will take a hit. Which will be bad for you if you're long GE.

That said, if you're considering selling GE, remember that "good things come to those who wait." Even with the SIFI designation still active, GE's share price has been on the rise. Even juicier returns may be just around the corner.