Is the struggling retailer a good value… or a value trap? 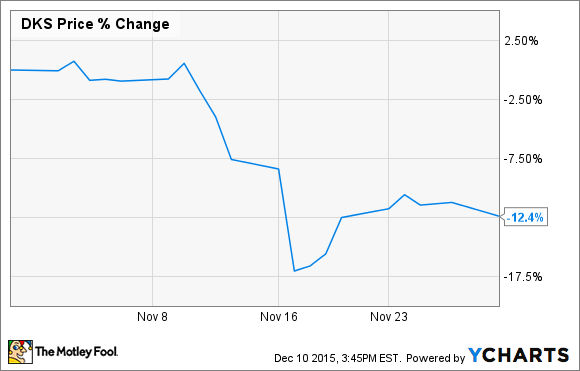 Warm weather hurt sales of Dick's seasonal categories, said CEO Edward Stack in a press release, and he expects "a more promotional environment" in the fourth quarter. That will likely put pressure on Dick's profit margins in its most-important quarter of the year.

Now what: With the sporting-goods retailer now down more than 20% on the year, and trading near multi-year lows, some investors are beginning to look at Dick's Sporting Goods as a value play. I would urge caution, however, with such an approach.

Many of the problems facing the company are structural in nature. The main concern is that, as a primarily brick-and-mortar retailer, Dick's Sporting Goods is at a cost disadvantage to e-commerce retailers. In addition, its two major suppliers, Under Armour (UAA) and Nike (NKE -0.34%), are steadily growing their direct-to-consumer operations, making them less reliant on Dick's with every passing year. As such, for investors looking for an investment in the athletics goods space, they may be best served by passing on Dick's Sporting Goods in favor of one -- or both -- of these sports apparel titans.

Joe Tenebruso has no position in any stocks mentioned. The Motley Fool owns shares of and recommends Nike and Under Armour. We Fools may not all hold the same opinions, but we all believe that considering a diverse range of insights makes us better investors. The Motley Fool has a disclosure policy.