GE hasn't delivered for investors in the past decade, and we think there are better options for the future.

Over the past decade, GE (GE 2.58%) has been an awful stock to own. If it weren't for its generous dividends, investors holding GE would have lost money. 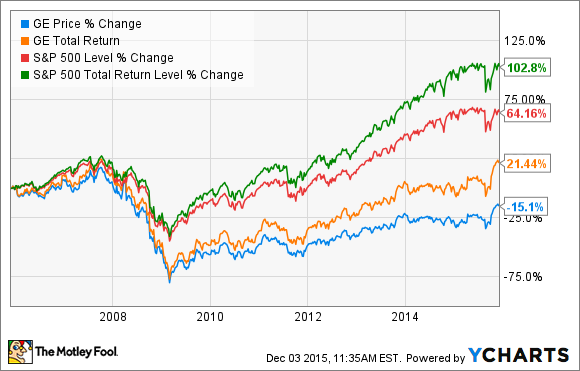 On the other hand, those simply holding on to a market index like the S&P 500 would have nearly doubled their money on a total return basis. That said, buying into an average will only deliver average returns. For investors looking to be better than average, we have three stocks that we believe will not only beat GE but deliver market-beating returns.

Brian Feroldi
Investors who are thinking of putting money to work in General Electric are likely drawn to the company's dominant market position, business stability, and generous 3% dividend yield. If that's the case, then they might want to consider investing in healthcare giant Johnson & Johnson (JNJ -0.39%) instead, as it offers all of those same desirable traits at a much better valuation right now.

Johnson & Johnson holds a dominant position in most markets in which it competes. The company claims that 70% of its revenue is generated from products that are either the No. 1 or No. 2 market share leader. That's quite an impressive accomplishment when you consider that it currently owns 265 different operating companies that sell countless individual products in 60 different countries around the world. That leadership position provides the company with dependable revenue streams and great earnings visibility, which allows it to return the majority of its profits back to investors in the form of regular share repurchases and an ever rising dividend, just like General Electric does.

Andres Cardenal
If you are looking for a big and solid global corporation that pays reliable dividends, then PepsiCo (PEP -0.35%) looks like a smart purchase. The company owns 22 brands making over $1 billion each in global revenue. Besides, PepsiCo's gargantuan distribution network and massive marketing budget provide additional layers of competitive strength.

Soda consumption in developed markets is declining due to health considerations. However, PepsiCo has done a great job of diversifying its portfolio of drinks and snacks with healthier brands such as Gatorade, Quaker, and Tropicana. In addition, management is planning to save $5 billion in annual costs over five years via productivity enhancements.

PepsiCo has increased dividends uninterrupted over the last 43 years, quite an outstanding track record of consistency. Management is committed to distributing 60% of earnings as dividends, so investors have valid reasons to expect sustained dividend growth in the future. The stock is paying a dividend yield of 2.8%, and PepsiCo is returning $9 billion to investors via dividends and buybacks in 2015. 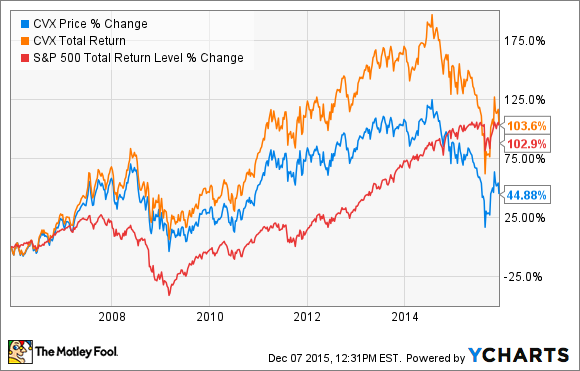 In fact, it's this recent drubbing that makes Chevron such a compelling long-term investment opportunity right now. Clearly, the oil market is in a funk with just too much oil chasing weaker-than-expected demand. However, it's a situation that's slowly beginning to heal even without OPEC stepping in and bailing the market out. That's due to the simple fact that low oil prices have always been the cure for low oil prices.

What this means is that the current low price of oil is fueling incremental demand for crude, with demand expected to grow by 1.8 million barrels a day this year and 1.2 million barrels a day in 2016, according to the International Energy Agency. At the same time, weak oil prices have forced producers to cut back on investments on new oil projects, which is expected to cause worldwide production to roll over. Current estimates suggest that production in North America alone could decline by about 900,000 barrels per day by the end of 2016. It's the combination of increased demand and decreased supply that is expected to rebalance the oil market at some point in 2016, leading to higher oil prices.

That's quite a near-term catalyst for Chevron's stock in 2016, making it, in my mind, the easy choice over GE.