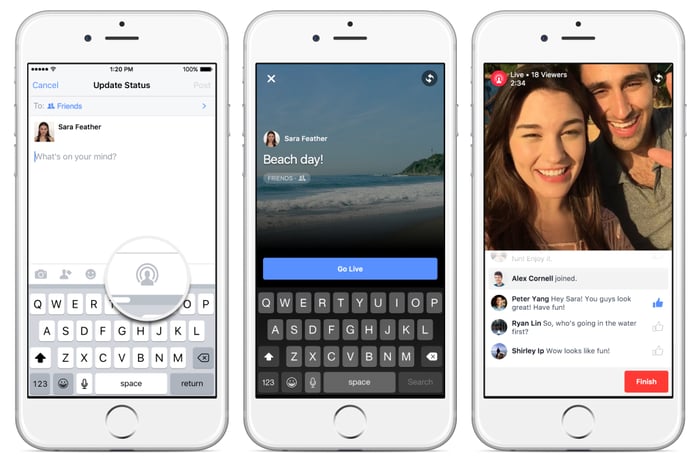 Sharing well-edited, scripted videos is so 2014. This was the year live streaming from your mobile device really took off. Twitter (NYSE:TWTR) introduced Periscope a few weeks after Meerkat stormed the market and Twitter timelines. YouTube helped Samsung integrate live streaming directly into its new phablets released in August. Amazon.com's (NASDAQ:AMZN) Twitch.tv has moved to integrate more iOS and Android games with its game-streaming app. And Snapchat continues to be the most popular not-quite-live video messaging app available.

Now the 800-pound gorilla is officially entering the market. Facebook (NASDAQ:FB) announced earlier this month that it's extending the live video streaming functionality it added to its Mentions app this summer to regular old Facebook users like you and me, starting with a small percentage of people in the U.S. on iPhones. Within the next few months, if the test goes well, 1.55 billion global users will have the option to stream live video every time they go to update their status. And the odds are that this move will benefit Twitter, Amazon, and Alphabet (NASDAQ:GOOG) (NASDAQ:GOOGL) investors if the companies react strategically.

Many have already experienced similar live-streaming experiences in apps such as Periscope and Meerkat. Periscope reported that it had 10 million users within four and a half months of launching.

Many others have at least watched a live-streaming broadcast on YouTube -- a subsidiary of Google, an Alphabet company -- or Twitch.tv. Twitch has 100 million highly engaged monthly active users. And still more have used Snapchat to send funny in-the-moment (but not quite live) videos to friends. Snapchat has over 100 million daily users watching more than 5 billion videos per day.

Meanwhile, Facebook has sat in the background, growing its video business largely on the back of a few legitimate video creators and lots of people reposting videos scraped from YouTube and other video sites. The company reported during its most recent earnings call that its users now watch 8 billion videos per day, increasing from just 1 billion a year ago.

Facebook will make live streaming mainstream
The advantage live streamers have with Facebook is that they already have a built-in captive audience of friends to live-stream to. They don't have to ask them to join another app or go somewhere on the Web that they only go to once in a blue moon. Users are on Facebook all the time. Twenty percent of time spent on mobile is done on Facebook, according to the company. And Facebook's user base is an order of magnitude greater than any other live-streaming platform in existence, save YouTube, which was built on the back of pre-recorded video.

Facebook can make live streaming go viral. Close friends will get an alert when someone starts live-streaming, which means people will be exposed to this feature automatically, without having to do anything more.

The result may be that more people seek out where they can live-stream more content. Do they want to see into the lives of more celebrities? Try Periscope and Meerkat -- although Facebook is working on building relationships with celebrity streamers as well. Want to watch e-sport champions play their favorite games? Try Twitch.tv and YouTube Gaming. Surely more apps in more niches will pop up as live streaming goes mainstream.

Riding in Facebook's wake
All of the companies mentioned here have the opportunity to capitalize on Facebook's efforts to increase live streaming in its own app, but they have to react to market demands.

Twitch.tv already has a loyal user base of creators and viewers, but it may need a better monetization strategy to keep creators from abandoning it for something else. Periscope has a growing user base, but it could integrate more tightly with Twitter's flagship product to get the most out of its existing social network. YouTube sees over 1 billion viewers per month, but only a small subset knows it can watch live-streaming content, and even a smaller subset knows how to stream video itself.

Facebook is integrating live streaming into a feature that many of its users access on a daily basis, giving it huge exposure. Live-streaming apps need to figure out how to do the same thing for themselves, especially as consumers look for other outlets for live-streaming video.