Through economic booms, busts, and everything in between, income investors have been able to count on annual dividend raises from Procter & Gamble (NYSE:PG) as a near certainty. After all, the consumer-goods giant hasn't missed a hike in 59 years, for one of the longest track records in the stock market.

Yet P&G's operating results are under unusual pressure these days. Organic sales growth has stalled. And foreign currency swings have blown a big hole in reported profits. As a result, P&G's payout ratio, or the percentage of earnings that's taken up by the dividend, is at distressingly high levels: 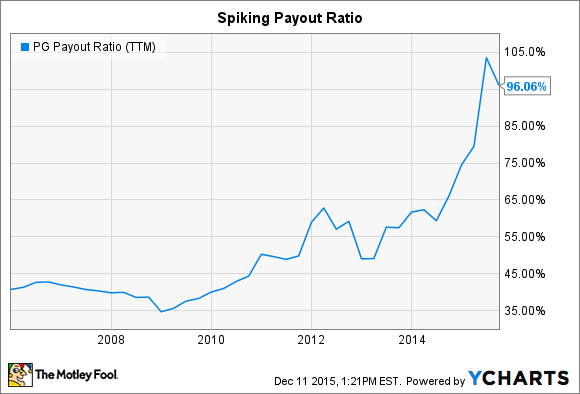 This ratio doesn't account for P&G's strong cash generation and ample profit reserve, which practically ensure that the company will boost its dividend in 2016, regardless of sales growth. But it's still worth considering whether that raise will be tiny relative to what investors have come to expect from P&G.

How P&G got to a more than 100% payout ratio
The most recent fiscal year was a rough one for the business. Fiscal 2015 sales decreased by 5% as P&G suffered a 1% volume decline in each of its five key product categories. That performance significantly lagged rivals like Unilever (NYSE:UL), whose volume rose 4%. Unilever also projected organic sales gains of as much as 4% this year compared to P&G's expectations for flat growth.

Those unfavorable exchange moves also contributed to a decline in profitability -- despite management's success at cutting out billions of dollars of costs from the business. Operating margin sank to 15.5% from 18.3% last year. Overall, earnings sunk 40%, to $7 billion, or $2.44 per share.

P&G paid out $2.59 per share in dividends during that time period, raising its payout ratio to more than 100%. By comparison, the long-run average for most companies is closer to a 50% payout.

Yet the situation isn't as dire as the skyrocketing payout ratio suggests. For one, most of P&G's profit decline can be tied to foreign currencies falling against the U.S. dollar. That's a headwind that can't continue for long, and in fact, it should eventually move in P&G's favor again. Second, the company's reported sales and profit growth were both held back by the company's brand-shedding initiative. Management has been slimming the company down, selling off pieces like the battery and pet-food divisions so it can focus on the product categories with the most promising profitability and sales-growth trends. The result should be a more-flexible, more-profitable business.

Why the dividend will rise in 2016
To get an idea of the long-term support behind P&G's dividend, cash flow is a better metric for investors to watch than reported earnings. The good news for shareholders is that cash flow is near a record high: Annual operating cash has improved $15 billion, even as reported earnings sunk during the last few years. 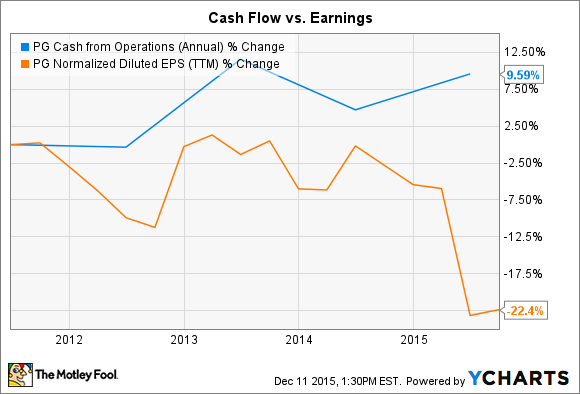 Meanwhile, the company generates enough cash to spend heavily on stock buybacks. Share repurchase spending was $4.6 billion last year compared to $7.3 billion of dividend checks. Even if earnings don't sharply improve in the next year, management could simply dial back its stock buyback spending to fund a 2016 dividend hike.

P&G's latest outlook calls for another year of flat sales, as earnings decline slightly. Thus, the company may pay out close to 100% of its reported profits as dividends for the second-straight year. But ample cash flow should ensure that income investors get a dividend boost when P&G updates its dividend in April, likely on par with last year's 3% raise.