The central bank raised interest rates for the first time in nine years today, and Wall Street reacted by sending indexes up sharply.

Stocks were up slightly before the Federal Reserve made its highly anticipated announcement today – and then they really took off. The Dow Jones Industrial Average (^DJI -0.27%) gained 223 points, or 1.3%, and the S&P 500 (^GSPC -0.81%) added 30 points, or 1.5%. The boost was enough to put the Dow back into positive territory for the year, but the S&P remains slightly in the red. 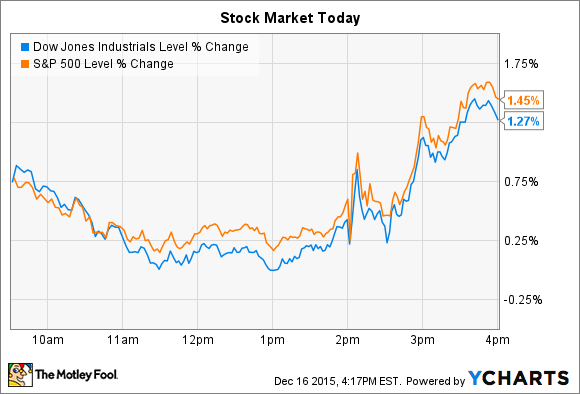 The end of zero rates
"The Committee decided to raise the target range for the federal funds rate to 0.25 to 0.50 percent." That sentence out of the Federal Reserve today effectively ended a seven-year period of near-zero interest rates.

As expected, the central bank boosted the lower limit of its rate range from 0% to 0.25%. All 10 officials on the committee voted for the hike, which the committee saw as well supported by a strengthening job market.

Yet the pace for future raises is likely to be slow and steady. According to the latest Fed projections, the rate won't reach 2% until 2017. The federal funds rate isn't likely to approach what officials see as the long-run target of 3.5% until at least 2018.

First Solar's tax bonus
First Solar was the biggest percentage-point gainer on the S&P 500, jumping 10%, and setting a new 52-week high. The spike was driven by surprising tax news out of Washington, D.C.

Congress late last night reached a deal on tax cuts that included a five-year extension of the solar investment tax credit (ITC). The ITC provides a 30% federal tax credit to homes and businesses that choose to install solar energy systems, effectively making those products one-third cheaper to purchase. According to current law, the credit is scheduled to end for private residents, and plunge to 10% for businesses, at the end of 2016.

In its 10-K, First Solar describes the 30% ITC as a "primary economic driver of solar installations in the U.S.," and management warned that its scheduled step down creates "significant uncertainties" on the future of solar-market demand. While the tax deal still has to be approved by the rest of Congress, today's news removes that uncertainty, and ensures that First Solar will benefit from federal tax support until at least 2020.

Nucor's lowered outlook
Nucor was one of the market's biggest losers, falling 4% after the steel giant issued a weak fourth-quarter outlook. It sees earnings ringing in at $0.18 per share at the midpoint of guidance, while consensus estimates had Q4 profits pegged at a much stronger $0.48 per share. By comparison, Nucor had earned $0.65 per share in the prior-year period, and it booked $0.71 per share in the second quarter of 2015.

Management cited a number of issues as drivers for the soft expected performance. Profitability is falling thanks to "continued deterioration in global steel markets amplified by global excess capacity." At the same time, seasonal factors are hurting Nucor's commercial markets. Energy, heavy equipment, and agricultural markets are also weak. On the bright side, sales to automotive clients are up.

Yet the updated guidance implies that Nucor will earn $1.48 per share in 2015 -- 33% less than it managed last year. That drop is worse than Wall Street was expecting, and so it's no surprise that the stock fell as investors adjust to Nucor's weakening profit outlook.

Demitrios Kalogeropoulos has no position in any stocks mentioned. The Motley Fool recommends Nucor. We Fools may not all hold the same opinions, but we all believe that considering a diverse range of insights makes us better investors. The Motley Fool has a disclosure policy.

4 Southern Stocks to Buy Right Now (and 1 to Avoid)