The American South is known for its hospitality, humidity, and home cooking, but there's a lot more to be found there. It has a growing population of dynamic and skilled workers, a modern transportation infrastructure -- both sea and air -- that connects it to global markets, and geographic advantages that keep those assets functioning year-round. It also is more accessible to international markets than other regions.

All that adds up to make the south an ideal base for many of the world's biggest and best-known companies. But which are the best southern companies in which to put your hard-earned money? Four at the top of my list include Bank of America Corp (NYSE:BAC), Nucor Corporation (NYSE:NUE), Trex Company Inc (NYSE:TREX), and Home Depot Inc (NYSE:HD).

One of the best-known southern companies, The Coca-Cola Co (NYSE:KO), however, is one that I think is best avoided for now.

Two stocks set to profit from a strong housing market

Over the past few years, the U.S. housing market has turned a corner and returned to growth. And with a relatively healthy economy, more people are spending money on home-improvement projects. That's been wonderful for Home Depot and Trex, which have absolutely trounced the market over the past five years: 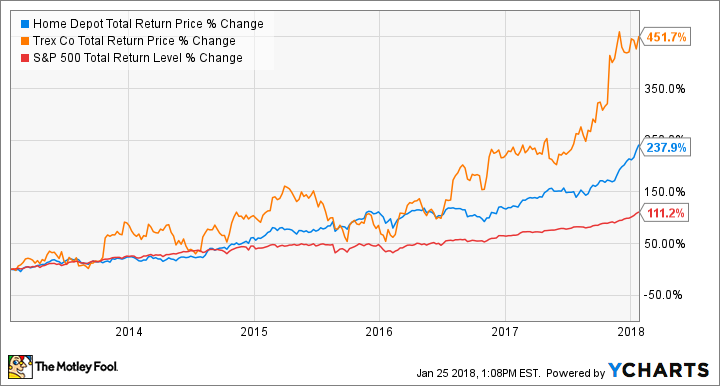 There's good reason to expect them to remain strong investments going forward, too.

For Home Depot, the opportunity is less about rapid growth -- 90% of Americans live within 10 miles of a Home Depot store -- and more about continuing its long-term strategy of steady growth and market-share expansion. One of its major initiatives is "One Home Depot," its omnichannel strategy to align e-commerce and bricks/mortar. The company says it's paying off: Online sales make up more than 6% of the company's total and are growing, with many of those orders being picked up at local stores.

As a more mature company, Home Depot is also ramping up its returns of cash to shareholders. It only yields around 1.7% at recent prices, but management has more than doubled the dividend over the past five years and intends to continue raising it, as long as the economic environment generates earnings to support that. With a payout ratio below 50%, there's a wide margin of safety built in that should keep the dividend secure, even if the economy turns south and hurts earnings for a period of time. 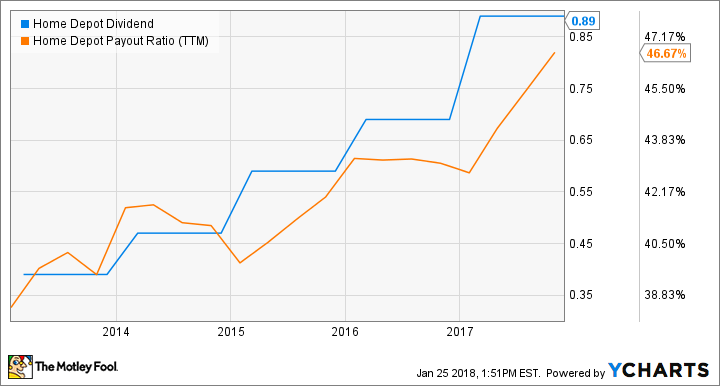 Trex, like Home Depot, is the biggest player in its space, commanding nearly half of the wood-alternative-decking market. It also has steadily increased its market share for years. But there's one major difference in their investment stories: Trex is a high-growth opportunity. Since 2010, it has doubled sales, but only surpassed $500 million in revenues last year. Even with a commanding share of alt-wood decking, there's room to grow much bigger, since Trex's decking accounts for far less than 10% of total (wood included) board feet of decking sold in North America. On a global basis, Trex has even less presence.

Trex has another functional advantage: its status as a green product. Trex products are made from recycled materials and designed to last for decades without the annual application of chemical treatments and stains that wood decking requires. As a result, more younger, environmentally conscious homeowners will gravitate to Trex.

Like Home Depot, the cyclical nature of the economy and housing market will cause sales to ebb and flow. But over the long term, Trex remains one of my best growth ideas.

The steelmaker for any season

Over the past 40 years, Nucor has steadily expanded its operations to become the biggest steelmaker in North America, and made shareholders a fortune. The secret to the company's success? First, it has a business model that helps it operate profitably during the ups and downs of the steel cycle, while its peers struggle. And second, Nucor has had incredibly talented CEOs during this period, who have allocated the company's capital very effectively. That strategy still pays off today and should continue well into the future.

As things stand today, steel demand is strong in the segments and markets that Nucor participates in, though pressure from imports has weighed on steel prices and hurt domestic producers on and off for a number of years. Nucor has been less impacted by this than its domestic peers because of its operational flexibility, but it has had an affect on the bottom line. 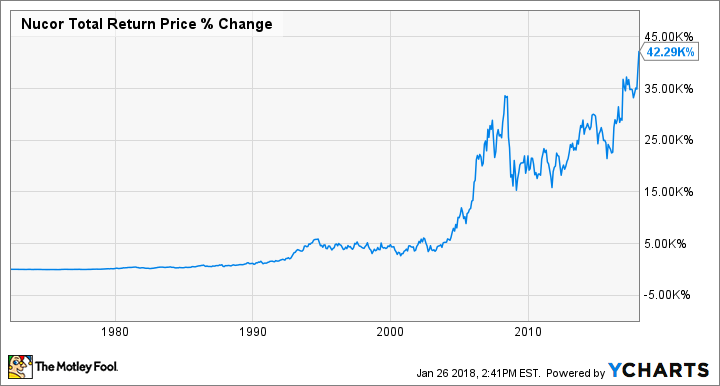 The good news is the federal government has taken some action, and is on track to take more. Much of this imported steel is being illegally subsidized by its country of origin, artificially deflating prices and giving importers an unfair advantage beyond their actual abilities to compete. The company's guidance for its fourth-quarter earnings, which will be released on January 30, reflects the pressure of imports on the current market, but management is optimistic that trade balance is on track to being restored as prices are starting to increase and imports are starting to decline in some product segments.

Tariffs on a number of steel imports have already been implemented, and more are coming. This should improve prices and drive higher volumes for domestic steel. Combined, that's a double boost for Nucor's bottom line down the road. Factor in the recent cut in U.S. corporate tax rates, and Nucor's earnings could be substantially higher in another year or two. Shares may look pricey at 20 times trailing earnings, but as steel prices and imported market share normalizes, Nucor is primed to profit.

A turnaround story worth investing in

Only a few years back, Bank of America was a mess. The megabank had billions of dollars in bad loans on its books, and billions more in legal headaches coming out of the Financial Crisis. It was also generally regarded by many people as exactly what was wrong with American financial institutions, since thousands of the bank's mortgage customers were harmed by the bank, its subsidiaries, or its acquired companies' lending practices.

Fast-forward to today, and BofA has been one of the best turnaround stories in banking. Its balance sheet has improved, it's a few years removed from its legal problems stemming from the housing crisis and bad acquisitions, and its operating results are starting to drive better financial returns. This has been a boon for patient shareholders: 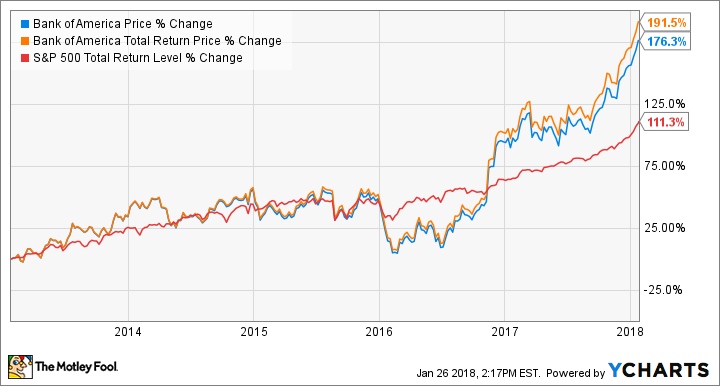 While the S&P 500 has generated more than double the total returns over the past five years, Bank of America shareholders have nearly tripled their money, with 192% in total returns. A significant portion of these gains was based simply on the market being willing to pay a higher premium to invest in the bank. 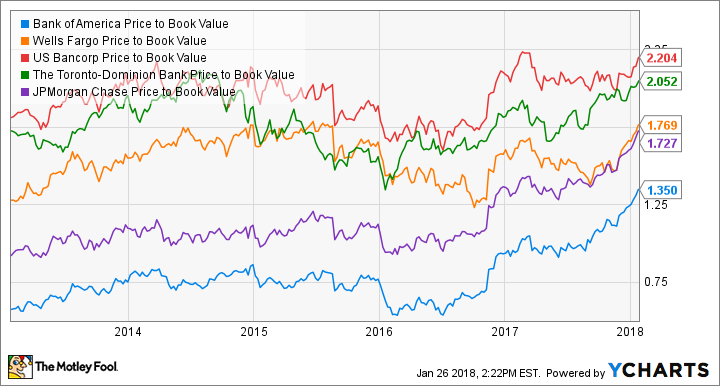 Also, don't let its earnings multiple lead you astray. Like most banks, Bank of America took a one-time hit last quarter related to the change in the U.S. corporate tax rate. This dinged its earnings in the quarter by a whopping $3 billion, a big reason why its price-to-earnings (P/E) ratio spiked to nearly 21 times when earnings were announced: 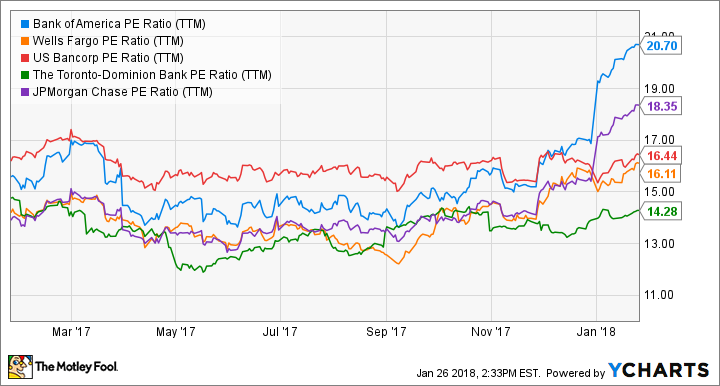 On the surface, that makes it look incredibly expensive, and more pricey than its peers. However, that one-time charge is because of something that will lead to bigger profits going forward: a much lower corporate tax rate. If we look at BofA's forward earnings valuation, at 12.8 times, it's actually one of the cheapest big banks: 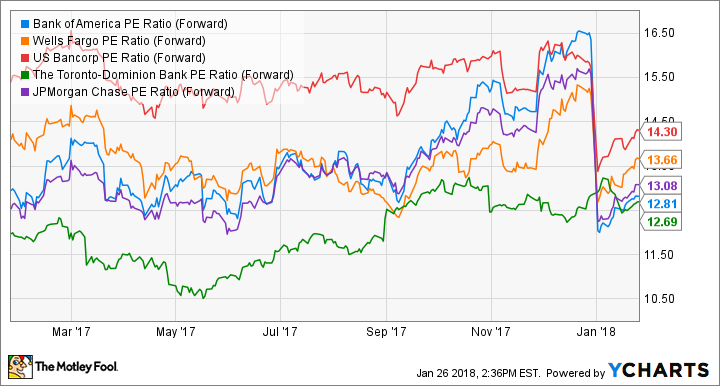 As Bank of America's financials continue to improve with each passing quarter, its steady management, along with lower tax rates and rising interest rates, should boost its earnings. Now may be a great time to add the company to your portfolio.

This legendary investment is getting a little flat

Few brands are as well-known around the world as Coca-Cola. Its white scripted logo on a red background is as recognizable as they come, and the company has generated billions of dollars in wealth for millions of investors over the decades. Its dividend growth alone is a remarkable testament to the strategy of buying high-quality companies that can steadily grow their earnings, and then hold them for as long as possible.

But I don't think investors who buy shares of Coke today are likely to do nearly as well as past investors, and may struggle simply to generate market-level returns over the next five or 10 years. The reality is, the company is swimming upstream against changing consumer tastes, and its strategy to broaden its beverage portfolio into areas of consumer growth has been slow to take shape. At the same time, the company has made a big strategic change in its operations, transitioning out of the bottling business and selling those operations to franchise bottlers.

This has put some pressure on its bottom line and balance sheet, with a significant reduction in its intangible asset value, including goodwill related to branding. This has caused its earnings to fall sharply. Its actual cash flows also have suffered over the past few years: 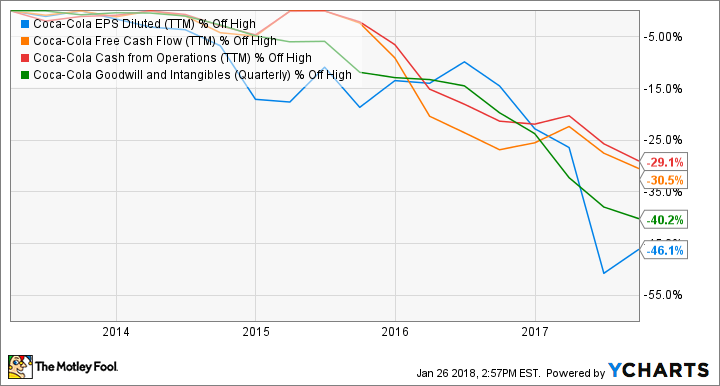 Even with Coke's weakening operating results, the market has pushed its stock price higher, in large part because of its steady, reliable dividend. And it's not all bad news: Its portfolio expansion is starting to pay off. Organic sales -- brands it has owned for more than one year -- increased 4% in the most-recent quarter, and that bodes well for an eventual turnaround.

At current market prices, however, Coke carries an extremely high valuation that creates a lot of risk of losses for investors. Coke remains well-run and a powerful global brand. That, I think, is enough to make it worth holding for long-term investors, but its modest earnings-growth prospects are far out of alignment with the premium price the market is currently paying for shares.