Please ensure Javascript is enabled for purposes of website accessibility
Log In Help Join The Motley Fool
Free Article Join Over 1 Million Premium Members And Get More In-Depth Stock Guidance and Research
By Matthew Frankel, CFP® - Dec 18, 2015 at 7:40AM

2015 was not a particularly strong year for IPOs, but these five did quite well.

It's not too hard to see why that may be -- the IPO market has cooled off considerably. The share prices of companies that went public in 2014 are up by an average of 21% as of this writing, and companies from the class of 2013 are doing even better -- up 40% on average. Meanwhile, the average 2015 IPO has averaged a total shareholder return of negative 5%.

Among the 169 companies to go public this year, there have been some standouts, and a few 2015 IPOs have actually doubled in value since their debut. In terms of share price, the top five IPOs of 2015 are:

4. Aclaris Therapeutics (ACRS 7.33%) -- up 106.1% since IPO
The most recent IPO on this list, Aclaris went public on Oct. 6 at an offer price of $11. Specializing in topical treatments for dermatologic conditions, Aclaris has a promising seborrheic keratosis drug in late-stage development.

3. Collegium Pharmaceuticals (COLL 8.59%) -- up 106.3% since IPO
Collegium went public in May, and aims to develop treatments for chronic pain that do not lead to addiction. The company's DETERx microsphere technology is designed to take commonly abused pain medications and deliver them in a time-release, crush-proof manner. The leading product is an extended-release formulation of oxycodone, which has received fast-track designation from the FDA.

2. Seres Therapeutics (MCRB 2.05%) -- up 110.6% since IPO
Seres went public in June at an IPO price of $18, and rocketed to $51.40 on its first trading day. While it has since cooled off a bit, investors seem to have an optimistic view on this developer of microbiome-based therapeutics. The company currently has one promising product (SER-109) in late-stage development, and another five in the pipeline.

1. Spark Therapeutics (ONCE) -- up 119% since IPO
Investors were excited about Spark's January IPO, and it's not too difficult to see why. The company is a leader in gene therapy, and is developing some potentially life-changing products, including its most advanced product candidate, which is in the latest stages of development and is intended to treat blindness caused by certain genetic mutations.

It should be no surprise that the top four are all pharmaceutical companies. Not only is this type of company rather volatile in general, but the healthcare sector represented 46% of the companies that went public in 2015.

Why most investors didn't actually get all of these gains
Now, it's also worth noting that IPO performance data should be taken with a grain of salt. Specifically, unless investors actually got in at the IPO price -- which is often easier said than done -- they wouldn't have gains anywhere close to some of the numbers listed here.

For example, consider the case of Shake Shack. The company went public on Jan. 29 at an IPO price of $21. However, by the time it opened for public trading, the share price was $47. In other words, if retail investors who didn't get in on the IPO bought shares as quickly as possible, they would be down now, not up by 91%. 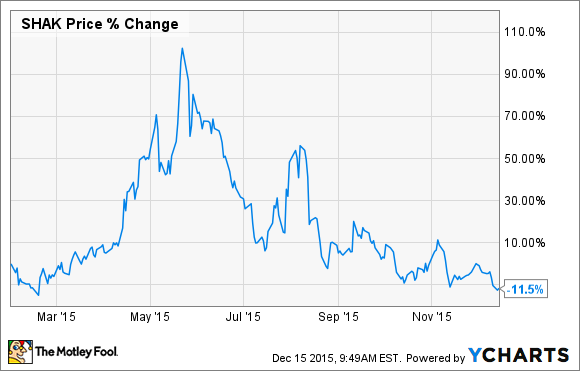 One thing is for certain: IPO investing is volatile, and while some IPOs double in their first year, many others get hammered. It's fun to read about the winners, but most IPOs are speculative investments and should be treated as such when making investment decisions.

These 2 Stocks Are Undeniably Cheap