Please ensure Javascript is enabled for purposes of website accessibility
Log In Help Join The Motley Fool
Free Article Join Over 1 Million Premium Members And Get More In-Depth Stock Guidance and Research
By Keith Noonan, Rich Duprey, and Daniel B. Kline - Dec 19, 2015 at 8:18AM

Big discounts on merchandise could eventually drive shares of these retailers down to fire-sale prices.

Discounting can be a great way for companies to drive store traffic and move inventory, but slashing prices can also bring big risk. Poorly timed price reductions and discounting the wrong items can damage retail brands and create sales and profit erosion that sends stores into tailspins. Just ask clothing retailer Aeropostale, which tried to combat falling sales with liberal discounting of its merchandise that further weakened the appeal of its products and drove its stock to the point of near-worthlessness in just a few short years. 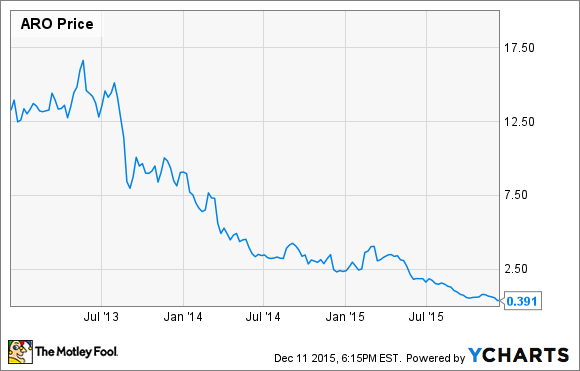 To get an idea of which retailers could suffer a similar fate, we asked three Motley Fool contributors to weigh in on a company that's at risk of discounting itself into a death spiral. Read on to learn why J.C. Penny (JCPN.Q), Macy's (M 2.27%), and Abercrombie & Fitch (ANF 3.20%) are in the discount danger zone.

Daniel B. Kline (J.C. Penney):  When Ron Johnson took over as J.C. Penney CEO, he had the novel idea of getting rid of sales and simply offering good values at all time. It was a good idea in theory, and one that could have led to steadier traffic rather than the peaks and valleys most stores experience.

The problem is, customers hated it. People had become used to shopping the sales and getting a special deal.

Johnson, before he was kicked out of his position, reversed his own strategy and had begun to bring sales back. His replacement, Mike Ullman, who was also his predecessor, brought back the company's previous discounting strategy, and newly appointed CEO Marvin Ellison took it to the next level over the holiday season.

In some ways his strategy worked. On the surface, big discounts brought people into J.C. Penney's Thanksgiving and Black Friday sales. The problem is that while people did shop at the chain, they only spent $42 each on average, down 28% from last year, according to InfoScout.

It seems clear from the numbers that people were shopping only to pick up the biggest deals. That's a failing strategy in the long term because loss leaders don't work if people don't also make impulse buys.

The Christmas season illustrates the problem facing J.C. Penney. It lost much of its customer base during Johnson's time at the top. Now, to entice customers to return, it has to outprice its rivals. That would be OK if it had something beyond deals to woo people once they arrive.

But it doesn't, and if Ellison can't find a way to lure traffic without deep discounts, he'll preside over busy stores that slide into oblivion.

Rich Duprey (Macy's): Macy's is pursuing a retail strategy fraught with risk. With sales falling more than 5% to $5.9 billion as comps declined 3.6%, it is determined to march forward with its plan to open up a series of off-price stores called Backstage. It intends to have six such stores opened by the end of the year, with many more to come in 2016.

The risk associated with this venture is that in building these stores from the ground up, they're a new business model, one not directly comparable to the outlet stores Macy's operates through its Bloomingdales division. They will feature name-brand and private-label merchandise that's designed specifically for the stores, a strategy that other retailers have found problematic. Handbag maker Coach, for example, had to put the brakes on its outlet-store expansion because sales from the factory stores were cannibalizing those of the full-price ones. Shoppers found they could still get the same Coach cachet but at a cheaper price, and the handbag maker's sales plummeted.

Moreover, once enticing consumers with sales, it is difficult to wean them off the discounts afterwards. As Dan pointed out, J.C. Penney sensibly tried to initiate an everyday low price policy instead of manufactured doorbuster sales, and it nearly went bankrupt. Only by reinstating regular discounting has the department store come back from the brink.

Others are just learning that lesson now, too. Tween retailer Justice is going through some very awkward growing pains as it attempts to transition away from "gimmicky" sales, while men's-suits retailer Men's Wearhouse discovered eliminating its Jos. A. Bank division's buy-one-get-three-free policy has all but eviscerated sales.

Macy's is attempting to grapple with a declining sales situation by essentially burning the furniture to heat the house. It may quickly find that the lure of quick sales from an off-price outlet chain ends up becoming a parasite with a voracious appetite that can't ever be whetted.

Keith Noonan (Abercrombie & Fitch): Finding similarities between Abercrombie & Fitch and Aeropostale is slightly more challenging than finding a cold day in December. Abercrombie's collapse hasn't been as severe as that of its rival, losing roughly 48% of its valuation in the last three-year period compared with Aeropostale's roughly 97% collapse, but a similar trajectory is on display.

Both of these struggling clothing brands were super popular in the late 1990s and early 2000s, creating pricing strength that drove high margins and elevated consumer value perceptions, but fashion trends have shifted significantly and the hurt has set in. From 2012 to 2014, Abercrombie's annual sales and diluted earnings fell 17% and 75%, respectively, and 2015 has been a difficult stretch.

Much like Aeropostale, Abercrombie has pinned its turnaround hopes on heavy discounting -- not a particularly attractive proposition for such a historically brand-oriented retailer. Consumers have sent the message that the brand isn't worth what it used to be, and Abercombie's implicit agreement stands a good chance of hurting demand rather than invigorating it.