Matthew Frankel, CFP®, Selena Maranjian, Dan Caplinger, Jason Hall, and Jordan Wathen
(TMFMathGuy)
Author Bio
Matt is a Certified Financial Planner based in South Carolina who has been writing for The Motley Fool since 2012. Matt specializes in writing about bank stocks, REITs, and personal finance, but he loves any investment at the right price. Follow him on Twitter to keep up with his latest work! Follow @TMFMathGuy

The end of 2015 is rapidly approaching, and many investors may be thinking about doing some tax-loss selling -- also known as tax-loss harvesting -- in their portfolios. However, it's important to be sure that you're selling for the right reasons, and not just to take advantage of a tax break. With that in mind, we asked five of our contributors to share some stocks they would consider selling right now.

Selena Maranjian: Avon Products (NYSE:AVP) is a stock I'd consider selling now for a tax loss. If you've been a shareholder in it, you're likely underwater, as its stock sports an average annual loss of more than 15% during the past decade, and has fallen by more than half during the past year.

What's going on? Well, business hasn't been good -- for quite a while. So much so that management is now looking to sell the whole company, very possibly to a private equity firm. Revenue has fallen by about a third since 2011, and free cash flow has been shrinking, while net income has been in the red for several years in a row. Competition in the cosmetics arena has been heating up in recent years -- with Ulta Salon and Sephora doing rather well -- and even Procter & Gamble is getting out of the cosmetics business.

Some might want to hang on to Avon Products for the hefty dividend -- it recently yielded a solid 6%. But it cut its payout from $0.23 per quarter to $0.06 per quarter back in 2012, and it's not unthinkable that it would reduce its dividend again.

Credit agency Fitch recently downgraded the company's Issuer Default Rating and its senior unsecured debt, citing concerns about shrinking profit margins and "little visibility of turning around the business today given the lack of a well-articulated business strategy." Avon might ultimately do well, but right now, its future is very uncertain, and shareholders could benefit by harvesting a loss here to offset other gains.

Matt Frankel: One stock I've considered for tax-loss selling is Transocean (NYSE:RIG). Generally when I buy stocks, I do so with the intention of holding on to them forever, but Transocean is a textbook example of when it's a good time to cut your losses and sell.

In a nutshell, the reasons I liked the stock when I bought it no longer apply. I first bought Transunion in early 2013, when shares were trading for about $55, and oil was in the neighborhood of $110 per barrel. 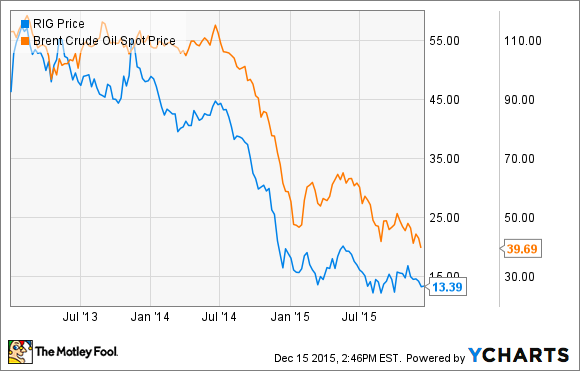 At that time, Transocean had an impressive $27.3 billion backlog of business, and had 82 rigs in operation with big plans for growth. Now, the backlog has dropped by 38%, to $16.8 billion, and the company continues to work through the backlog quicker than it is adding to it. There are now 62 rigs in operation, and the challenging energy markets have resulted in a number of rigs either idled or scrapped.

Further, I bought Transocean partially for its juicy $3.00/share dividend, which Carl Icahn had just successfully pushed the board into approving before oil started to decline. During the past year or so, the company's dividend has been slashed, and is now suspended.

Having said all of that, my position in Transocean is relatively small, so I haven't completely made up my mind about whether to sell or hold. My point is that, when the reasons you bought a stock don't apply any longer, it's completely understandable to contemplate getting out.

Jason Hall: Shares of video game retailer GameStop (NYSE:GME) are down 36% since late this summer, far worse than recent sales and earnings results would seem to dictate: 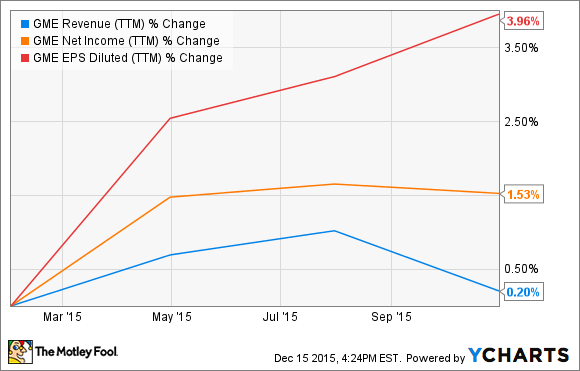 Why don't I view this as a buying opportunity? After all, Fellow Fool Rick Munarriz recently pointed out that there is a good reason to own shares, because the business is solidly profitable and relatively low cost to operate. And even if that business does steadily decline, it's not dead just yet.

But I'm concerned that GameStop's business model is going to start running out of steam sooner than later. Most importantly, I'm not willing to count on the company reinventing itself, which Rick alludes to in his article, as a viable investing thesis. Sure, the nearly 5% dividend yield is nice; but when things get tough, which they undoubtedly will within a few years, that dividend will be the first thing to go.

Digital music downloads obliterated the record store, and there's nothing to stop the same thing from happening with video games now. Eventually, that means GameStop's used game business will cease to be the cash cow it is today.

Sure, it could be a slow decline, and management may have enough time to find a new business to build around. But I'm not willing to bet on it happening slowly and management reinventing the company, especially as a best-case scenario. GameStop: I see the future. And you're not there.

Dan Caplinger: It's not often that you find a takeover candidate that's also a good choice for a tax-loss sale, but Keurig Green Mountain (NASDAQ:GMCR.DL) finds itself in that unusual position. The maker of household hot- and cold-beverage machines recently got a $13.9 billion buyout bid from European consumer-goods conglomerate JAB Holding, boosting its share by more than 70% in a single day.

The problem for many shareholders is that, prior to that buyout bid, Keurig Green Mountain had lost as much as two-thirds of its value just since the beginning of 2015. Those who bought the stock at its peak in late 2014 are still sitting on losses of more than 40%, and with a cash buyout price of $92 per share, the question isn't whether those unfortunate buy-high investors will take a loss, but when.

With the stock trading just a few dollars shy of the buyout price, there's little upside to holding onto Keurig shares. Yet those who have lost money on Keurig can easily sell their shares on the open market, and take advantage of their capital loss during the 2015 tax year, claiming it on their tax returns early next year. By contrast, if you wait until the deal's expected closing date, you won't be able to claim a loss until you file your 2016 tax return. For many, getting the tax loss earlier is worth accept a bit less than the full buyout price.

Jordan Wathen: Fifth Street Finance (NASDAQ: FSC) has had a rough year, plunging more than 23% year to date. The company has come under the fire of an activist investor and securities lawyers, making it the subject of class action lawsuits. Though its 11.7% dividend yield may be alluring, it's time to cut ties with the business development company.

On a recent conference call, insiders noted that the company's earnings would be depressed due to higher legal fees. Ordinarily, these fees are a burden to a fund's manager, not the fund itself. If Fifth Street decides to pay fees out of the Fifth Street Finance coffers, protracted activist campaigns and class action lawsuits could slowly drain shareholder wealth. It's my opinion that the best course of action is to simply realize the loss, walk away, and avoid legal risks that are almost impossible to quantify.