AT&T (NYSE:T) had a mediocre year, at least when it comes to its stock price, which sits roughly at the same place at the end of 2016 as it was in the beginning.

This is somewhat surprising, given that the company pulled off the massive $49 billion acquisition of DirectTV. That move was notable not only because it gave AT&T the ability to be the only company that could sell wireless and pay television nationally, but also because it received regulatory approval at all. In a year in which the Federal Communications Commission killed rival Comcast's (NASDAQ:CMCSA) bid to purchase TIme Warner Cable, that's a notable feat.

Still, while there was plenty of good news -- which can be seen in my story "The Best AT&T Headlines in 2015" -- the company also had its share of down moments. Not all were directly AT&T headlines, but sometimes the news others made proved to be less than good for CEO Randall  Stephenson's company. 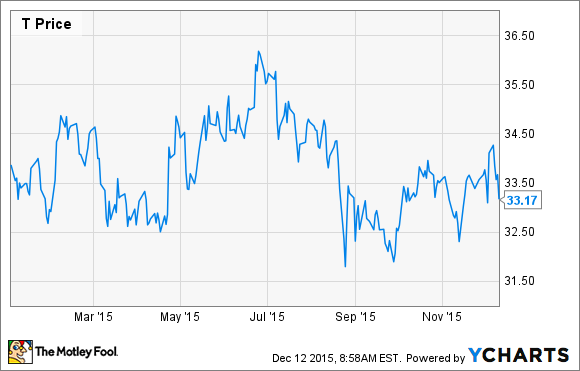 Comcast is becoming a wireless competitor
AT&T's chief advantage is that it can offer customers wireless, Internet, and cable service in the markets where it has ISP infrastructure. That's something rival Verizon can do in parts of the country, but it's an area where cable rivals were lacking.

That won't be true for much longer, as cable giant Comcast has announced plans to deliver its own wireless service. The new offering, which Bloomberg reported on, would operate over the Verizon network using Comcast Wi-Fi hotspots whenever possible. No launch date has been announced, but this type of wireless service partly over Wi-Fi can cost less to deliver than traditional service. That could allow Comcast to offer it cheaply.

More importantly, a Comcast wireless service would allow the company to compete with AT&T when it comes to bundling. That's a good offensive move that could win it customers and a good defensive one that might keep users from leaving for AT&T.

Cost is a big reason people switch wireless carriers
Perhaps the most troubling headline for AT&T in 2015 came from research done by Consumer Intelligence Research Partners showing that the key reason customers leave AT&T and Verizon was price. The report also showed, however, that the main reason people left lower-priced rivals T-Mobile (NASDAQ:TMUS) and Sprint (NYSE:S) was network quality.

"AT&T and Verizon appeal to consumers based on network quality, even though consumers think they cost more," wrote CIRP Partner Michael R. Levin on his company's Huffington Post blog.

The problem for AT&T -- and it could become the story of 2016 -- is that T-Mobile and Sprint are actually cheaper, and their networks are improving. Both lower-priced rivals have closed the gap between them and AT&T and Verizon in the twice-annual RootMetrics Wireless Network Performance Report. In fact, while T-Mobile and Sprint still sit at fourth and third, respectively, both now rate better than AT&T and Verizon did 12 months ago.

Currently, there is still a consumer perception that AT&T and Verizon have better networks, but the amount they lead by doesn't matter for many now, and it may cease to be a relevant differentiator in the near future.

This headline wasn't really bad news for AT&T in 2015, but it may be part of the reason it either loses wireless customers in droves or has to cut its prices in 2016. It may be a simple matter of consumer perception catching up to reality.

The FCC fines AT&T
While a $100 million fine is a veritable slap on the wrist for a company as large as AT&T, it still stung the company when the FCC ruled in June that it had misled mobile customers about what the word "unlimited" meant when it comes to their wireless plans.

The company was taken to task for its practice of throttling heavy users. That is, the company slowed down data speeds when customers used more than 3GB of 3G data or 5GB of 4G data in a billing cycle. The FCC's issue was not with the unpopular practice, but with how AT&T disclosed it to customers.

"Consumers deserve to get what they pay for," said FCC Chairman Tom Wheeler in a statement reported by CNN Money. "Broadband providers must be upfront and transparent about the services they provide. The FCC will not stand idly by while consumers are deceived by misleading marketing materials and insufficient disclosure."

AT&T stopped offering new unlimited plans to new customers in 2009, but it has let customers who had them before that date keep them.