After years of building a solid foundation, 2016 could be a breakout year for First Solar, Inc.

First Solar (NASDAQ: FSLR) has been one of a small number of solar companies to outperform the market in 2015. The company has improved its technology and leveraged a strong balance sheet and financial flexibility to provide consistent returns on solar projects at a time when most companies haven't been so consistent.

But 2016 could be a record year for First Solar as industry growth and First Solar's competitive position converge to create a solid position for investors.

The solar industry is booming
In many ways, First Solar's growth is helped by the growing solar industry, and 2016 will be a massive growth year. According to GTM Research, U.S. solar installations are expected to grow from 6.2 GW in 2014 to over 7.1 GW in 2015 -- to an incredible 15 GW in 2016. And now with the recent investment tax credit extension the industry is now expected to grow to 20 GW by 2020.

Solar installment is experiencing a rush because of falling costs and falling costs lead to greater demand. That dynamic should lead to strong demand for First Solar's modules and solar projects both in 2016 and beyond.

First Solar's growing production and efficiency
When management recently announced 2016 guidance, it showed the improvements that are expected next year. Module efficiency is going to improve from 15.5% to 16.2%, and module production will grow 20% to 3.0 GW. 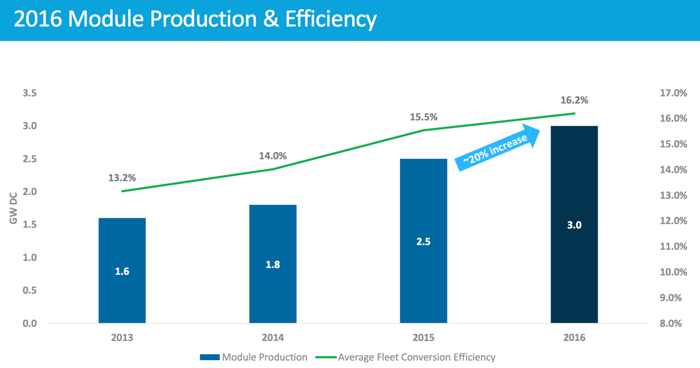 I would also expect First Solar to be a big winner of energy contracts throughout the year, taking advantage of many weak competitors. With a strong balance sheet, improving efficiency, and a track record of predictable production to sell to utilities, I think First Solar will be a big winner as a preferred energy partner in 2016.

More upside could be in store
The biggest boost First Solar could have gotten was an ITC extension, which appears to be on the way in a recent budget compromise. But the company could also get a boost from emerging markets that are attracted to the low cost of solar energy.

Countries like Saudi Arabia, the UAE, and parts of Africa would lend themselves to First Solar's technology, and if they aggressively install solar, the company would be an obvious winner.

The risk of competition is always present
While market conditions are looking up and technology is improving there are also risks facing First Solar. Conventional silicon solar panel manufacturers are increasing efficiency to levels at or above what First Solar is making today. If they can match First Solar's cost they could take market share.

There's also a risk that financing markets dry up, like they have for yieldcos in 2015. First Solar has moved away from being a module supplier to using its own modules for projects it develops itself. This has led to higher margins long-term, but if financing markets freeze up First Solar could be in a rough position, being forced to build billions in assets on its balance sheet.

I think these risks are low in 2016, but they're worth being aware of.

2016 could be a big year
First Solar has long been one of the best companies in the solar industry, but the last five years have seen a lot of upheaval as silicon panel prices dropped and many companies vertically integrated. But now that the industry is maturing, clear leaders like First Solar are starting to emerge. The company is profitable, has a great balance sheet, and has improving technology that make it more competitive than it's been in years. That's a great position for 2016, which should be a record year for the solar industry and First Solar.

Travis Hoium owns shares of First Solar. The Motley Fool has no position in any of the stocks mentioned. We Fools may not all hold the same opinions, but we all believe that considering a diverse range of insights makes us better investors. The Motley Fool has a disclosure policy.