Companies giving the gift of higher payouts last week included a top pharmacy chain, a REIT, and an aerospace giant.

Now this is the way to head into the holidays. In the week before Christmas, several big-name companies decided to play Santa by raising their payouts. As has been the case through most of these final weeks of 2015, the list of dividend lifters was large and busy.

Several of those increases were comfortably in the double digits in terms of percentage. All in all, it's been a fine holiday season for holders of dividend stocks. Here are the details on three of last week's raisers.

Realty Income
Popular real estate investment trust Realty Income (O -0.40%) advertises itself as "the monthly dividend company," and every now and then, it's the monthly dividend raise company. This is one of those times; it's added half a cent to its payout, which now stands at just over $0.19 per share. The raise is its 83rd since the REIT went public in 1994; across that span of time, it has made nearly 550 dividend payments.

There's plenty of money in the coffers for those payouts. Realty Income has been at this game a long time, and it's adept at growing its funds from operations (a key profitability metric for REITs). In its most recent quarter, the company's adjusted FFO leaped by an impressive 16% on a year-over-year basis to $166 million. 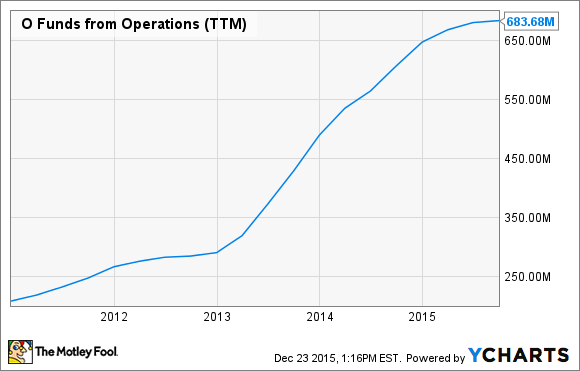 What helps greatly is that the buildings in Realty Income's portfolio are stuffed nearly to capacity, with occupancy over 98%. That's particularly impressive given that the company holds nearly 4,500 properties throughout the U.S. and Puerto Rico. It also operates in a good segment; a thriving economy creates strong demand for retail space.

Realty Income is a sturdy, solid, reliable old pro. This is a company that knows its business cold, and it will almost certainly continue to do well. I think this is far from its last dividend raise.

The REIT's new distribution will be paid on Jan. 15 to shareholders of record as of Jan. 4.

CVS Health
Big pharmacy chain operator CVS Health (CVS -0.48%) is closing its 2015 in style. Just after sewing up a sweet deal that will see it substantially raise its footprint, the company enacted a hefty raise in its quarterly dividend. Last week, it declared a fresh payout of $0.425 per share, 27% higher than its predecessor.

That's par for the course -- CVS Health likes to boost its dividend dramatically every year around now. This year, the timing is interesting, as it coincides with the news that it closed said deal -- to buy Target's in-store pharmacy and clinic business for $1.9 billion. At a stroke, it gives the company nearly 1,700 new locations inside Target stores.

Although that price isn't cheap, CVS Health's fundamentals are in good shape, and they look to improve quite a bit. Concurrent with the dividend increase announcement, it moved the midpoint of its fiscal 2016 guidance higher. It now expects to post a per-share net profit of $5.73 to $5.88, which would represent year-over-year growth of 11% to 14%...and that's taking the Target buy into account. 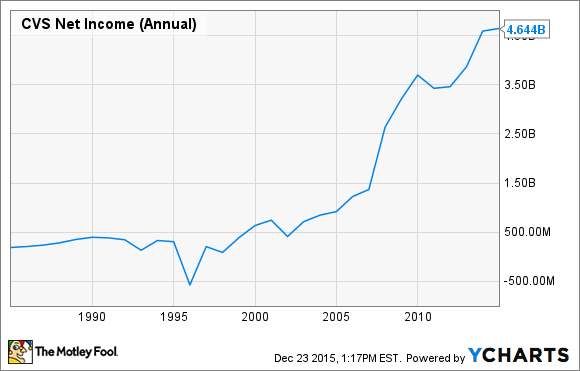 Times are good for the company, and it's thriving. In my opinion, it'll almost certainly be able to at least maintain that new dividend going forward.

CVS Health's upcoming distribution will be paid next Feb. 2 to stockholders of record as of Jan. 22.

Boeing
Boeing (BA -1.59%) is wrapping up its year with a generous dividend increase, by almost 20% to $1.09 per share. That sounds high, but like CVS Health, it's developed a habit of adding plenty to the payout when raise time comes around. Last year, it did so to the tune of almost 25%, and in 2013, rocketed it more than 50% higher. 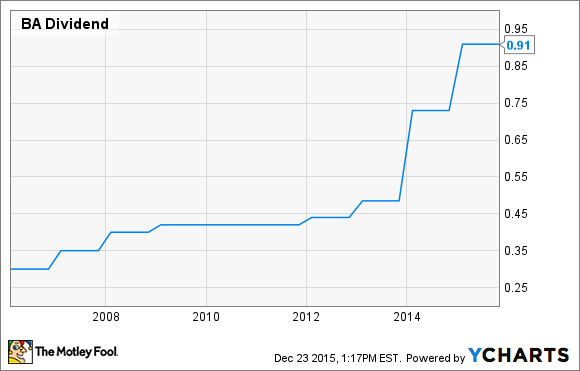 The company's got the dosh for those rapidly rising distributions. In its most recently reported quarter, net income grew 25% higher on a year-over-year basis (to $1.7 billion, or $2.47 per share), on the back of revenue that increased by 9% to just under $26 billion.

Some government officials have criticized defense majors like Boeing for not shoveling more of their earnings into research and development. But the company is clearly determined to keep putting cash into dividends and buybacks. Concurrent to its dividend announcement, Boeing said it authorized $14 billion in share repurchases, replacing the preceding $12 billion program.

The company's got the financial muscle for these activities; both operating and free cash flow have been rising notably, with the latter increasing by nearly 10% last fiscal year to over $6.6 billion. This was more than three times the amount paid in total dividends. Boeing's in good shape financially, and its dividend should be safe for now.

Said payout is to be distributed next March 4 to stockholders of record as of Feb. 12.

Eric Volkman has no position in any stocks mentioned. The Motley Fool recommends CVS Health. We Fools may not all hold the same opinions, but we all believe that considering a diverse range of insights makes us better investors. The Motley Fool has a disclosure policy.