Please ensure Javascript is enabled for purposes of website accessibility
Log In Help Join The Motley Fool
Free Article Join Over 1 Million Premium Members And Get More In-Depth Stock Guidance and Research
By Ryan Downie - May 3, 2021 at 8:10PM

Is the risk worth the reward for Boeing stock, or should investors go with a Dow Jones index ETF?

Pandemic recovery optimism is creating buzz that Boeing (BA -0.67%) stock is ready to pop. Airlines are expecting higher traffic, and a return to normal cash flows in that industry will translate to fleet upgrades. However, Boeing's business comes with some inherent risks. Investors need to question whether the stock's potential upside is better than just buying an index fund.

Let's see how Boeing stacks up against the Dow Jones Industrial Average (^DJI 0.08%) as an investment.

Boeing comes with some risks

Boeing investors will tell you that it can be a bumpy ride. The company has endured self-inflicted issues, such as the 737 MAX failures that resulted in worldwide groundings of the model last year. That problem reemerged earlier this month, and it threatens the Boeing brand -- airlines don't want their craft on the ground, not making money.

We saw last year just how dire financial consequences can be for Boeing when there are problems beyond their control. The pandemic caused uncertainty in the airline industry and threatened the financial health of several major carriers, who faced a nearly complete and indefinite cessation of traffic. As a result, Boeing delivered only 157 aircraft in 2020. That was down from 380 in 2019, which was itself a major decline from the 806 deliveries in 2018, due to the 737 MAX grounding. 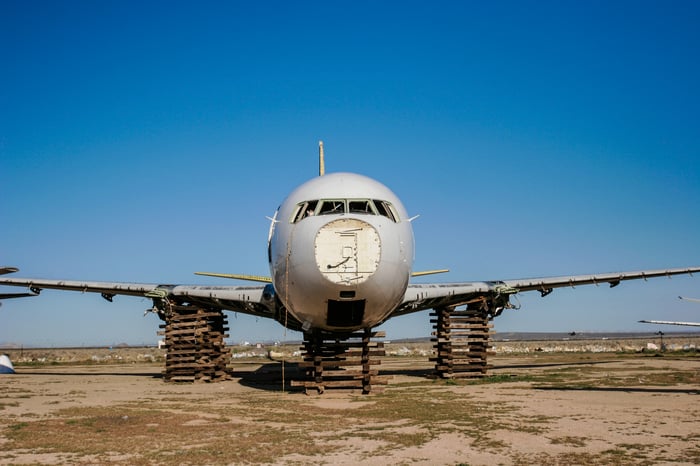 Boeing operates a cyclical business that is dependent on the financial condition of its customers downstream. At full capacity, commercial jet deliveries produce the majority of the aerospace leader's revenue, so Boeing needs a full backlog of orders that are being completed. With a relatively small number of customers and extremely low unit sales, it doesn't take much to drastically impact the top line.

These risks are all amplified by Boeing's debt-heavy capital structure. Debt can be a great financing option to minimize the cost of capital, but the past year has illustrated once again how crisis conditions create additional risk for companies with high leverage. Boeing paid $680 million in interest and made debt principal repayments of $9.8 billion in the first quarter. Even when business was booming in 2017 and 2018, quarterly free cash flow maxed out around $4 billion.

The stock dropped more than 50% when the market crashed in Q1 2020, and it's still more than 30% below the pre-pandemic peak. Fears of bankruptcy hit the market, with uncertainty and leverage forming a troublesome combo for investors. To Boeing's credit, it has managed to stay afloat without a massive government bailout (though skeptics believe that the Fed inadvertently saved Boeing by stimulating private bond purchasing).

Still, the fact remains: This was not a business that was prepared to endure successive crises without breaking a sweat. As it stands, the company had cash outflows of $20 billion last year and burned an additional $3.7 billion in the first quarter as order cancellations in March weighed on outlook. Even with unprecedented optimism swirling around economic growth in the United States, Boeing isn't necessarily feeling the love quite yet.

The Dow is a unique stock index

The Dow Jones is a bit wacky as far as major stock indexes go. First, it only contains 30 stocks, which means that it is much more exposed to individual holdings than the S&P 500 or the Nasdaq Composite. The Dow also has a novel approach to weighting. Market cap weighting is the most popular composition method. Some indexes even pursue equal weighting so that smaller stocks can exert the same influence on index returns as larger stocks.

The Dow zigs where others zag, and its index weighting is based on share prices for each constituent stock. That means that stock splits can drastically alter the composition without changing the value of underlying companies. It also means that smaller companies can have a larger influence on index returns, simply because their price per share is high.

As it stands, Boeing currently makes up 4.7% of the Dow. Industrials are the second-largest sector in the index right now, with 17.8% of the total allocation. Tech is larger by 3 percentage points. Buying an index fund that tracks the Dow, such as the SPDR Dow Jones Industrial Average ETF Trust (DIA 0.15%), provides diversified exposure, but not nearly to the same degree as other popular indexes.

Verdict on Boeing and the Dow Jones

As is usually the case, indexing dilutes risk and also reduces upside. If Boeing is able to spring back to sustainable profitability and enjoy a long period of stable orders, then it will almost certainly outpace the Dow over the long term.

That said, there appears to be a risk-reward imbalance between the two. Boeing is in a tough spot and will inevitably face more major issues in the future when cyclicality hits hard. Oddly, the aerospace stock isn't priced at a noteworthy discount to the other Dow constituents. Boeing's shares trade at a 44.3 forward P/E ratio, based on the most aggressive earnings forecasts for 2022. The Dow Jones has a 33.6 P/E ratio. Boeing shareholders will also experience more volatility, and that stock doesn't deliver the 1% distribution yield received by SPDR Dow Jones ETF shareholders. In short, there's an easy and efficient way to own all 30 Dow stocks, and it's cheaper relative to earnings.

The very same forces that would propel Boeing forward will also be catalysts for the rest of the Dow Jones stocks. For most investors, it's cheaper and less risky just to buy the index-tracking ETF.