Please ensure Javascript is enabled for purposes of website accessibility
Log In Help Join The Motley Fool
Free Article Join Over 1 Million Premium Members And Get More In-Depth Stock Guidance and Research
By James Brumley - Jul 17, 2021 at 8:30AM

It's a common question for investors: Does it make more sense to hedge your bet and buy into a bundle of stocks, or would it be wiser to take a shot an individual stock?

For most investors most of the time, a broad-based index fund like the SPDR Dow Jones Industrial Average ETF (DIA 1.24%) is the better choice. It takes time to manage a portfolio of individual stocks, and even when there's time, the odds of beating the broad market are still rather slim.

There are scenarios, however, when an individual stock is the better buy... even when that stock is beleaguered aircraft company Boeing (BA 1.26%).

This is one of those times. 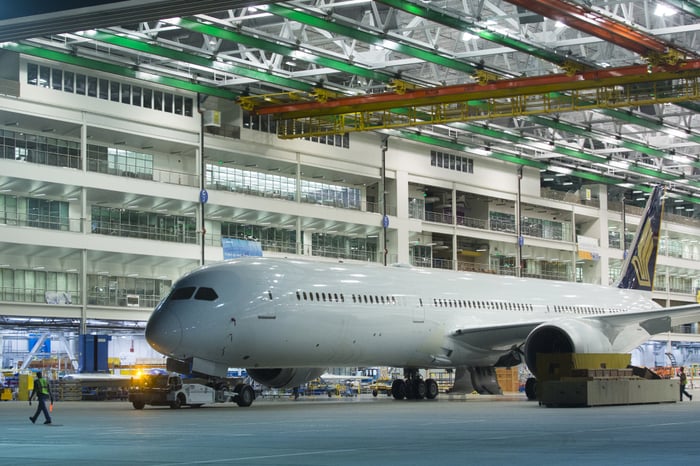 Why Boeing is the better buy

Well before the design flaws of its 737 MAX passenger jet were put in the rearview mirror, the COVID-19 pandemic took hold, crimping air travel and subsequently crimping airline demand for new planes. Travel is easing back toward pre-pandemic levels, though it's slow going. In the meantime, although the 737 MAX is recleared for flight, a manufacturing flaw of the 787 Dreamliners has been uncovered. Share prices are down nearly 7% since that news broke earlier this week, suggesting investors are thinking "not again." The weakness snapped an already tenuous rebound effort the stock has been working on since last March.

The fact is, though, the Federal Aviation Administration's concern is actually quite modest. The agency knows 787 Dreamliners that are already in use may well suffer the manufacturing misstep in question, but -- for the time being anyway -- is considering letting these planes remain unchecked and unaltered. The only Dreamliners that will require repairs are the ones Boeing has yet to deliver to customers.

It's also worth noting that as of the end of last month Boeing is sitting on more than 5,000 orders for planes to be delivered over the course of the next few years. To put that in perspective, in 2018 (before the pandemic as well as before the 737 MAX's fatal flaws were found) the company delivered a total of 806 aircraft.

The point being, Boeing is going to be fine despite the near-term turbulence. Recent weakness from the stock is an entry opportunity for long-term investors. 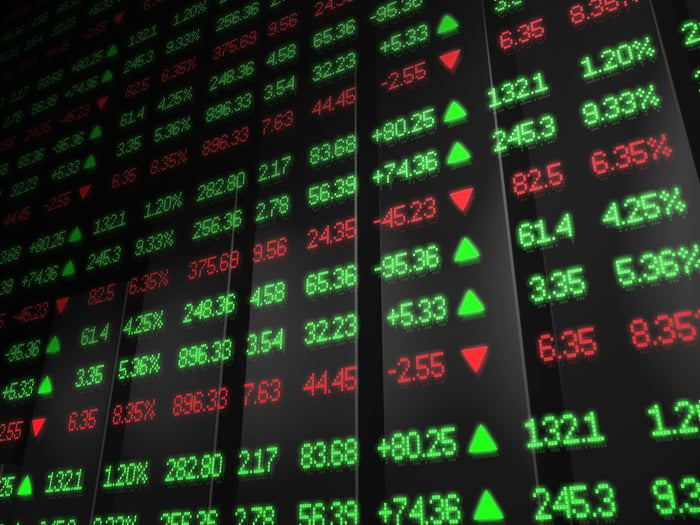 Why the Dow Jones Industrial Average is not

But why step into a problem-riddled laggard like Boeing when the Dow Jones Industrial Average (^DJI 1.27%) appears so unstoppable? It's up 88% since last March's low, after all, yet just hit yet another record high!

As investors are often reminded, past performance is no guarantee of future results, and there's certainly plenty of reason to suspect the broad market (including the Dow) is just about out of steam.

One of these red flags is being waved by consulting firm Deloitte. A second-quarter survey of many of the nation's top CFOs indicates that 86% of them feel equities (i.e. stocks) are overvalued at this time. That's up modestly from the first quarter's figure of 83%, although for perspective, this number was 63% as of the pre-pandemic third quarter of 2019.

But are low interest rates and nascent inflation skewing acceptable valuations higher? Maybe, though even taking this into account valuations are still oddly rich. The Case-Shiller cyclically adjusted price-to-earnings (CAPE) ratio -- which factors in the impact of inflation -- currently says the S&P 500's inflation-adjusted P/E ratio stands at a mind-boggling 38. The only time it's ever been higher was in early 2000, when it peaked at 44 right before the dot-com bubble was popped. 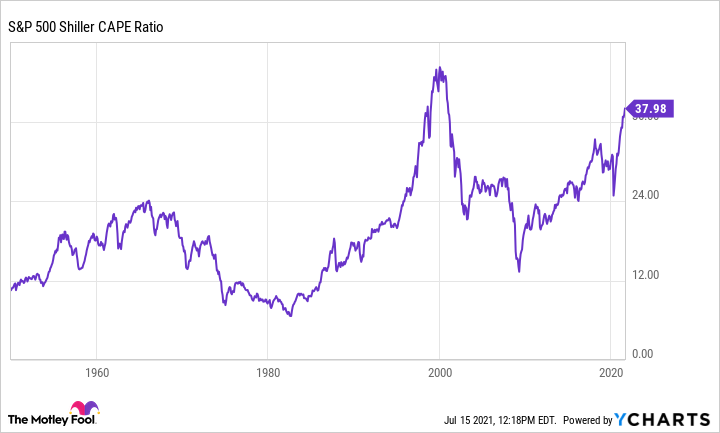 Even the Oracle of Omaha suspects valuations are far too rich at this time. The so-called Warren Buffett indicator, which compares the entire U.S. stock market's aggregate market cap to the nation's annualized GDP, sits at roughly 45% above its recent norm, and around twice its longer-term norm.

Sure, we're in an unusual environment, where the economy wasn't tripped up by economic factors but instead was rattled by pandemic-related shutdowns. It's recovering quickly, faster than interest rates can safely climb to curb inflation. Nevertheless, a slew of different valuation measures all agree that stocks are far too frothy.

Flexibility is the key

Bear in mind that steep valuations alone don't necessarily spark market-wide sell-offs. They typically start with a catalyst, and thus far, investors have shrugged off any headlines that might have put a pullback into motion.

By that same token, simply because Boeing's future is compelling doesn't mean investors can easily forget the past. Time heals all wounds, but headlines about the 787 Dreamliner's manufacturing problems all too easily pulled the rug out from underneath Boeing's stock. There's no telling when the aircraft maker's stock will find clear skies.

Investing is largely about managing risk and reward, though. Boeing's apt to work past its 737 MAX gaffe sooner than most might expect, as the travel market continues its recovery. Likewise, while it's sidestepped all of its prospective stumbling blocks thus far, it only takes one slip to jump-start a broad market correction when stocks are collectively too expensive. If you've narrowed your choices down to Boeing or something more broad-based like the Dow, this is a time where the lower-risk, higher-reward option is the beaten-down stock and not a currently inflated index.