AstraZeneca is taking dead aim at AbbVie's heir apparent to Humira. Should investors be worried?

AstraZeneca (AZN 0.46%) may have just struck a serious blow to AbbVie's (ABBV 0.25%) stated goal of producing industry-leading growth heading into 2020 and beyond. Specifically, the British drugmaker reportedly bought 55% of privately held Acerta Pharma for $4 billion, giving the company access to the experimental blood cancer drug acalabrutinib.

If Astra chooses to do so later down the line, the drugmaker also has the option of buying the remaining portion of Acerta for another $3 billion, according to the press release.

Why should AbbVie's shareholders care about Astra's deal with Acerta?
AbbVie recently paid a whopping $21 billion to acquire Pharmacylics for its half of the highly coveted blood-cancer-treatment Imbruvica; Johnson & Johnson owns the other half of the drug's commercial rights.

The key issue to understand is that AbbVie was reportedly willing to pay such an enormous sum because the company's management thinks Imbruvica can generate upwards of $12 billion in peak sales, given that it has the potential to gain multiple regulatory approvals across a diversity of blood disorders and several lines of therapy. Now that Astra has thrown its Big Pharma weight behind acalabrutinib, these peak sales projections for Imbruvica may be unrealistic.

Another important issue to keep in mind, is the forthcoming patent expiration for AbbVie's flagship anti-inflammatory drug, Humira. As several competitors are developing a generic form of Humira known as a "biosimilar," AbbVie's most important revenue driver could face generic competition as soon as 2017. Therefore, Imbruvica needs to perform well in order to soften the blow in case Humira's sales do indeed hit the skids once it goes off patent.

What are the ramifications of this deal for AbbVie moving forward?
Not long ago, AbbVie rolled out extremely positive long-term guidance, hoping to reignite investors' interest in its struggling stock. According to data provided by S&P Capital IQ, AbbVie's shares have now fallen by nearly 14% this year, despite the company maintaining one of the highest dividend payouts in the industry and consistently posting double-digit increases in quarterly revenue. 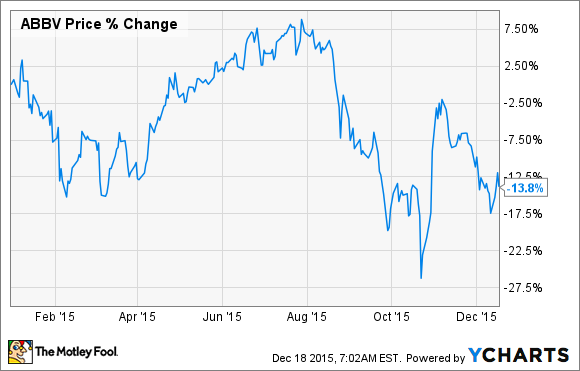 Based on this guidance, however, AbbVie seems confident that its plan to protect Humira from biosimilars will work out, with the company projecting $18 billion in sales for the drug by 2020. Imbruvica, on the other hand, is expected to generate more than $5 billion in revenue per year for the drugmaker within the next four years, putting it on track to become Humira's heir apparent.

But therein lies the problem. Although acalabrutinib is well behind Imbruvica in terms of its clinical development, Astra believes the drug can become a best-in-class treatment for a variety of blood disorders. In short, acalabrutinib may prove to be more effective and come with fewer side effects than Imbruvica, making it a serious threat to AbbVie's long-term guidance and plans to significantly diversify its revenue base beyond Humira.

Tying it all together
AbbVie went for broke when it paid $21 billion for Pharmacyclics. The sheer size of this deal substantially narrowed the company's ability to engage in further M&A activity in hopes of finding its next flagship product. And now with Astra pushing deeper into hematology, this costly buyout is starting to look like a major misstep by AbbVie. As such, I'm personally content to watch this top biopharma from the sidelines for now.

George Budwell has no position in any stocks mentioned. The Motley Fool recommends Johnson & Johnson. We Fools may not all hold the same opinions, but we all believe that considering a diverse range of insights makes us better investors. The Motley Fool has a disclosure policy.