All signs point to "yes."

Over the past several years, wireless chip and intellectual property giant Qualcomm (QCOM -0.61%) has become much more shareholder friendly. It has committed to returning at least 75% of its annual free cash flow through both share repurchases and dividends to investors, with the company aiming to grow dividends "faster than earnings," according to Reuters.

Even though the company had a rocky fiscal year 2015, and even though fiscal 2016 still looks as though it will be a year of transition, I believe that the company will raise its dividend in 2016, probably at its February analyst meeting.

Qualcomm has plenty of room to boost the dividend
When trying to figure out whether a company has room to boost its dividend -- and, if so, by how much -- the first thing I look at is the company's free cash flow per share over the past 12 months: 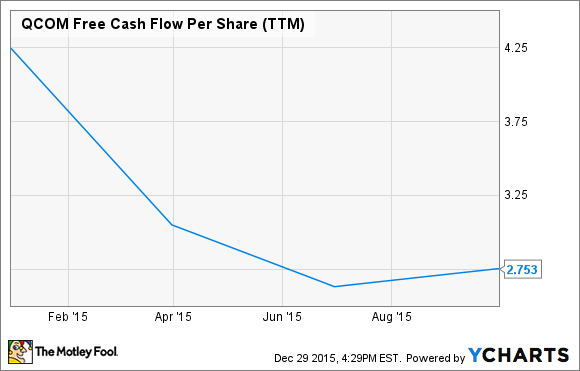 Free cash flow is generally what funds dividends and other capital returns, so what I do is compare the amount of free cash flow per share that a company generates with the amount it currently pays per share in dividends. If the former is significantly greater than the latter, then it's probably reasonable to assume that there is room for the company to boost its dividend.

Qualcomm's current dividend sits at $0.48 per share per quarter, or $1.92 per share annualized. At first glance, it would seem that Qualcomm has room to boost its dividend, but not all that much more room. However, it's worth pointing out that Qualcomm's free cash flow per share was artificially depressed by a large "long-term capacity prepayment" of about $950 million made during the company's second fiscal quarter, as well as a $975 million one-time NDRC fine.

I believe that Qualcomm's longer-term free cash flow generation capability is solidly north of $4 per share, roughly in line with expected earnings per share on a non-GAAP basis.

In my view, Qualcomm certainly has the capacity to grow its dividend payouts from here.

Indeed, a dividend boost not only makes the stock more attractive to income-oriented investors (the current dividend yield is 3.77%, which is quite respectable), but it also serves as a "vote of confidence" from both management and the board of directors in the company's future.

In my view, then, Qualcomm stockholders should fully expect a dividend boost in 2016.

Taking the longer-term view
As a Qualcomm shareholder, I'm not worried about whether the company will be able to deliver a dividend increase in 2016. What I'm more interested in is seeing the company return to revenue and earnings-per-share growth.

An increased dividend is nice, but what long-term investors really like to see is a business that is on a path of sustainable long-term growth. Indeed, when a business is on such a growth path, dividend increases and/or more aggressive share repurchases are practically assumed.