Coming off difficult years, we look at exactly what went wrong with 3D Systems, Stratasys, Micron Technology, and Yelp in 2015.

After soaring in the wake of the Great Recession, the stock market largely hit the pause button in 2015, barring some unforeseen event in the waning hours of 2015.

All told, the tech-weighted Nasdaq Composite has risen roughly 7.5% as of this writing. However, as is always the case in investing, movements in the broad indices overlook much of the drama that happened within their individual components.

As we continue to round out our year-end coverage, let's quickly review which stocks receive the dubious moniker of the worst tech stocks of 2015 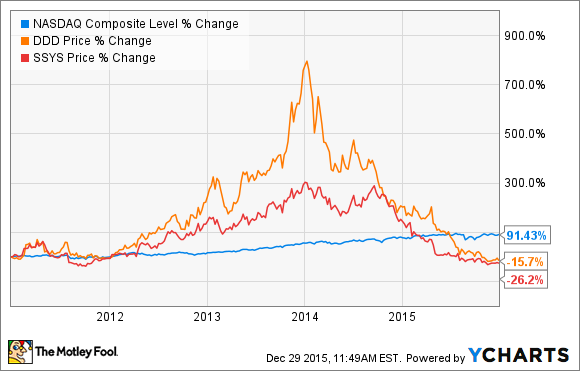 After rallying to nearly unjustified heights from 2012 to 2014, 3D printing stocks like 3D Systems and Stratasys faced investors' ire as the big-ticket potential 3D printing presented failed to arrive as quickly as shareholders wished. For both firms, things really couldn't have gone much worse.

As 3D printing reached saturation among early adopters, revenue declined at both 3D Systems and Stratasys. To make matters worse, both companies have increased their respective cost bases to support their long-term growth. As you can see, investors weren't thrilled.

Though perhaps less ebullient than the heady forecasts from several years ago, the market for 3D printing does enjoy some undeniable long-term potential. Stratasys envisions its long-term revenue opportunity in the range of $10 billion to $15 billion. So while the market has clearly hit the reset button on what many believed would be one of tech's most important generational trends, are shares of 3D Systems and Stratasys finally back in line with their current business realities? The answer to this question should prove the defining issue for shares of 3D System and Stratasys as we head into 2016. 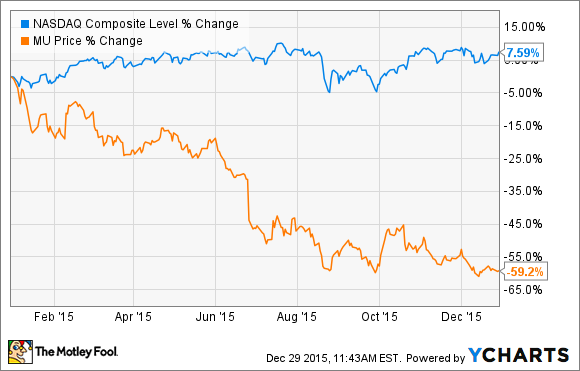 Faced with intense competition from a number of well-capitalized competitors, the general trend of both DRAM and NAND flash storage, two of the most common memory types, resumed its march downward after pausing for artificial reasons last year.

The surprise 2013-14 pricing strength helped fuel a rally in Micron shares in both years. However, with memory chip inventories normalizing and competition again pressuring DRAM and NAND prices, Micron's financial performance predictably mirrored the industrywide pricing trends. In hindsight, this reversal of fortune seemed obvious to weigh on Micron's financial performance. In its Q4 earnings release, Micron saw net income implode from $1.1 billion in last year's Q4 to a far more meager $471 million. And as we head into 2016, analysts see only moderate growth ahead for Micron, making a clear path to recovery from this year somewhat hard to envision. 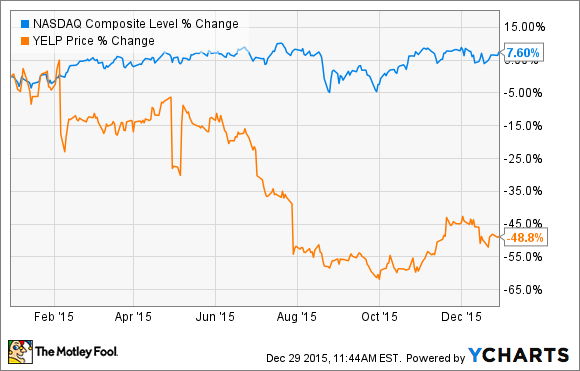 Scaling its ad-sales machine in recent years has driven brisk revenue growth at Yelp; the company saw sales increase 40% in its most recent quarter. However, Yelp has been unable to translate that growth into bottom-line profits, much to investors' chagrin. Yelp badly missed profit estimates in its Q1 and Q2 earnings reports, which predictably triggered steep declines in its highly volatile shares.

Further compounding the recent sense of pessimism clouding Yelp shares, larger Internet rivals like Facebook and Alphabet both appear intent on creating or expanding their own local review businesses. According to recent reports, the former currently has its own Professional Services search engine in beta testing. Google has had a similar product layered onto its stunted Google + social network. And while Yelp remains the clear leader in the local review space, an advantage that might be tougher to break than many realize, the scale and resources that the two giants can deploy should have Yelp share owners understandably concerned. If Yelp can fend of this well-heeled competition, 2016 could prove an exciting year for investors willing to bear that admittedly sizable risk today.

Suzanne Frey, an executive at Alphabet, is a member of The Motley Fool's board of directors. Andrew Tonner has no position in any stocks mentioned. The Motley Fool owns shares of and recommends GOOG, GOOGL, and FB. The Motley Fool recommends DDD, SSYS, and YELP. We Fools may not all hold the same opinions, but we all believe that considering a diverse range of insights makes us better investors. The Motley Fool has a disclosure policy.