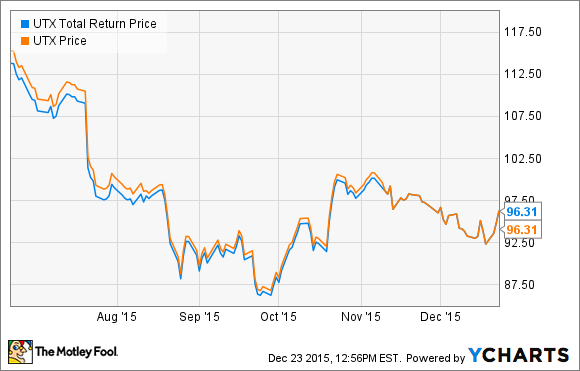 In June, United Technologies Corporation (NYSE:RTX) made headlines: In a long-anticipated sale, it would offload its Sikorsky helicopters unit to Lockheed Martin -- and collect $9 billion in payment.

Some people liked the deal. Others didn't. (Personally, I did not. While United Tech got a good price for Sikorsky, it gave up tens of billions of dollars' worth of future revenues when it let Sikorsky go. And the deal's already working out very well indeed for Lockheed Martin, by the way).

Nevertheless, with Sikorsky gone but United Technologies stock still sinking, the question that's rising in investors' minds today is this: Which United Tech business will be next to go on the auction block? What is United Technologies' worst business segment -- and will they sell it, too?

To find the answer to that question, I turned to the data gurus at S&P Capital IQ, and pulled up the revenue and operating profit numbers for United Tech's four big business segments post-Sikorsky. I compared each one to the others, to see which business does the best job of extracting profitable pennies from revenue dollars. Here's what I found:

Worse, as the company's second biggest business by revenues, Pratt & Whitney's weak profit margins have an outsize effect on the company's profit margin as a whole -- sapping the strength of businesses such as Otis (the company's most profitable, and arguably its best business today) and Climate, Controls & Security (United Tech's biggest revenue generator, and the one growing profitability fastest).

Simply put, Pratt & Whitney is a drag on the business as a whole. And the last time we saw a business segment (Sikorsky) cast in that role -- United Tech sold it. Does this same fate now await Pratt & Whitney?

It seems to me that CEO Gregory Hayes has a pronounced preference for products used to outfit big buildings. That means elevators at Otis, and sprinkler systems, alarms, and surveillance equipment at Climate, Controls & Security. Being a former "numbers guy" -- Hayes used to be United Tech's CFO prior to Louis Chenevert's departure last year -- that's only natural. Buildings-related businesses are producing the company's best profits and greatest revenues, respectively, so why not focus on what you're best at?

That said, there are serious synergies at work when United Tech's two "also-ran" businesses, Pratt & Whitney and Aerospace Systems, stick together. Both of these businesses focus on airplanes, and one imagines they offer multiple opportunities for cross-selling products among customers. That being the case, selling Pratt & Whitney but keeping Aerospace Systems wouldn't seem to make a lot of sense.

At least, that's my read on United Technologies' worst business segment of 2015, and what's in store for it in the future. What's yours?

Tell us about it below.