Will Microsoft (NASDAQ:MSFT) raise its dividend in 2016?

Is the Pope Catholic? That's how obvious I think the answer is.

But the key details for investors don't end there, so let's dive deeper into Microsoft's dividend outlook and how it intertwines with the software giant's investment profile.

A budding dividend dynamo
Microsoft can't yet be considered a "Dividend Aristocrat," a moniker reserved for S&P 500 companies that have raised their payouts for 25 consecutive years. However, Microsoft is without question one of most formidable dividend payers in all of technology. Here's how its dividend history has played out since the payout's inception in 2003, excluding the lone $3.00 special dividend it distributed in November 2003. 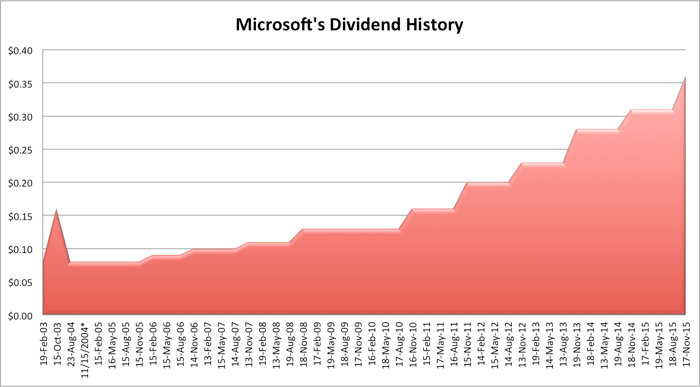 Investors should note a few key points. First, Microsoft appears committed to continuing to increase its cash distributions. The company's enviable dividend growth track record includes only two years in which it failed to promote its payouts. Its FY 2005 saw no increases, but that was early in its dividend history, and it closely followed the aforementioned $3.00 special dividend. The second pause happened out of an abundance of caution in the throes of the Great Recession in 2009, a forgivable moment of restraint on management's part. All told, excluding its '03 special dividend, Microsoft has increased its dividend at an annual rate of roughly 12% annually.

Especially with Microsoft's cash and short-term investments balance likely to surpass $100 billion in its upcoming quarterly report, the stage is set for an almost assured increase in its dividend in 2016. That's fantastic news for dividend-conscious investors. However, the outlook for Microsoft as a company over the long term isn't as clear.

Long-term strategy still carries risks
Microsoft has made progress under CEO Satya Nadella, but in terms of its broader investment outlook, the company still must overcome some hurdles in to remain relevant in our increasingly mobile and cloud-centric world.

On the cloud side of the business, Microsoft has blossomed into an industry power second to only Amazon.com. Though ex-CEO Steve Ballmer has slammed Microsoft's cloud disclosure, the company appears well positioned to profit from one of this generation's most central computing themes, even if we don't have great insight into the current margin structure of this evolving reporting segment.

As for the other half of the mobile-cloud continuum, Microsoft's mobile strategy, while improved, remains unlikely to achieve meaningful market-share gains. Playing to enduring PC strength, Microsoft made a decision to create a single, unified experience from desktop to mobile on Windows 10, and it was a good move that should help it on the margin. However, given the structural obstacles working against Microsoft's ability to attract critical third-party app developers, there's no reason to think the company can become relevant in mobile against the Apple-Alphabet mobile-software duopoly.

So while you can pretty much take it to the bank that Microsoft will increase its dividend in 2016, investors will need to reconcile its prodigious payouts with some of the other issues facing its core business.