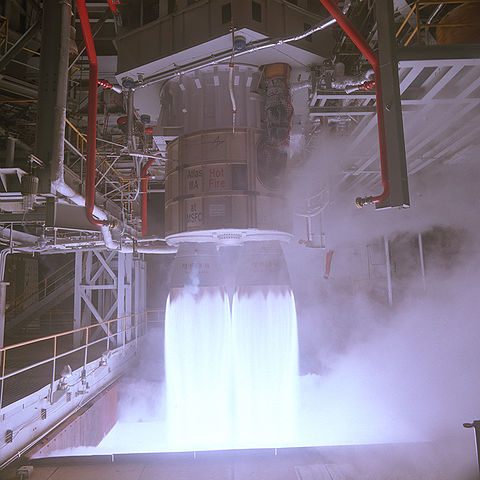 RUSSIA'S RD-180 ROCKET ENGINE IS ONE POWERFUL PIECE OF MACHINERY -- IF YOU CAN GET YOUR HANDS ON ONE. IMAGE SOURCE: WIKIMEDIA COMMONS.

Did I say that ULA is out of the space race? Well, let me check myself, before Congress wrecks my prediction.

Congress, you see, recently banned use of Russian RD-180 rocket engines to send U.S. military satellites into space. Problem is, United Launch Alliance -- ULA, the satellite-launching joint venture between Boeing (NYSE:BA) and Lockheed Martin (NYSE:LMT) -- needs these Russian engines to power its Atlas V launch vehicle. And when ULA asked the Pentagon to let them use these engines on a recent Air Force contract, the Pentagon said no.

Result: No rocket engines, no rockets. No rockets -- no rocket launches.

Stymied by Congress, ULA announced in October that it will not bid on a new contract to send U.S. Air Force GPS satellites into orbit. This left the Air Force with only one bidder on its contracts, and effectively gave ULA rival SpaceX a monopoly on the business -- just months after the Air Force had certified SpaceX to begin bidding on such space launches.

Unintended consequences
This was not what Congress had hoped would happen. And so -- months too late to ensure competition on the GPS contract -- Congress has finally moved to fix the problem. Congress inserted a provision onto its recently passed $1.1 trillion government spending bill that permits using the RD-180 on U.S. government space launches "regardless of the country of origin ... in order to ensure robust competition and continued assured access to space."

Meanwhile, back at the ranch...
Orbital ATK seems fine with continuing to stick Russian engines in its American rockets. ULA, on the other hand, remains committed to kicking the habit. ULA says it's proceeding with plans to develop and buy a new class of engines from American producer Blue Origin, or perhaps Aerojet Rocketdyne (NYSE:AJRD). And as for its decision to buy a batch of Russian rocket engines -- that's just a gap-bridging measure that will permit it to keep bidding on contracts, and shooting rockets into space, "until a new American-made engine can be developed and certified," according to ULA's press release.

How long will it take?
When will that "American-made engine" arrive? ULA was vague in its latest announcement. While the company promised that the latest batch of RD-180 engines "will allow ULA to provide the reliable, affordable launch services our civil and commercial customers depend on from us while the new, American engine is being developed," timeline-wise, the company only said that development of the new engine will take "years to complete."

Previously, however, ULA has expressed hopes to get a new American-made engine "qualified" by 2017, and to run its first test flight by 2019. That's if Blue Origin's BE-4 engine fits the bill. If it doesn't, ULA will need to go to its fallback option, Aerojet Rocketdyne's AR1 engine, which won't be ready before 2020.

What does this mean for investors?
The good news for investors in Boeing and Lockheed Martin is that, whether it takes four years or five years for ULA to fire up an American-made engine, the company can continue doing business as usual while it waits. With plenty of RD-180s in stock, ULA can once again challenge SpaceX for lucrative government satellite launches -- expected to produce $70 billion in revenue for the winners over the next 15 years.

Who wins the work will boil down to a battle between price and quality. On one hand, SpaceX will promise to send satellites into orbit for just a fraction of what ULA has been charging the U.S. taxpayer. On the other hand, ULA can boast a record of launching nearly 100 rockets in a row without a single mishap, versus SpaceX, which... can't.

Which factor weighs heaviest in the U.S. Air Force's evaluation process should determine who gets the loot.

And what does this mean for the space industry?
Longer term, ULA's one-time buy of a batch of RD-180s probably won't change the trends in the U.S. space industry. Boeing and Lockheed have committed to eventually switching to U.S. suppliers for their rocket engines, and that's not going to change.

This is clearly bad news for Energomash, and for Russia's space industry in general (Energomash is majority-owned by the Russian state). ULA's RD-180 purchase will probably be its last, as the company says 20 engines will be more than enough to fulfill its Atlas V launch commitments through 2020  Energomash can still count on $1 billion in foreign revenues from Orbital ATK in payment for the 60 RD-181 engines it has on order, of course. But ultimately, this source of capital -- crucial to supporting Russia's space program -- will dry up as well, because Orbital is also developing new engines, in house, for use by the U.S. Air Force.

Long story short, while Energomash can still count Orbital ATK as a customer, Orbital will probably kick the Russian habit eventually, too. And once Orbital joins Boeing and Lockheed in choosing to "buy American," Russia will be left out in the cold.

Two Russian RD-181 rocket engines -- probably among the last the U.S. will ever buy -- being attached to an Orbital ATK Antares rocket. Image source: Terry Zaperach for NASA.