A Motley Fool analyst talks shop with Sanjay Bakshi, one of the best value investors of our time.

This article is the second half of a two-part interview with Sanjay Bakshi, one of the great minds in value investing and behavioral finance in India. A finance professor, he also writes a popular blog called FundooProfessor, where he discusses investing and behavioral economics. In this part of the interview, Motley Fool analyst Rana Pritanjali asks Bakshi about learning from mistakes, why macro events are hard to predict, the shorter lifespan of an average company in the S&P 500, and more. To read the first part, click here.

Rana Pritanjali: How important is it to incorporate macro events in your analysis? More importantly, how practical is it to predict those events? The Latin American countries and the energy market are two recent examples. When I look back now, everything that happened seems so obvious, but I still wonder if the situation in other countries is any different and it's just a matter of which country throws in the towel first. Doesn't stock-picking become almost impossible if you try to incorporate a macro prediction in your analysis?

Sanjay Bakshi: macroeconomics has too many moving parts as compared to microeconomics. I don't pay much attention to macro factors like interest rates and currency exchange rates, and I don't think they are predictable, anyway.

Some years back, I did a case study on Relaxo, India's largest branded footwear manufacturer. Last year, that business sold 112 million pairs of branded footwear at less than $2 a pair and delivered a pre-tax return on equity of 47%. Most of Relaxo's products are made up of rubber and EVA (a petroleum derivative), which are global commodities whose prices tend to fluctuate quite a bit. But if you look at the volatility of the input prices and compare it with the volatility of Relaxo's margins, you'll find that the former is volatile and the latter is not. Why? Because Relaxo follows the simple notion of buying commodities and selling brands. It has the ability to pass through cost inflation to customers without fear of loss of unit volume or market share. And that ability comes from the ownership of brands.

And the ownership of brands is just one source of creating such a resilience. There are others. I know of cotton yarn manufacturers whose gross margins just don't change as compared with price of cotton, and there are specific reasons for that. There is no brand, and yet there is this resilience from huge volatility in input prices.

Rana: Are smaller companies at an advantage because they have a smaller revenue base and hence provide better opportunities? Growth is easier to come by, even if they don't have a track record of 25 years. Wal-Mart can try everything but still won't be able to grow by more than 4% to 5% because of its large revenue base. Should I expect a below-average return from a company that is less risky than the market? And if I want an above-average return, should I be willing to take more risk?

Sanjay Bakshi: Smaller businesses obviously have that mathematical advantage you refer to over larger businesses, but then, the average small business is also riskier than the average large one. One only has to live though a severe recession to learn that lesson.

It's also true, in my view, that even after considering the additional risk in smaller businesses, the stock market misprices (undervalues) them. One reason, of course, is that their stocks are relatively illiquid, so there is less competition.

One filter I use before I contemplate investing in a business is to ask: Can this become a 10-bagger or even a five-bagger? Often the answer is overwhelmingly no because of the reasons you mentioned above. So, I just let them be. But by no means is it necessary for other value investors to let them be. There's nothing wrong in making lower rates of investment return on large businesses, and occasionally they too get massively mispriced.

Rana Pritanjali: The market's return in the past decade can be attributed to tech companies or companies that use tech platforms. Do you think there's been a structural shift in the way business is done? And are there opportunities available for new companies because of this change?

Sanjay Bakshi: The pace of change will only accelerate over time. According to Vala Afshar, the average time a company spent in the S&P 500 in the 1960s was about 60 years. Today, the average is 10 years. 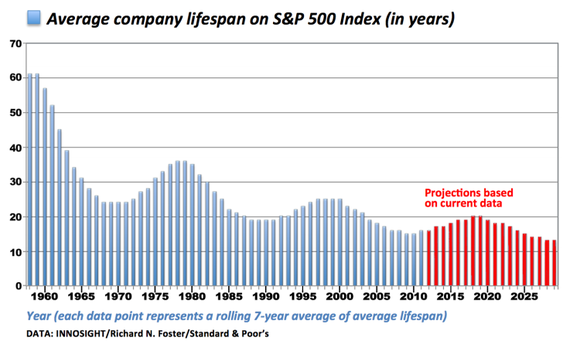 Obviously, there is lot of money to be made if one can identify the disruptors early. I find that hard to do, however. I do remain paranoid about the risk of my firm's portfolio businesses being disrupted by technology. Following people like Afshar on Twitter and reading books on the subject helps.

Rana Pritanjali: As I spend more time in the investment industry, I feel like experience has its pros and cons. On the one side, with time, as you face new challenges and situations, you can build investment strategies that should protect your portfolio from similar adversities in the future. (You can use someone else's experience, too, but I think my mistakes teach me most.) However, the biggest con is that with time -- even if you don't want to -- you end up accumulating a lot of the market's garbage in your head, especially if you're in the investing profession. How can people get the best out of their experience?

Sanjay Bakshi: The trick is to not just learn from your own experience but to learn from others'. Charlie Munger likes to say that you don't have to pee on an electric fence to learn not to do it.

Your question mentioned "accumulating a lot of the market's garbage." Well, how do you fix that? The solution is to switch off the market. Instead, focus on studying extreme success and failures in business and in investing. Take the live case study of Valeant Pharmaceuticals, which I am covering in my class. It has some of the most wonderful lessons in the world of business and the investment decision-making process.

About learning from own's own experiences I have two suggestions. One is to periodically monitor the quality of one's decisions, and the way to do that is to write down your investment thesis and then objectively measure what happens and compare that with the original thesis. Sometimes things will turn out to be way better than what you thought. Sometimes, it will be the other way around. By objectively studying one's decisions, one can, over time, calibrate one's confidence levels and become more rational.

The second suggestion is to focus a lot on one's mistakes. Making mistakes is OK. It's part of life. Perpetuating them is not. So, just by focusing on one's past mistakes, one reduces the chances of making them again. And the way to focus on them is to talk about them with your friends and trusted colleagues. You really have to, as Charlie says, rub your nose in them. If you want to become a learning machine, focus on errors of judgement.

Rana Pritanjali has no position in any stocks mentioned. The Motley Fool owns shares of and recommends Valeant Pharmaceuticals. Try any of our Foolish newsletter services free for 30 days. We Fools may not all hold the same opinions, but we all believe that considering a diverse range of insights makes us better investors. The Motley Fool has a disclosure policy.