There is a lot of upheaval going on in Cheniere Energy's boardroom, and very rarely does the market like instability at the upper levels of the company.

What: Shares of Cheniere Energy (LNG 1.48%) declined more than 23% in December after activist investor Carl Icahn led a campaign that ended with the ouster of founder and CEO Charif Souki just before the company announced that it had started production at its Sabine Pass LNG export facility in Louisiana. 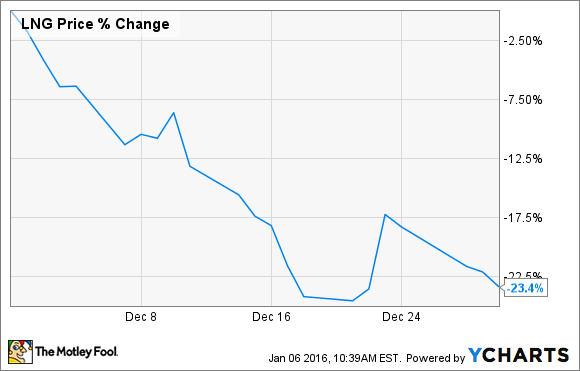 So What: Well, that was pretty quick. In less than six months Icahn built a massive position in the company, got two of his people on the board of directors, and led a boardroom revolt that ended with Souki getting booted from his CEO position. The reasoning behind Icahn's plans to remove Souki was that he was taking the company in reckless directions when it has a solid cash generating business that can be returned to shareholders rather than fueling growth into other markets such as crude oil exports.

Souki says that he will remain on the board until the company's annual meeting in June, which I'm sure will lead to some interesting board discussions in the interim.

Now What: The wheels will hit the road for Cheniere Energy in 2016. Up until now, investors have needed to base their investment in the company on projections of EBITDA and potential profits. Now, with the Sabine Pass facility up and running, we will get to see what those revenue streams will actually look like.

If the company does deliver on its projections then Cheniere's 50% slide in 2015 might be reversed pretty quickly, but if it doesn't then we could definitively see even further declines. Without a CEO in place and the company just getting its first operations started, there are too many things up in the air to make a true long term investment in this company, so it's probably best to hold off on any investment decision.

Why Chevron, Occidental Petroleum, and Devon Energy Rallied This Week