What: Shares of Western Refining (NYSE:WNR) declined more than 22% in December thanks to overall weakness in the refining industry as well as an announcement that it had revised its bid for Northern Tier Energy (NYSE: NTI). 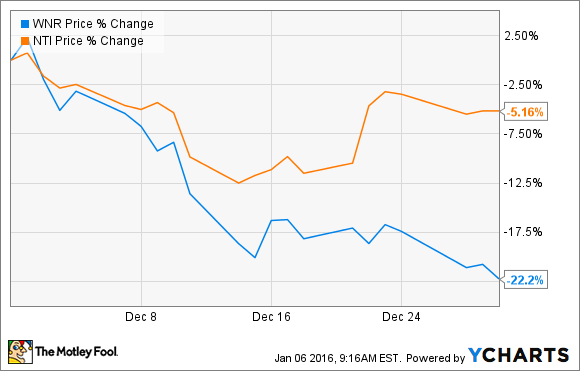 So what: Like just about every other independent oil refiner in the US this past month, shares of Western Refining took a pretty hard hit after Congress lifted crude oil export restrictions. Many investors see the lifting of a ban leading to higher domestic crude prices and, in turn, lower refining margins. While that is certainly a possibility, keep in mind that refiners have been enjoying uncommonly high refining margins over the past several quarters as crude prices have fallen in general.

Now what: Both of the things that seem to be putting pressure on Western Refining shares aren't really a huge deal in the grand scheme of things. Buying up the rest of Northern Tier's shares outstanding is a good long term decision because Northern Tier continues to be one of the best performing refiners in the nation with low feedstock costs and high returns on capital. The ability to export crude oil may increase domestic oil prices slightly, but compared to the overall drop in prices it's a drop in the bucket.

The longer term question for Western Refining is its ability to integrate Northern Tier into its current operations without disrupting what it had been doing so well for the past few years. If it can do that, then Western Refining's current share price suggests that it's pretty undervalued.