Please ensure Javascript is enabled for purposes of website accessibility
Log In Help Join The Motley Fool
Free Article Join Over 1 Million Premium Members And Get More In-Depth Stock Guidance and Research
By Bradley Seth McNew - Jan 6, 2016 at 7:18AM

The market hasn't reacted well to Starbucks' outstanding fiscal 2015, but the company shows plenty of growth opportunities for the new year.

In December 2015, Starbucks announced a partnership with on-demand delivery service Postmates for a pilot program, where customers in the coffee company's hometown, Seattle, can have Starbucks' food and beverages delivered to them. Image credit: Starbucks.

Despite reporting record revenue and soaring net income for fiscal year 2015, shares of Starbucks (SBUX 1.19%) are roughly 6% lower today than on October 28th, the day before the corresponding earnings release. There doesn't seem to be a specific reason that investors had jitters following Starbucks' 2015 performance, so instead of speculating about why the market didn't reward Starbucks for its success, let's examine why its stock looks solid for the new year.

Increased earnings and dividend
Starbucks increased earnings from $2.1 billion in fiscal year 2014 to $2.8 billion in fiscal year 2015. That translates to 33% year-over-year growth. The ability to grow income at that pace is impressive for a mature company. Compare that to Dunkin' Brands Group (DNKN), for instance, which had declining net income of about 1% over the same period.

The Seattle-based company's EPS grew 35% during fiscal year 2015, bolstered by 7% same store sales growth globally, a 10 basis point widening of its operating margin, and the company's decision to buy back 29 million shares during the year. It's likely that Starbucks will continue to grow EPS in fiscal year 2016, as the company seems primed to boost sales and store count -- not to mention, the company has another 59 million shares already authorized for repurchase.

Then there's Starbucks' dividend. Since Starbucks started paying a dividend six years ago, its quarterly payout has increased steadily each year. Starbucks' board of directors has already approved a 20% dividend increase for FY 2016. 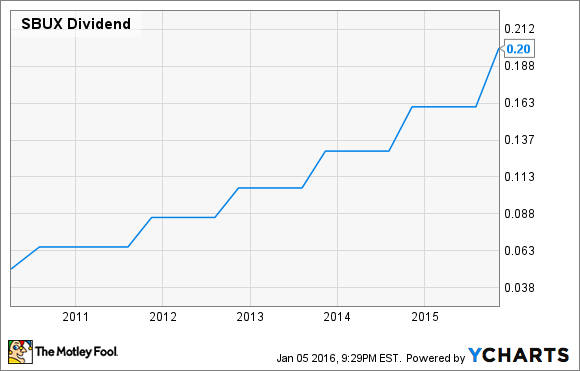 Relatively attractive valuation
Starbucks' P/E ratio currently sits at 32.9 times earnings. That's high relative to the market, as the average P/E ratio among S&P 500 stocks is 23 right now. Yet it's only slightly more elevated than its under-performing competitors, and it's meaningfully below the industry average. To this end, shares of Dunkin' Brands and McDonald's (MCD 1.12%) both trade above 24 times earnings, and the industry average is around 33.

With plenty of long-term upside left
Starbucks opened 1,677 new stores in fiscal 2015, for a total of over 23,000 stores in 68 countries. Approximately 54% of those stores are in the United States. This implies that Starbucks still has an incredible opportunity to expand abroad, especially in Asia which was the leading region in terms of same stores sales growth in 2015, up 9% compared to the year-ago period.

CEO Howard Schultz says that he plans to ramp up growth in China, and expects to eventually have more stores there than in the U.S. That's a long shot, as the number of stores are currently six to one favoring the U.S. over China. But it nevertheless goes to show how much growth potential Starbucks has in the densely populated East Asian country. 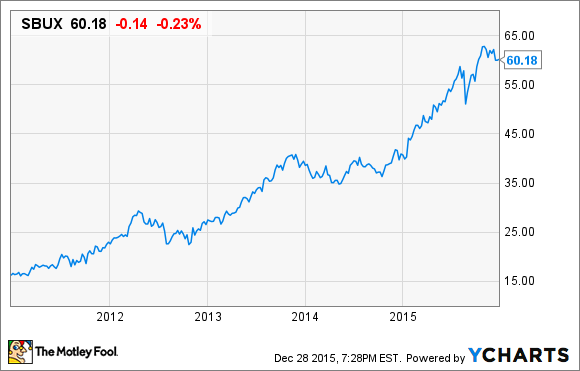 Starbucks' stock price has risen steadily in the last few years, even through periods of short-term price dips that come about once or so year, as seen in the graph above. We seem to be in one of those temporary corrections now. Consequently, after a solid fiscal year 2015, and with plenty of growth opportunities ahead, this may be a good time to bet on Starbucks for the new year.

Bradley Seth McNew has no position in any stocks mentioned. The Motley Fool owns shares of and recommends Starbucks. Try any of our Foolish newsletter services free for 30 days. We Fools may not all hold the same opinions, but we all believe that considering a diverse range of insights makes us better investors. The Motley Fool has a disclosure policy.