The better-burger chain fell victim to valuation concerns last year. Is a better 2016 ahead?

What: Shares of The Habit Restaurants (HABT) were looking less tasty to investors last year, falling 29%, according to data from S&P Capital IQ. The recently IPO'd burger chain seemed to get caught up in the headwinds facing many fast-casual chains investors have cast aside as overvalued. As you can see from the chart below, the bulk of the decline came over the summer months. 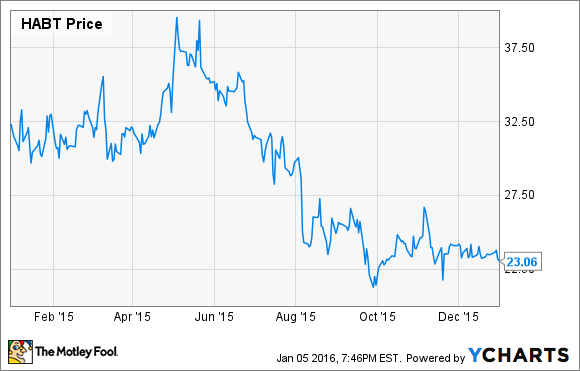 So what: The better-burger chain came on the public markets in 2014 and hit the ground running, but like many recent fast-casual IPOs, Habit carries a steep, triple-digit P/E. We've already seen several such stocks tumble after bright debuts, including Noodles & Company, Potbelly Corporation, and El Pollo Loco, and it seems that Habit is being influenced by the same forces. The stock's decline since May has also mirrored another high-flying better-burger chain, Shake Shack. Both have faced valuation concerns, though their results have been different.

As for Habit specifically, in May the stock was shaken by announcements at rival restaurants. On May 4, the stock rose 12%, apparently because investors did not like the sound of McDonald's Corp.'s turnaround plan. Then the stock fell 8% on May 22 as Shake Shack filed to trademark ChickenShack, causing speculation that it may launch a chain of chicken restaurants. The bearishness around Habit's valuation seemed to be confirmed after its second-quarter earnings report in early August. Despite a strong performance, which included same-store sales growth of 8.9%, the market sent the stock down 14% in response to an underwhelming forecast for the year. For the year, the company expected same-store sales growth to slow to 5%.

Now what: The stock bounced back 8% on its third-quarter earnings report, but quickly shed those gains. With its lofty valuation and minimal profits, Habit's stock performance has been mostly divorced from its actual results. Comparable sales appear to be slowing, though the company lifted its outlook in its last quarterly report. Looking to 2016, I'd expect more solid improvement on the top and bottom lines from Habit as the company plans to open 30 to 32 company-owned stores. Analysts' expectations are relatively modest, however, so strong comparable sales growth and an improvement in operating margin should help boost the stock.

Jeremy Bowman owns shares of HABT and SHAK. The Motley Fool has no position in any of the stocks mentioned. Try any of our Foolish newsletter services free for 30 days. We Fools may not all hold the same opinions, but we all believe that considering a diverse range of insights makes us better investors. The Motley Fool has a disclosure policy.