It's just a concept car, and it's unlikely to be built in its current form; but it gives us a preview of VW's plans for entering the mass-market electric-vehicle market, and they're big.

Volkswagen (VWAGY -2.26%) unveiled a new concept vehicle in Las Vegas on Tuesday. The "BUDD-e," as it's called, is essentially a modernized riff on the old VW Microbus, with a twist: It's a battery-electric vehicle.

For now, the BUDD-e is a "concept," which means that it's not something that VW has announced plans to build. And it includes some features and twists that are almost certainly flights of fancy, not things likely to make it into vehicles we can buy.

But it's still significant. Here's why.

A glimpse of VW's new electric-car "toolkit"
New VW CEO Matthias Mueller has made it clear that he plans to move past the massive diesel-emissions cheating scandal that has engulfed his company, in part by boosting VW's efforts with electrified vehicles.

It will almost certainly be at least a couple of years before we start to see the next generation of electric VW Group products show up at dealers. But the BUDD-e is important because it's the first VW-brand vehicle based on the company's upcoming "Modular Electric Toolkit," often referred to as -- using its German abbreviation -- "MEB."

In VW-speak, a "toolkit" is like a Lego set for building cars. It's a set of components that can be arranged to serve as the basis for a number of different vehicles. The vehicles themselves may be quite different, but the toolkit enables VW to share parts -- and maybe more importantly, engineering -- among a bunch of different models. In theory, at least, that saves money, improves quality, and allows VW to introduce new models without extensive development time. 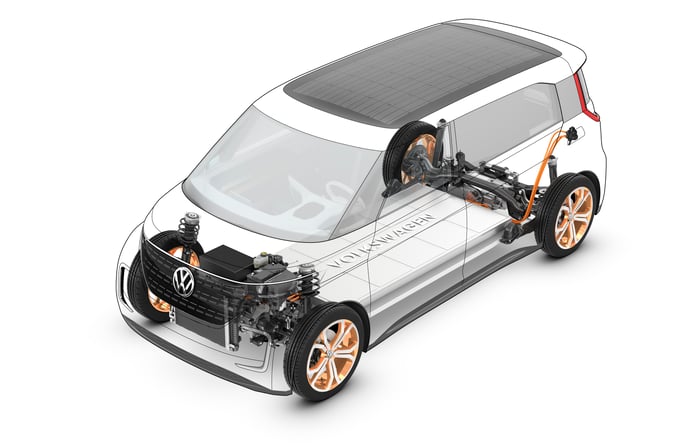 This cutaway illustration shows the MEB "toolkit" components powering the BUDD-e, including the battery pack in the vehicle's floor. Image source: Volkswagen.

VW has several toolkits, but MEB is a new one. It's significant because it's the first to be all about battery-electric vehicles. It's expected to underpin several new all-electric models that will be introduced during the next few years, across several of VW's brands. If the specifications for the BUDD-e concept accurately reflect what VW will be able to deliver on its production vehicles, then it could be a significant leap forward for electric cars.

Range that should make VW a mass-market EV contender
Here's why it might be a significant leap: VW says that the BUDD-e has a 101 kilowatt-hour battery that will enable up to 373 miles of range as measured by the European Union standard. That sounds super-impressive.

But we should note here that the EU standard is more optimistic than the U.S. Environmental Protection Agency's (EPA) standard for measuring the range of electric cars. The current 85D version of Tesla Motors' (TSLA -0.56%) Model S sedan is rated at 528 kilometers (327.4 miles) of range by the European standard, but it gets a more conservative 270 mile range rating in the U.S.

During the presentation that followed the unveiling of the BUDD-e, VW officials suggested that a real-world range of 233 miles was realistic. That's enough to make it a legitimate alternative to a gasoline-fueled car. But it's a mark that other rivals are almost certain to hit before the first MEB-based VWs come to market.

But VW is arguably playing catch-up in the electric-car race
Right now, if you want a battery-electric car with range comparable to an internal-combustion-powered model, you really only have one choice: Buy a Tesla.

Teslas are great vehicles. But they're big, heavy, and expensive because they're designed around the big, heavy, expensive battery pack that enables their impressive range.

Reducing the cost (and weight) of a battery pack that can deliver 200 miles or more of range in a vehicle priced to compete with mass-market internal-combustion vehicles has been a key priority for automakers and battery developers during the last few years. With the BUDD-e, VW seems to be signaling that it has solved the problem.

Others, however, have given the same signal, and VW is arguably playing catch-up here. By the time an MEB-based VW comes to market (around 2019, VW executives say), General Motors (GM -1.64%) and Nissan (NSANY 0.25%) -- not to mention Tesla, and perhaps others -- will almost certainly have mass-market-priced electric cars available with more than 200 miles of range.

Whether or not VW leads the market, or is merely in the forefront, it's clear that the German giant plans to be a major player in the battery-electric car competition. Can it deliver? We'll find out.