Having endured a brutal year, shares of Internet radio pioneer Pandora Media (NYSE:P) head into 2016 with a slight spring to their step. 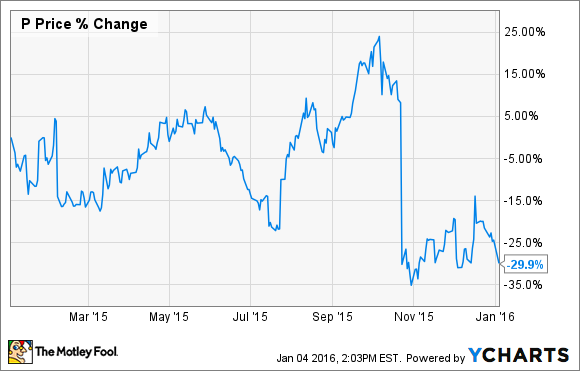 Last month, Pandora received what many interpreted as a positive ruling for its royalty rates , arguably the most important element of its cost structure. So what does this mean for Pandora amid rising competition  from Apple (NASDAQ:AAPL), and Spotify?

Good, not great news
Pandora's shares spiked in late 2015 in reaction to the U.S. Copyright Royalty Board's Web IV ruling, though they eventually moderated. The general consensus, which its stock spike also signaled, is that the ruling proved far better than some feared. Here's how its per-song cost structure will function for the year ahead versus last year.

According to reports, the major labels sought payouts in excess of 20 cents for every 100 plays , which could have further pressured Pandora's already cost-laden business model. In a statement released by the company, Pandora CEO Brian McAndrews commented,  "This is a balanced rate that we can work with and grow from. The new rate structure will enable continued investment by Pandora to drive forward a thriving and vibrant future for music." To be sure, the news will provides greater clarity and certainty for Pandora and its shareholders in the year ahead. The ruling could have been far worse, and that in its own way is a genuine positive for the company. However, the question still remains how does this affect the outlook for Pandora's stock in 2016?

Cautiously optimistic for 2016
I'm a fairly well documented Pandora skeptic, but it's impossible to observe a few of Pandora's recent strategic initiatives and not concede the company is headed in the right direction. Pandora's decision to purchase ticket sales start-up Ticketfly for $450 million creates another highly complimentary revenue stream on which Pandora can monetize its roughly 78 million active users . Its move toward crafting direct licensing agreements  with major record labels will also help remove the cloud of uncertainty that hangs over Pandora's stock during the Copyright Royalty Board's rate setting process. It also opens the door for a broader international expansion as well. And lastly, Pandora's decision to purchase the on-demand assets from the now defunct Rdio  obviously position it to introduce an on-demand product to directly compete with the likes of Apple Music and Spotify. Despite the clear progress, the company faced a few critical risks.

For starters, one has to wonder whether Pandora's pivot toward on-demand streaming is simply too late to drive a meaningful financial impact for the company. At least some evidence suggests that the potential size of the on-demand streaming market is actually significantly smaller than many investors realize. Pandora's sizable installed base certainly offers it an attractive starting point to at least partially counter this risk factor. However, you can rest assured that Apple Music, Spotify, other players will all continue to consolidate market share in the interim before Pandora's own on-demand service goes live.

Turning to its actually shares, Pandora's stock remains richly valued in its own right. Even after its steep declines last year, Pandora's stock still trades hands at a forward P/E ratio of over 100x , nevermind its current dearth of profits to boot. Though the analyst community believes Pandora offers ample growth potential in coming years, the company's current 3.0x PEG ratio also suggests its shares are markedly overvalued today.

Pandora has hopes for a brighter 2016, but investors would do well to realize that the company has to accomplish a lot to follow through on its new initiatives and live up to its current valuation.