Ford is changing the way it accounts for investments in its pension and retiree healthcare funds. The change will have a big positive impact on Ford's reported operating earnings. Here's what's going on.

Ford (F 0.36%) said on Thursday that it has changed the accounting method it uses to track the investments in its pensions and retiree healthcare funds -- a change that will result in a roughly $1.5 billion increase in its reported 2015 profits.

What's the change?
Ford said it will now recognize the investment performance of its pension and healthcare plans at the end of each year instead of amortizing gains and losses over many years. The new accounting method is known as "mark-to-market," and it's a change that has been adopted by some other large American corporations over the last several years.

Why is Ford making this change?
Market returns and interest rate changes can cause the values of portfolios like these to swing wildly. Ford used the amortization accounting method to smooth out the impact of those swings on its earnings.

Ford, like some other companies, found itself in a tough situation after the 2008-2009 market drop left its plans seriously underfunded, meaning the plans didn't technically have enough money to meet their known obligations over time.

In 2012, Ford said that it would "de-risk" its pension and healthcare funds. Since then, it has shifted the portfolios toward more stable fixed-income investments, contributed an extra $11 billion to the plans, and paid out about $4 billion in lump sums to retirees who agreed to give up their pensions.

As a result of these efforts, Ford's global pension plans went from being underfunded by $19 billion at the end of 2012 to $9.8 billion at the end of 2014. In an interview this morning, Ford's comptroller, Stuart Rowley, told me in an interview on Thursday morning that the 2015 year-end number is significantly lower, though the specifics won't be announced until Ford reports 2015 earnings later this month.

What's more, the shift to fixed-income investments has made the portfolios much less volatile. As a result, Ford is now comfortable switching to the mark-to-market accounting method.

And here's the benefit. Since 2010, Ford said, amortization expenses have hit Ford's operating profit to the tune of about $4.3 billion. Rivals General Motors (GM 0.87%) and Fiat Chrysler (FCAU), who still use the amortization method, but who were both able to start at zero after emerging from bankruptcy in 2009, have had much smaller impacts over that same period. 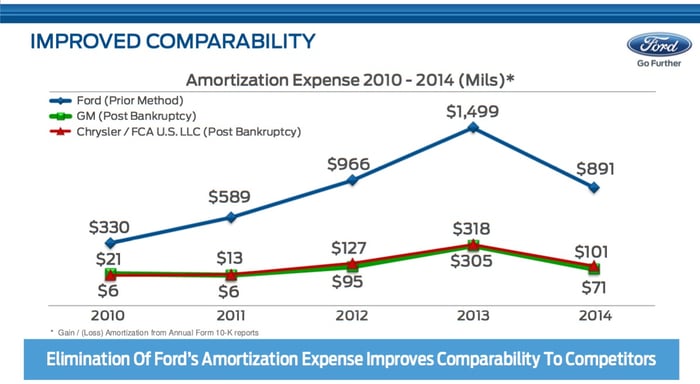 How does Ford get an extra $1.5 billion out of this?
Simply put, it's because the amortized pension swings will no longer be rolled into the results for Ford's regional business units. Instead, they'll be reported as special, one-time items.

This mostly affects results for Ford North America and Ford Europe, though there is a small effect on results for Australia as well, Rowley told me. Ford released this chart showing how the change would have affected its earnings results since 2011. As you can see, the result is a hefty increase for each year, including a $1.2 billion increase for the first nine months of 2015. 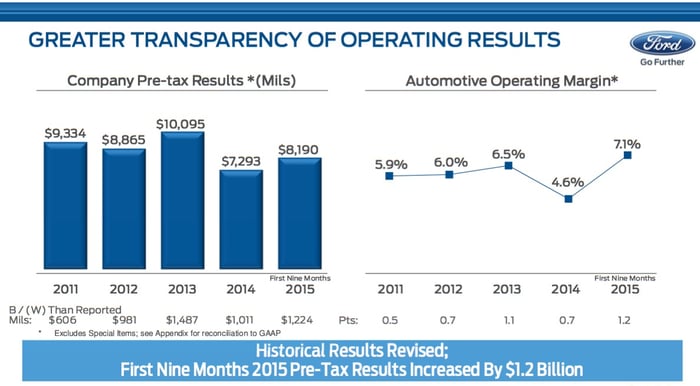 What does this mean for Ford investors?
Ford doesn't actually get any additional cash out of this accounting change. For investors, it mostly means we have to reset our expectations. But it's important to note that this change doesn't seem intended to mislead us into thinking that Ford is doing better than it really has been. Ford's view is that this approach is less misleading than the amortization method it has used in the past.