An extended review date for its lead compound puts investors in a sour mood.

What: Intercept Pharmaceuticals (ICPT 0.24%), a clinical-stage biopharma focused on diseases of the liver, ended 2015 on a sour note, with its shares sitting 2% lower at the end of December than when they started, according to S&P Capital IQ. 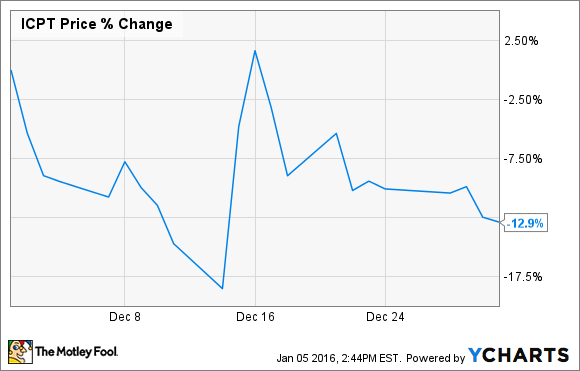 So what: As the chart above shows, investors were put on a bit of a wild ride during the month. Shares skyrocketed in the middle of December as rumors were flying around that Shire (NASDAQ: SHPG) might be interested in acquiring the company. While Shire does have a history of acquiring clinical-stage companies, those rumors haven't yet turned into an official offer. Traders quickly grew tired of waiting and shares of Intercept Pharmaceuticals quickly returned back to earth.

Shares continued their slide through the remainder of the month as the company let investors know that the Food and Drug Administration had extended its PDUFA date to review its drug obeticholic acid, or OCA, as a potential treatment for primary biliary cholangitis. The agency asked Intercept for additional clinical data related to its submission and moved its target review date back three months from Feb. 29, 2016, to May 29, 2016, while it reviewed the new data.

The combination of the Shire rumors turning out to be false and the delay in the FDA decision appears to be the main reasons for the sell-off.

Now what: After the company's stock were parabolic two years ago, shares of Intercept Pharmaceuticals have been in a steady decline, so December just appears to be a continuation of that trend. 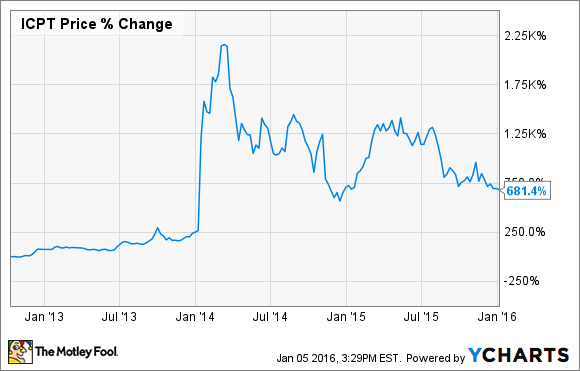 Seeing the FDA delay its PDUFA date is never fun. If Intercept Pharmaceuticals is able to win marketing authorization for OCA as a treatment for primary biliary cholangitis, then its stock could once again become a winner. That would also bode well for OCA's chances down the road as the company is also studying OCA as a potential treatment for nonalcoholic steatohepatitis, or NASH, and if it can win that, then the drug could turn into a massive winner.

The FDA has a planned advisory committee meeting on April 7, 2016, to discuss OCA, so investors will likely have to wait until then to get an update.