December was a particularly brutal month for Apple (AAPL 1.01%), as pessimism over iPhone sales weighed on shares and caused the Mac maker to close out 2015 as a laggard. It also certainly doesn't help that the broader market is losing its cool over continued fears about a China slowdown, and China's stock market is going nuts right now, too. But patient Fools know that it's actually times like these that end up being opportunities in disguise.

Specifically, there's been numerous headlines over the past month that suggest that Apple is reducing iPhone orders, which is presumably due to weak demand or low sell-through. The most recent headline was when the Nikkei Asian Review said that Apple was decreasing iPhone production by 30% sequentially for the fiscal second quarter, citing "several parts suppliers."

For the most part, it's just noise, but noise that you can potentially take advantage of.

Selective attention
It is always interesting how no one puts much thought into those headlines when Apple increases component orders (like reports from September that Apple was increasing iPhone display orders), yet investors are trigger-happy with the sell button whenever headlines surface of potential order reductions.

I've mentioned this on numerous occasions, but it bears repeating: the most important thing to remember is that Apple's supply chain is a living, breathing entity. Except for a handful of components, Apple sources iPhone ingredients from multiple suppliers and has ongoing flexibility to modify and cancel orders with those suppliers.

Tim Cook has acknowledged these types of rumors before, explicitly saying that these types of headlines and possible data points are "not a great proxy for what's going on." But if investors insist on overweighting these types of storylines, so be it. The contrarians will thank them later.

But if that happens, then it will actually create an important divergence between investor sentiment and fundamental reality. If investors are already freaking out about rumored iPhone order cuts, how would they respond to the company officially reporting the first year-over-year decline in iPhone units?

Here's the important part, though. Even after investing heavily in capital expenditures, Apple's price-to-free-cash-flow valuation is the lowest it's been since the financial crisis. 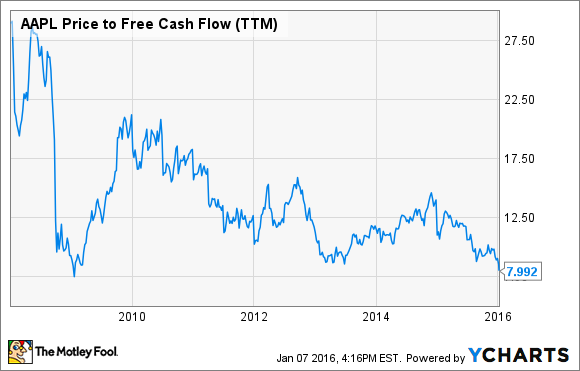 Even from an earnings perspective, shares are now trading at just 10.5 times earnings, flirting with single-digit territory. I'm quite confident that no matter what happens with iPhone unit sales, earnings per share will put up a healthy increase thanks to share repurchase activity. Combined with a potential sell-off if iPhone units fail to impress, the earnings multiple could very well fall into single-digit territory.

Put simply, Apple doesn't need iPhone growth to be a compelling and attractive investment. Investors just want it (as usual).