Energy stocks, in particular, may have a hard time keeping dividend payments high in 2016.

Dividends are a great way for investors to generate cash flow, and even beat the market long term. But dividends aren't a guaranteed payment from a company, and still require cash flow from operations to be maintained. For that reason, they can be higher risk than a lot of investors think.

Below are three companies that I think will have a hard time maintaining their dividends in 2016.

Noble plc
One of the last remaining offshore drilling companies paying a dividend is Noble (NEBLQ), and I think that ends in 2016. The company reduced its payout after the third quarter from $0.375 per share to $0.15 per share, but even that may be too much in today's environment.

It isn't that Noble couldn't pay a dividend in 2016; it's that the money could be better used elsewhere. Long-term debt stood at $4.5 billion at the end of the third quarter, and less leverage on the balance sheet would be welcome with new drilling contracts hard to find. Most major competitors have already slashed their dividends to $0; it wouldn't be a shock to investors to get a lower dividend.

TerraForm Power
When dividend yields rise to double digits, it can be a sign that investors don't really expect the payout to last long. That's the case with TerraForm Power (TERP) heading into 2016. As I'm writing, the stock yields a whopping 11.1%, which is so high it will create problems for the company long term.

In 2016, I think TerraForm Power would be better off reducing its dividend to either fund asset acquisitions, or reduce a debt load that stood at $2.5 billion at the end of the third quarter. A lower payout would be a prudent move to reduce risk this year.

Chevron
It may seem outlandish on the surface, but I think 2016 will prove to be a tough year for big oil stocks. They've held up fairly well under lower oil prices because they have diverse businesses, but $35 per-barrel oil, and gasoline under $2 per gallon doesn't leave a lot left for profit. One that could be in big trouble is Chevron (CVX 0.83%), which is already paying more in dividends than it can afford.

The problem is easy to see in the chart below. Earnings are plunging, and are now almost below what's paid out to each share in the form of a dividend. 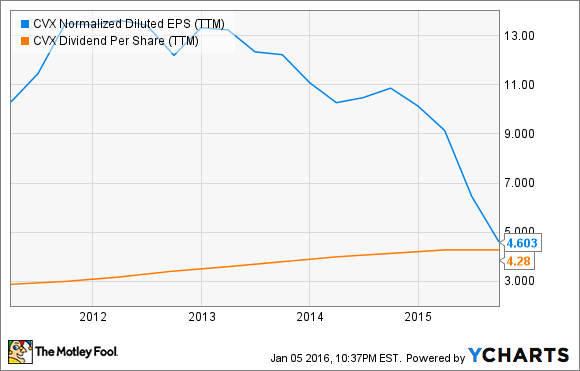 In 2016, analysts are expecting that earnings will fall to $3.42 per share -- meaning the coverage ratio of earnings to the dividend would be just 80%.

Worse yet, even after slashing its capital spending plan to $25 billion - $28 billion, down from $35 billion last year. The company is still expecting to spend more on drilling for oil and paying dividends than it generates in cash from operations. That means the only way to pay the dividend is to add debt, which isn't a good sign after debt increased from $27.8 billion to $35.9 billion during the past nine months.

Chevron's best move in 2016 will be slashing its dividend to keep cash inflows more in line with outflows. Whether or not it does so may be another story.

Travis Hoium has no position in any stocks mentioned. The Motley Fool recommends Chevron. Try any of our Foolish newsletter services free for 30 days. We Fools may not all hold the same opinions, but we all believe that considering a diverse range of insights makes us better investors. The Motley Fool has a disclosure policy.