Weak demand and excessive promotions caused Pier 1 shares to plunge for the second year in a row.

What: Shares of home-goods seller Pier 1 Imports (PIRRQ) fell out of bed last year, tumbling 67%, according to data from S&P Capital IQ. A series of disappointing results proved to be the culprit as the stock fell steadily throughout much of the year: 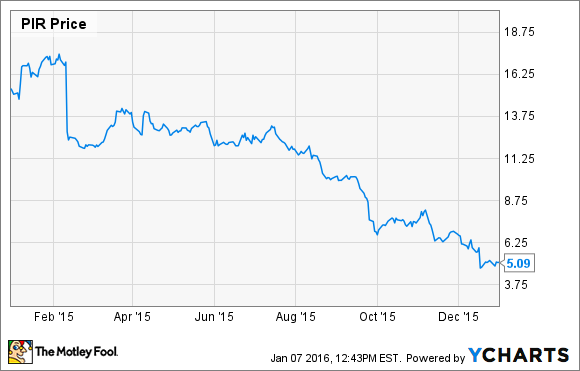 So what: Though 2015 was a good year for the home-improvement chains, Home Depot and Lowe's, higher-end chains such as Restoration Hardware and Williams-Sonoma followed Pier 1's lead, but none fared as poorly.

It's easy to understand why. Profits evaporated, continuing a nearly three-year decline in its stock price and earnings per share. In fiscal 2013, the company reported earnings of $129 million. Over the last four quarter, by contrast, that's been cut to only $61 million.

The stock began plunging when the company revised its fiscal 2015 guidance, adjusting its earnings-per-share forecast from $0.95-$1.05 to $0.80-$0.83, and firing its CFO for the oversight. Analysts responded by slashing forecasts for the coming fiscal year and shares fell 18%.

The next day of reckoning for shareholders came in September when the stock fell 12% in a single session following its second-quarter earnings report. Net income crumbled in the quarter, falling 65% to $0.04 per share as inventory growth outpaced sales growth, indicating weak demand for the company's products.

The third-quarter earnings report brought more pain, as the company reduced its full-year guidance once again on the heels of flat same-store sales and contracting profit margins. A week into the new year, the stock has continued to fall, dipping below $5 a share.

Now what: It's not entirely clear what's ailing Pier 1. Brand preferences shift, but the market for home goods and furnishings should be getting stronger as homebuying is at its healthiest levels since the recession. Sales have also been increasing throughout the year, though that appears to be due to excessive markdowns, which explains why profits are falling even as comps rise.

With Wall Street expecting little of a bounce-back this year, investors' best hope at this point may be a buyout. Speculation of an acquisition would at least put a floor on the stock price, which is what shareholders desperately need after consecutive years of losses.

Jeremy Bowman has no position in any stocks mentioned. The Motley Fool recommends Home Depot, Restoration Hardware, and Williams-Sonoma. Try any of our Foolish newsletter services free for 30 days. We Fools may not all hold the same opinions, but we all believe that considering a diverse range of insights makes us better investors. The Motley Fool has a disclosure policy.