Please ensure Javascript is enabled for purposes of website accessibility
Log In Help Join The Motley Fool
Free Article Join Over 1 Million Premium Members And Get More In-Depth Stock Guidance and Research
By Todd Campbell - Jan 9, 2016 at 6:00AM

A win and loss for marijuana, a big advance in Alzheimer's disease, and the next big thing are among some of the market-moving things I expect to see happen this year.

Few industries see change as rapidly as biotech, and that makes issuing predictions for biotech companies a lot like stepping out onto an already-broken limb. Nevertheless, last year, I issued five predictions that, for the most part, panned out, and this year, I'm stepping out onto that limb again by predicting that these five things will impact biotech investors in 2016.

This year, I think it will remain tough sledding for the company in spite of (or perhaps, because of) recreational and medical marijuana laws passing in additional states, including California, this November.

Data has been encouraging, and if that continues, Epidiolex could provide patients with an FDA approved option, but I'm not sure how much the company could make selling Epidiolex.

If marijuana laws pass, and marijuana products heavy in CBD become readily available at local dispensaries, they could put pressure on Epidiolex's pricing. Further, competitors, including Insys Therapeutics (INSY), are developing their own CBD alternative medications to Epidiolex that could crimp GW Pharmaceuticals' market opportunity, too. Those risks make it too tough for me to justify GW Pharmaceuticals' $1.3 billion market cap.

No. 2: Alzheimer's disease treatment nets a breakthrough
Roughly 99% of all Alzheimer's drugs to enter human trials have ended up in the trash heap, but trials are under way evaluating drugs that could soon reshape patient treatment.

For example, Eli Lilly & Co. (LLY -0.11%) has a phase 3 study of solanezumab under way in mild to moderate Alzheimer's disease patients that may slow disease progression by breaking up amyloid plaque buildups thought to be a major cause of the disease.

Biogen (BIIB 1.65%) aducanumab seeks to do something similar, and that drug is also in phase 3 trials. Both companies have earlier stage programs under way evaluating other drugs, including BACE inhibitors that could prevent plaque buildup in the first place.

A breakthrough could also come from programs under way at less mature biotech companies, including Axovant Sciences (AXGT -2.27%) and the much riskier Anavex Life Sciences (AVXL 0.52%).

However, of the two, I believe Axovant Sciences is the better bet.

Axovant Sciences' adjunct approach, top-shelf leadership, and $320 million stockpile of cash on the books simply gives me more confidence in it than Anavex Life Sciences, which recently moved its shares from the wild west of the pink sheets to the NASDAQ exchange.

Although Anavex Life Sciences' Alzheimer's disease program should offer up plenty of data to digest this year, its research program is very early stage, and the company's balance sheet is worrisome enough for me to avoid it until placebo-controlled trial results are available.

No. 3: The year of big pharma
In the past five years, big cap pharmaceutical stocks have lagged biotech stocks because they've struggled to fill revenue gaps created by the patent cliff.

However, that under-performance may end this year given that major patent expirations during the patent cliff, which peaked in 2012, have been digested, and expense-cutting programs have been put in place to boost profitability.

Pfizer (PFE 0.12%), for example, is seeing sales of its former $13 billion Lipitor stabilize at around $1.6 billion annually, and M&A, including its $160 billion proposed deal to buy Allergan (AGN), is bolstering the likelihood of future revenue growth. Meanwhile, cost-cutting since Lipitor's patent expiration should mean more of Pfizer's revenue will flow to the bottom line in the future than it has in the past. 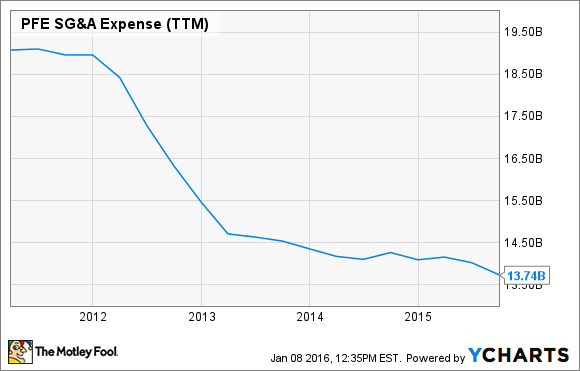 Another reason I think big pharmaceuticals could outperform biotech this year is because they're less reliant on one or two high-priced biologics for their revenue. Instead, they generate revenue from a variety of drugs, and that helps insulate them against the risk of payer and political push-back on drug prices. Couple revenue diversity with the fact that inelastic demand (and healthy dividend yields) make them attractive investments when markets stumble, and you've got a nice recipe for success.

No. 4: CAR-T takes a backseat
Research into chimeric antigen receptor T-cell (CAR-T) therapy has captured the attention of investors over the past two years, but safety risks could emerge as trial sizes increase, and that could help shift attention to other promising anti-cancer approaches, including NantKwest's (NK) natural killer cell approach and soon-to-IPO Editas' CRISPR/Cas approach.

NantKwest is biotech billionaire Patrick Soon-Shiong's latest project, and Soon-Shiong, who you may recall is the man behind Celgene Corp.'s (CELG) nearly billion-dollar-per-year cancer drug Abraxane, thinks a therapy involving off-the-shelf natural killer cells will prove to be safer than CAR-T.

Meanwhile, Editas founder Feng Zhang is a leader in an entirely new approach to battle disease that involves editing genes.

The Editas approach (CRISPR/Cas) attempts to mimic a natural immune defense system found in bacteria that involves saving a snippet of an invading virus' DNA that can be used by the bacteria to rewrite the virus's DNA if it returns, preventing it from replicating.

Because the Editas process is potentially applicable across a variety of genetic disease indications, it wouldn't shock me if it becomes one of this year's best performing IPOs, and CRISPR/Cas research becomes a much bigger focus of investors than CAR-T in 2016.

No. 5: Investors will embrace Portola Pharmaceuticals
Last year, I focused on the upside potential for Alkermes, Inc. (ALKS 0.45%), a company developing therapies for central nervous system disorders that I felt was undervalued based on its pipeline potential.

The company plans to report data on betrixaban's ability to out- or under-perform Lovenox in Q1, and if betrixaban does a better job of preventing blood clots in the leg and lung than Lovenox, it could become a multibillion-dollar blockbuster. That's because, prior to losing patent protection, Lovenox was hauling in as much as $4 billion in revenue per year.

Tying it together
Of course, no one knows for certain what will happen this year, and if there's one defining truth of the markets, its that the only thing that's certain about them is uncertainty. Having said that, I'll be keeping tabs on these predictions and updating investors on my successes (and failures) throughout the year.