The year is only a few trading days old, but it's already been a rough year for the markets. Indices around the world sold off hard this week, and many exchange-traded funds that focus on the healthcare space were hit particularly hard. In fact, it was such a dreadful week for healthcare-focused ETFs that the best performer of the week -- the iShares Dow Jones US Healthcare Provider (NYSEMKT:IHF) -- was still down by nearly 5%. About the only good thing you can say about a rotten performance like that is that it was better than S&P 500. 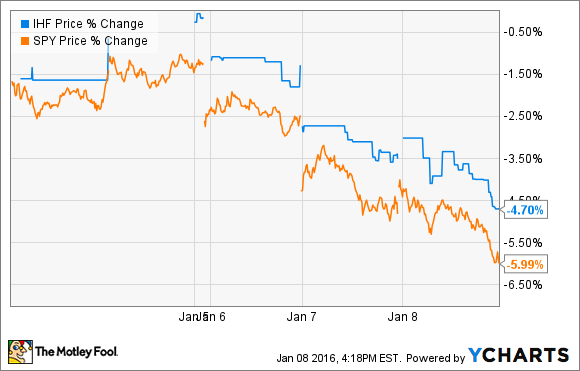 So what's going on inside the iShares Dow Jones US Healthcare Provider that allowed it to hold up better than the S&P 500 this week?

Cracking it open
One distinguishing feature of this ETF is that the majority of its assets are held in just a handful of giant health insurers. A quick glance at this fund's top holdings is quite telling:

The fund's heavy exposure to giant insurance companies helps to make it a lot more stable than other healthcare ETFs. In fact, this fund currently has an equity beta of only 0.47 compared with the S&P 500, which means it experiences less than half of the volatility of the markets in general.

That low beta level might make this fund incredibly boring to own, but when the markets go crazy -- as they did this week -- that stability can help investors keep their head on straight. 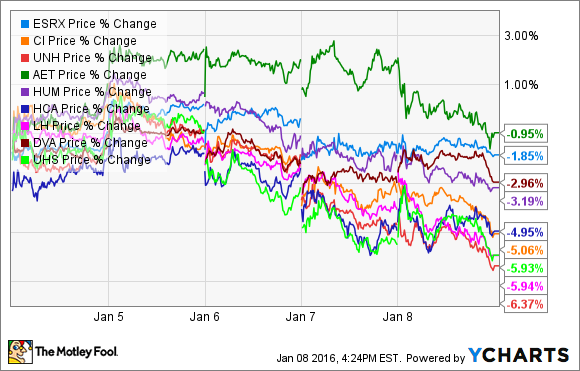 Health-insurance giant Aetna (NYSE:AET) seemed to hold up the best, as it was down only 0.95% for the week. Since there doesn't seem to be any news that allowed it to buck the sell-off, its performance could have to do with its pending takeover of Humana (NYSE:HUM) -- another of the IHF's top holdings -- which shareholders of both companies have approved. The $37 billion deal is expected to close in the second half of the year, and once it does, the combined entity will become the second-largest managed-care company in the United States.

Express Scripts Holding Company (NASDAQ:ESRX) also did fairly well this week, losing 1.85% of its value. Its shares have held steady since it provided investors with good guidance for 2016. Express Scripts believes it will produce adjusted earnings per diluted share of between $6.08 and $6.28 next year, which represents growth between 10% and 14%. For a company of Express Scripts' size, that's a relatively bullish forecast.

Safety in a storm
With the markets taking an enormous step back this week, it was good to see that at least one healthcare ETF was able to hold up so well. If you're looking for a healthcare ETF that owns a collection of high-quality, low-volatility healthcare stocks, this one might be worth a look.