Please ensure Javascript is enabled for purposes of website accessibility
Log In Help Join The Motley Fool
Free Article Join Over 1 Million Premium Members And Get More In-Depth Stock Guidance and Research
By Chris Neiger - Jan 10, 2016 at 8:33AM

Windows 10 is now running on 200 million devices, but Microsoft still has a long road to travel before it sees significant Windows phone growth.

It's been quite a long time coming, but Microsoft's (MSFT 0.69%) Windows platform appears to be gaining favor again with consumers and the enterprise market. In a recent blog post, Microsoft said that Windows 10 adoption rates are outpacing Windows 7 by 140% and Windows 8 by nearly 400%. Altogether, the company said Windows 10 is now running on 200 million devices.

That's great news for the company considering that the past few iterations of Windows have been less than spectacular. There is one caveat to all the Windows growth: Windows 10 is offered as a free upgrade to Windows 7 and Windows 8 users -- something the older Windows versions didn't offer -- which is likely part of the software's current success.

But there's another bit of good news for Microsoft that coincides with additional Windows 10 usage, and that's the fact that more and more users are entering the Windows Store.

The company noted that in December, 60% of paying customers were new to its app store, and that in the same month Windows 10 devices spent 4.5 times more in the Windows Store than Windows 8 devices. The increase in app store usage and revenue is what's really notable in the Microsoft's blog post, because it signals that, eventually, Microsoft may start building some momentum for its Windows 10 phones.

Window's mobile problem is no secret
There's nothing surprising about Microsoft's phone problems. The company has lagged so far behind Android and Apple's (AAPL 0.94%) iOS that it barely registers on the market share chart (hint: Windows is one of lines at the very bottom). 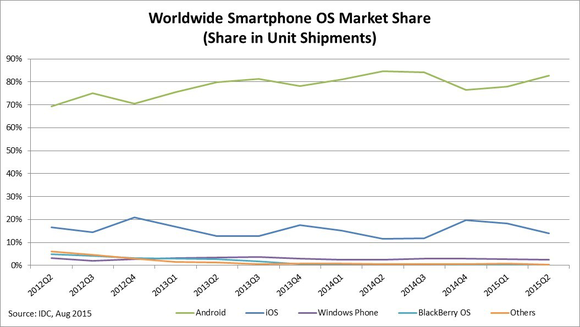 Any small gains Windows phones have made over the past few years have been lost recently (which led me to name the devices Microsoft's worst product in 2015) mainly due to the embarrassing lack of apps available for the platform. But Microsoft is, if only a little bit, showing that Windows phones may have a future with its latest Windows Store usage statistics.

The company noted that it has universal apps like Twitter, Pandora, and Netflix that are available across PCs, tablets, and phones. And the idea of universal Windows 10 apps is what Microsoft is betting the future of its smartphones on. If developers make apps for the growing Windows 10 platform, then those apps will also be available on Windows phones, which it hopes will spur on Windows 10 Mobile adoption rates. As Microsoft said in its blog post, "These developers see the opportunity hundreds of millions of customers present -- and we're just getting started."

Indeed, Microsoft is just getting started. I think Windows 10 has the ability to assuage Microsoft's phone problems and, possibly, allow it to compete against Android and iOS. Once Windows 10 becomes more pervasive and developers see that their apps built for PCs and tablets work well on Windows phones as well, it could help spur on more universal app creation, which in turn could boost interest in Windows phones.

But Microsoft is still far from this point. The company has less than 3% market share in the smartphone space, and Windows 10 isn't going to turn that around quickly. Users have all but pledged allegiance to either Android or iOS, and it's still going to take more than a little success for Windows 10 to pull the company's phone division out of the mire. For Microsoft investors, the latest Windows 10 adoption rates and app store usage should be a promising sight, but the road to Windows phone growth is going to be a long ride, and its success is still anything but assured.

Chris Neiger has no position in any stocks mentioned. The Motley Fool owns shares of and recommends AAPL, NFLX, P, and TWTR. Try any of our Foolish newsletter services free for 30 days. We Fools may not all hold the same opinions, but we all believe that considering a diverse range of insights makes us better investors. The Motley Fool has a disclosure policy.