Please ensure Javascript is enabled for purposes of website accessibility
Log In Help Join The Motley Fool
Free Article Join Over 1 Million Premium Members And Get More In-Depth Stock Guidance and Research
By Matthew DiLallo - Jan 10, 2016 at 11:03AM

Don’t say they didn’t warn you.

Each year companies release an annual report -- a document that a lot of investors don't ever bother to read. If they do, they'll skim through the glossy front section where companies highlight everything that went right. Most never get past that to the risk factors section where investors are warned of what could go wrong.

That's a shame because in a lot of ways, 2015 was the year that the risk factors section came to life for oil companies. Here's a look back at three of the warnings that became a reality last year.

1. "Oil and natural gas prices are very volatile. An extended period of low oil and natural gas prices may adversely affect our business, financial condition, results of operations or cash flows."
The above quote is taken from Whiting Petroleum's (WLL) 2014 annual report. It's the gold-standard risk factor found in the annual report of almost every single energy-related company. That said, it's a risk that really defined last year, with specific warnings becoming the reality.

For example, Whiting Petroleum would go on to highlight that one of the factors that could impact the price of oil and gas was "the actions of the Organization of Petroleum Exporting Countries (OPEC)." Unlike it had done in the past when supplies outpaced demand, OPEC chose not to intervene in the oil market last year. In fact, instead of reducing its oil output, OPEC chose to increase its supply of oil to the market. The decision in early December, which was well telegraphed in advance, still caused crude oil prices to dive toward the end of the year, which resulted in Whiting Petroleum's stock price being mauled: 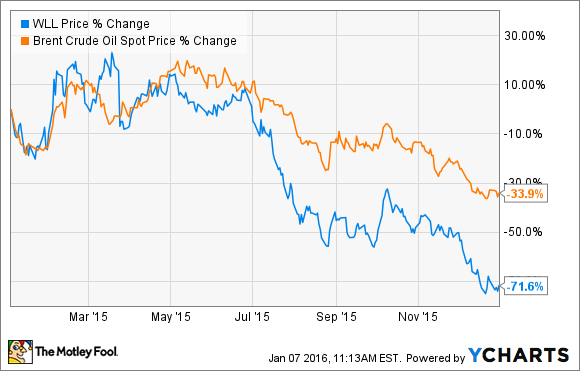 2. "Our level of indebtedness may limit our financial flexibility."
Chesapeake Energy (CHKA.Q) warned investors in its annual report that its then-current debt level of $11.5 billion could cause problems down the road. Among the ways that Chesapeake Energy warned that its debt could impact its operations, was that it could be at a "competitive disadvantage" to its peers that have less debt. That's because Chesapeake Energy might have to put more of its focus on its balance sheet than its operations.

This risk has become the main storyline for the company in the second half of 2015 after weak oil and gas prices caused it to burn through a lot of cash to fund its capex program in 2015. The net result was a significant jump in net debt, which put even more pressure on its balance sheet: 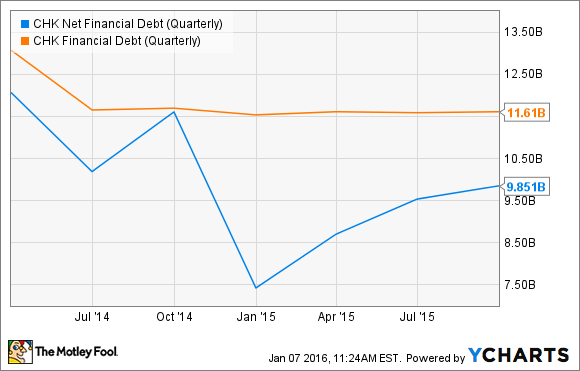 With the company burning through cash, it caused the market to begin to price in the possibility of a default, with some analysts openly beginning to question whether or not a default was imminent. Meanwhile, its rating agency further cut its credit rating into junk territory. These issues forced Chesapeake to hire an investment bank to help it restructure its debt. Because it had to focus on its debt, Chesapeake Energy hasn't been able to take full advantage of the downturn to improve its operations, but instead has been focused on trying to stay alive.

3. "Our investments in joint ventures decrease our ability to manage risk."
Like a lot of its peers, ConocoPhillips (COP 2.01%) uses joint ventures to limit its risk. However, they bring with them their own set of risks. One such risk is being forced to invest in a project that no longer fits within a company's future plans.

For example, ConocoPhillips decided in July of last year that it no longer wanted to be involved in deepwater exploration. As a result, it terminated a contract for a deepwater drillship that was to drill its operated deepwater drilling inventory. However, the company didn't have the same flexibility to halt further investments on non-operated projects such as the Vernaccia exploration prospect, where it is only a 33% working interest holder, or other appraisal prospects like Gila, Gibson, Tiber, or Shenandoah, where its working interests are 30% or less. This lack of control limited the company's ability to manage its financial risk by forcing the company to continue to make investments it would otherwise would not have made during the current environment.

Investor takeaway
If there is one lesson that energy investors learned in 2015, it is that risk is real. When companies outline risk factors in their annual reports, they are doing so to warn investors of the potential for a very bad outcome if things don't go according to plan.