Please ensure Javascript is enabled for purposes of website accessibility
Log In Help Join The Motley Fool
Free Article Join Over 1 Million Premium Members And Get More In-Depth Stock Guidance and Research
By Justin Loiseau - Jan 10, 2016 at 7:04AM

Most growth stocks don't come with high dividend yields, so the ones that do can have a lot of appeal. Or they can offer serious pitfalls -- like these two.

Defining growth dividend stocks
Before revealing the worst offenders, let's define our stock sample. To exclude penny stocks and overly volatile stocks that you would never want to invest in, we'll first drop all stocks that are priced below $5 a share or have market capitalizations of less than $300 million. Next, we'll roughly define dividend stocks as those with yields 3% or higher, and growth stocks as those that have price-to-earnings ratios greater than 50. That whittles things down to just 72 growth dividend stocks. In that family, here are two of the worst of them. 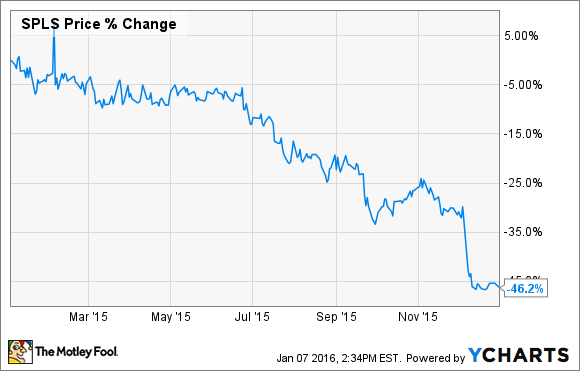 With around 2,000 superstores, Staples (SPLS) is one of the biggest office product retailers around. But this big-box chain has hit hard times in recent years. With sales down 7% and EBITDA plummeting 62% for the five-year period just behind it, the company announced last February that it planned to acquire its biggest competitor, Office Depot, at a price of just over $6 billion. Shares soared, and investors waited for the deal to be sealed.

Unfortunately for Staples and its investors, that announcement was the only good thing to happen to its stock this year. Throughout the rest of 2015, shares steadily declined as investors became increasingly skeptical that regulators would approve the deal. In December, the Federal Trade Commission made good on investors' fears, announcing that it would block the deal. As the companies are the two biggest office supply stores for commercial customers, the Commission worried that removing Office Depot from competitive bidding wars would give Staples too much bargaining power. Shares sank further on the news, leaving Staples investors with a 46% share price loss for the year -- certainly enough to make the top list for worst growth dividend stocks of 2015. 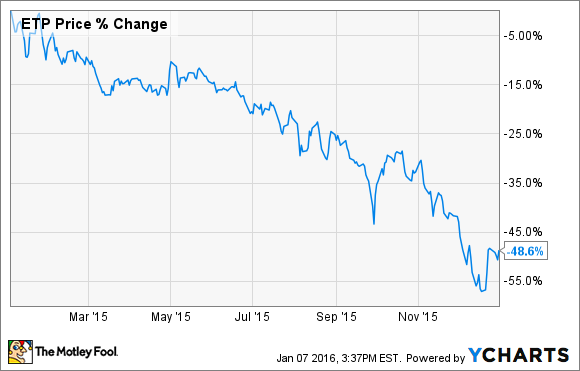 In many ways, there was nothing the corporation could've done differently. The whole energy sector slumped on plummeting prices, and dividend stock investors grew increasingly spooked as competitors like Kinder Morgan slashed their distributions dramatically to keep cash on hand.

However, there are some fundamental problems with Energy Transfer Partner's fundamentals. Its interstate transportation and storage business suffered from lower demand and maintenance issues throughout the year, while non-fee-based contract crunches and commodity prices put the squeeze on overall margins.

Despite the stock price decline, Energy Transfer Partners has kept its dividend alive and, according to fellow Fool Tyler Crowe, it should be able to pull in more cash to continue its distributions in 2016. The company is set to finalize several acquisitions, dropdowns, and sell-offs it started in 2015. If it can manage these moves without any hitches, the company could become the streamlined and reasonably priced growth dividend stock it absolutely wasn't in 2015.

Investor takeaway
Staples currently boasts a dividend yield of 5%, while Energy Transfer Partners offers an astounding 12.5%. That's because, alongside plummeting stock prices, neither corporation cut its dividend in 2015 -- and in fact, both have raised their distributions by around 20% since 2012. Looking ahead, investors need to understand whether 2016 can support that level of stamina. Last year was a period of uncertainty for both Staples and Energy Transfer Partners, and only by offering investors steady and reasonably priced value can these companies expect to start their turnaround tales.

Justin Loiseau has no position in any stocks mentioned. The Motley Fool owns shares of and recommends Kinder Morgan. Try any of our Foolish newsletter services free for 30 days. We Fools may not all hold the same opinions, but we all believe that considering a diverse range of insights makes us better investors. The Motley Fool has a disclosure policy.

1 Stock I Was Glad to Sell Recently