Like many drillers in the oil and gas industry, Seadrill (NYSE:SDRL) has struggled in the current depressed commodity environment. In the face of all this, Seadrill is negotiating and deferring delivery of new rigs has been the focus as the company tries to cut costs and increase liquidity. Last quarter, for example, as Seadrill negotiated a deal with Pemex to extend their partnership by two years, it cut the current contract by $45 million and added $221 million to the backlog. The company is negotiating with Petrobras (NYSE:PBR) right now to accomplish the same end.

Seadrill has started to defer delivery for new rigs as well. It has 15 units under construction -- eight jack-ups, four drillships, and three semisubmersibles. Only six rigs will be delivered in 2016, and two in 2017.

The company has grown incredibly over the past 10 years with revenue increasing from $1.15 billion in 2006 to $4.63 billion. In addition, they were able to grow through the energy down-cycle in 2008-2009. But does the struggling offshore driller present an opportunity? Yes, and here's why: 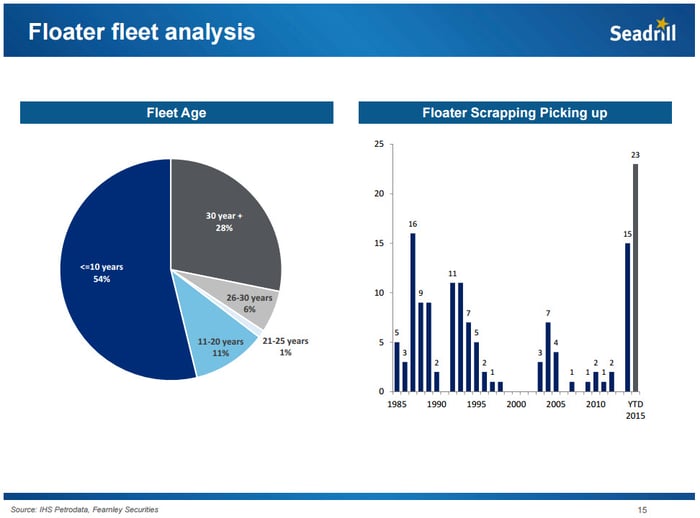 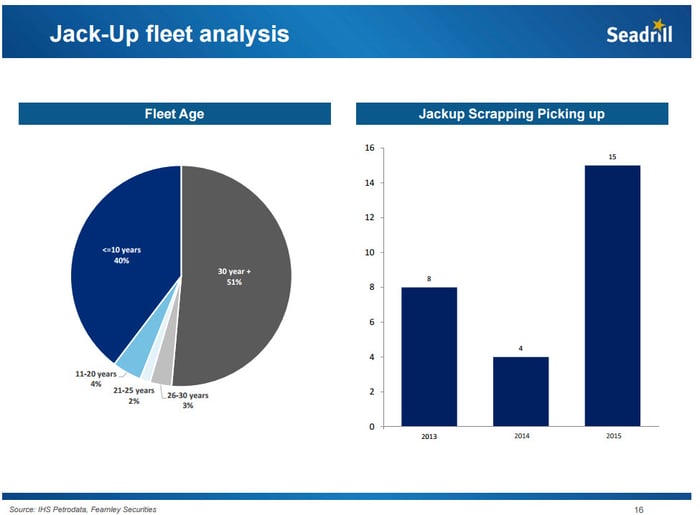 In addition, Seadrill has an ownership interest in multiple companies: SapurKencana (8%), Sevan Drilling (50%), and Archer (40%).

Because they have one of the newest and best fleets in the industry they should benefit immensely versus the competition when drilling ramps up again. 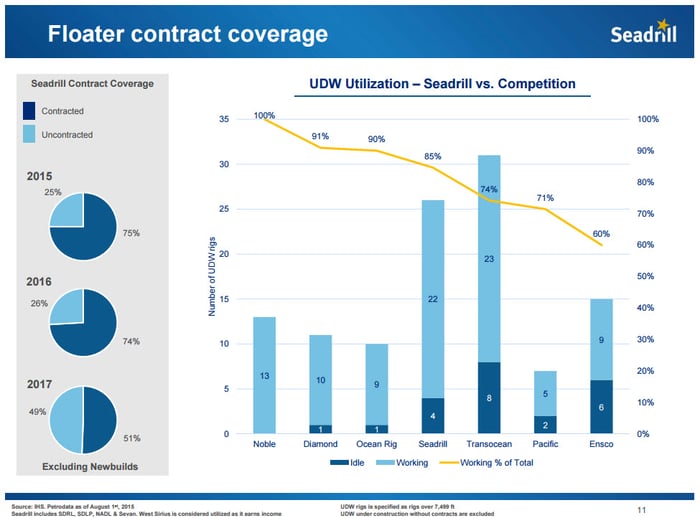 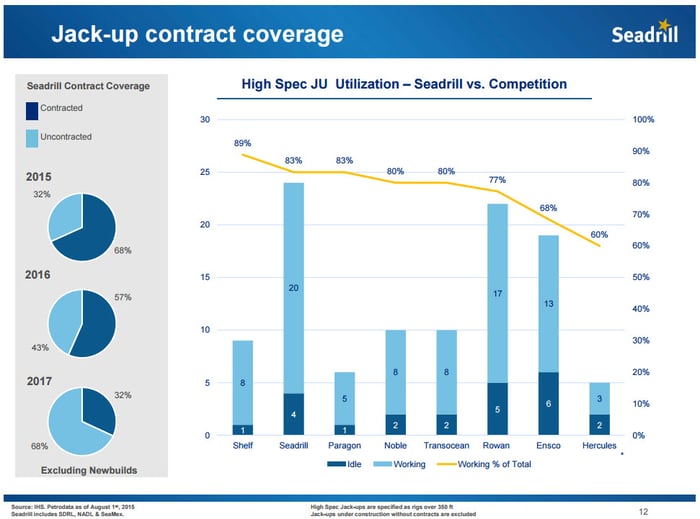 The company has 93% economic utilization and is still cash flow-positive. However, there was a small accounting snafu from the West Polaris rig to Seadrill Partners that affected operating income. Seadrill doesn't recognize contingent forms of consideration before they're realized. 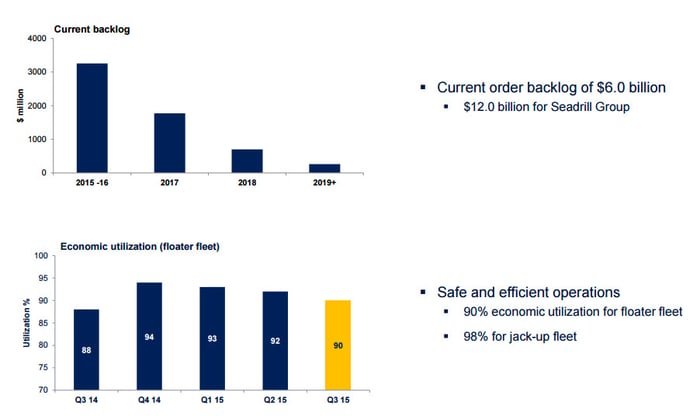 The strong backlog and contract coverage should allow them to weather the storm in the short-to-medium term. This will help pave the way for long-term gains when drilling picks up again.

Debt burden is manageable
It's difficult to ignore the possibility of an extended depression in oil and gas commodities, with the glut of supply in the world. This situation could have a disastrous effect on the entire oil and gas industry. Even so, Seadrill has raised $2.2 billion in 2015 and has decreased net debt from $11.2 billion to $10.3 billion in the last quarter alone. Operating in a commodity business, Seadrill is susceptible to down cycles in the oil market. Down cycles force rig operators to lower prices and pressure rig utilization, and this down cycle could be a little longer than most, considering the glut of supply. The downturn could certainly take longer than expected. However, Seadrill is making the right moves to ride out the current energy environment.

The 15 rigs under construction are another concern for investors right now, as they mean another $4.3 billion cash outlay. The company has already paid about $1.2 billion in pre-delivery installments. Granted, the 15 rigs are not ideal right now, but they've been successful in the past with managing the cash outflows and negotiating for these new rigs. Obviously, the remainder of the deliveries comes at an inopportune time, considering Seadrill's weakened balance sheet. Debt-to-Equity stands at 1.23, while Debt-to-Asset ratio is 0.41. Regardless, the company has been successful in deferring some deliveries, and I would expect this trend to continue in the future.

Management is shareholder friendly and has incentives to be so
Chairman John Fredriksen still owns around 25% of the company. He's built his fortune in the shipping and offshore drilling industry and is well known in the industry for being a best-in-class operator.

Management overall is known as one of the best in the industry. It's currently focused on cutting costs to preserve liquidity. To that end, the company saved $500 million in 2015, which is more than twice the amount previously anticipated. 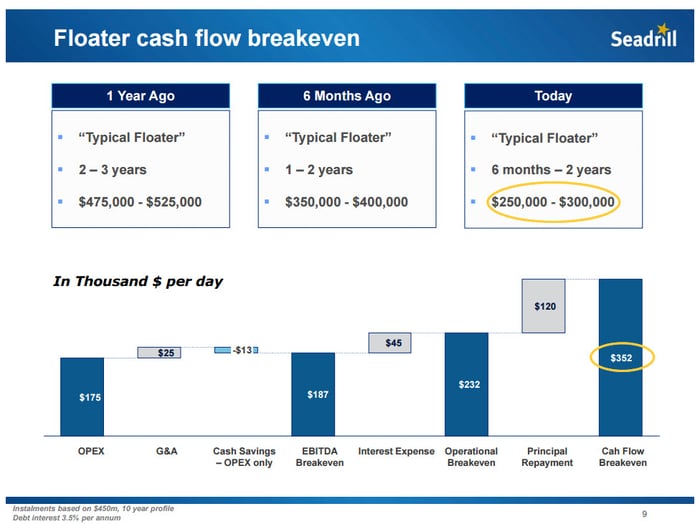 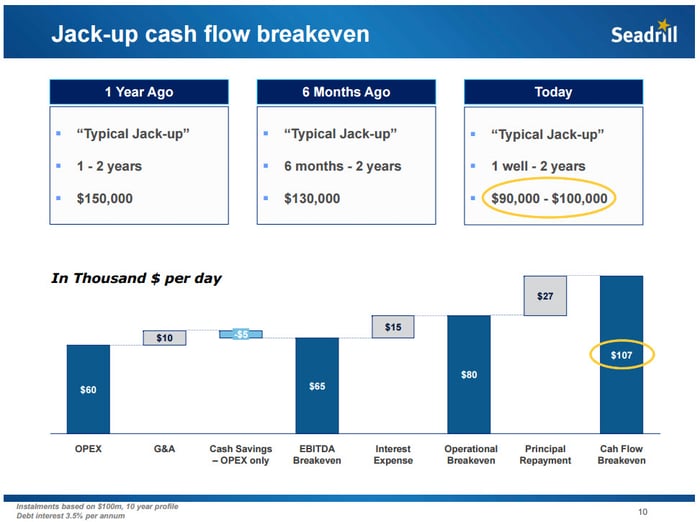 The company has proven itself to be incredibly shareholder friendly in the past, returning capital of about $6.2 billion to shareholders mainly in the form of dividends. The company is pulling back on share buybacks and dividends as it pays down debt. I believe this is the right move, as I expect buybacks and dividends to add to the catalysts when operations stabilize and turn for the better. The suspension of the dividend should help with liquidity and further pay down debt in the coming quarters. The company is willing to endure short-term pain for long-term success.

Bottom line
Seadrill continues to manage the challenges of the down cycle in commodities, an environment likely to persist into 2016. Although shares trade well below tangible book value (a estimate of liquidation value), I can't help being concerned with the potential for an extended period of low oil prices. With that said, the market is already be pricing in an already dire scenario. This gives the company (and it's stock price) room for upside surprises. Also, I hold a somewhat optimistic and contrarian view of oil over the next one to three years.

I find the value in this best-of-breed offshore driller attractive at 15% of tangible book value, a very rough measure of its liquidation value should the worst come to pass. This company is a leader in the ultra-deepwater drilling industry, with a modern and versatile fleet, and it's run by one of the top operators in the industry with considerable insider ownership. The risk-reward scenario looks intriguing at current levels, provided one can stomach gut-wrenching volatility until the industry rebounds.