Microsoft, Qualcomm, and Amazon are all rushing to claim their shares of this booming market.

The Internet of Things (IoT), which tethers everyday objects to each other and the cloud, has become one of the tech industry's hottest buzzwords. Research firm IDC believes that the global IoT market will grow from $656 billion in 2014 to $1.7 trillion by 2020, fueled by the rise of connected homes, cars, and wearable devices. 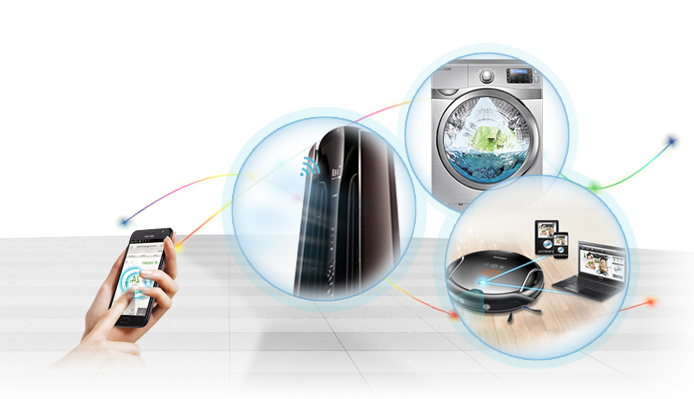 Therefore, it wasn't surprising when companies unveiled a plethora of IoT devices at CES 2016 in January. Some devices -- like Bluetooth-enabled pregnancy tests, smart belts for monitoring movement and waist size, and color-changing Wi-Fi light bulbs -- felt superfluous and silly. But amid all those announcements, there were several key partnerships, announcements, and trends which are worth noting.

Microsoft teams up with Samsung
First, Microsoft (MSFT 3.18%) demonstrated how Windows 10 could be integrated with Samsung's IoT-connected smart appliances. During the CES demo, Microsoft's Bryan Roper asked Cortana natural language questions about Samsung's refrigerators, televisions, and washing machines. Cortana could tell Roper how much time was left before a load of laundry was finished and how often family members used certain appliances.

Last August, Microsoft offered Windows 10 IoT Core for free to OEMs. The more IoT devices run on Windows 10, the more easily they can be tethered to Microsoft's "One Windows" ecosystem across smartphones, tablets, PCs, and Xbox One consoles. That could make its "universal apps" more appealing to mobile developers who would otherwise shun Windows Phone's tiny user base, while delivering more data to its Azure IoT services.

Qualcomm expands beyond mobile devices
Meanwhile, Qualcomm (QCOM 0.32%), the biggest mobile chipmaker in the world, unveiled plenty of new chips to expand its reach beyond the saturated smartphone and tablet markets.

At CES, Qualcomm unveiled its Snapdragon 820A chips for connected cars, which will enable in-car infotainment systems to be upgraded with both hardware and software updates. Its Snapdragon 602A chips have already been designed into several 2017 Audi vehicles. To connect additional devices, Qualcomm announced the Snapdragon X5, a cheap 4G modem for IoT devices.

Qualcomm also revealed a smart home reference platform powered by its Snapdragon 212 processor, a Bluetooth Smart SoC designed for low-power devices, and an expansion of its partnership with pharma giant Novartis to produce connected inhalers. Prior to CES, Qualcomm launched a promo video for its Snapdragon Flight reference design for drones, which could dramatically lower production costs across the market.

All these moves can help Qualcomm diversify its core chipmaking division away from smartphone and tablet chips, which are ceding market share to low-end rivals like MediaTek and high-end ones like Samsung. Last quarter, sales at the unit fell 25% annually as operating profit plunged 73%.

Amazon steals the show without attending
Amazon (AMZN 6.22%) didn't officially attend CES, but many companies demonstrated their ties to its ecosystem. Various home security, lighting systems, and ceiling fan makers all integrated Amazon's Alexa voice-recognition platform into their new products. Ford also announced that it will integrate its SYNC platform with Alexa, enabling drivers to turn off house lights from the car or remotely start a car from indoors. Since Alexa also powers Amazon's Echo smart speaker and new Fire TV, both devices will likely evolve into smart home hubs in the near future.

The growth of Amazon's Prime ecosystem beyond e-commerce and into smart homes, vehicles, and entertainment could disrupt the growth of Google's ecosystem. Amazon already prevented Google from gaining ground in e-commerce, and an aggressive expansion into IoT devices could confine Google to traditional mobile devices in certain markets.

Focus on ecosystems, not devices
Much of the hype about the IoT market centers on connecting everyday devices to the cloud. But to gain a better long-term understanding of the market, investors should concentrate on the growth of the major ecosystems instead.

Microsoft wants to tether IoT devices to its "One Windows" ecosystem, Qualcomm wants to design chips for cars, appliances, and drones, and Amazon wants to connect everything to its e-commerce backbone. If these companies play their cards right, they could benefit from the explosive growth in connected devices over the next few years.