The ITC extension means SolarCity doesn't have to transition its business model away from leases and PPAs.

There's no question that the recent investment tax credit extension is a good thing for the solar industry. The industry's growth over the past decade will now continue uninterrupted and the subsidy stepdown starting in 2020 gives a more predictable path forward rather than the previous plan of falling off a cliff in 2017.

One of the strange side effects of the extension is that it delays some fundamental changes that are arguably needed in the solar industry. Whether you're a bull or a bear looking at the residential solar industry, in particular, the subsidy extension will likely only entrench your stance on the industry.

Why subsidies distort solar
The way SolarCity (SCTY.DL), Sunrun (RUN 2.71%), and Vivint Solar (VSLR) sell most of their solar systems is with a power purchase agreement (PPA) or lease. A customer signs a long-term agreement to buy energy from the developer and then the company owns the system on your roof.

Funding all of these installations isn't simple like financing a home either. There are value components coming from tax benefits as well as long-term cash flows. So, residential solar companies divvy up the benefits in their financing.

The biggest financing component comes from tax equity investors. They don't really care about the cash flows coming from the customer, they want the tax benefits from the ITC and accelerated depreciation that solar systems provide. In the case of SolarCity, you can see below that tax equity funded $307 million of $543 million in installation costs during the third quarter of 2015. So, 57% of the company's funding comes from investors who care most about the tax benefits solar provides. The rest of the financing comes from financing like asset backed securities. 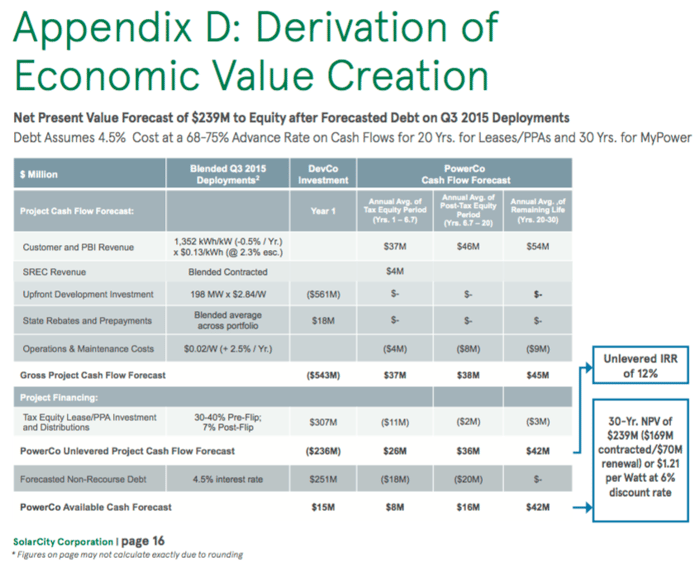 This creates a distortion in the market because competition isn't just about who can build a solar system for the lowest cost, it's about who can get the best financing deals and who can better perform financial engineering around its cash flows.

If the ITC had dropped from 30% to 10% the percentage of value coming from tax equity partners would have been smaller, meaning it would be less important in the financial structure for both companies and customers. In all likelihood, that would have meant more customers buying solar systems through loans or cash, changing the competitive dynamic.

SolarCity's growing opportunity/threat
When SolarCity launched the MyPower loan product and Vivint Solar partnered with Mosaic for solar loans it was a nod to a potential future where leases and PPAs weren't going to be as important. But with the ITC extension and extended accelerated depreciation the move to loans and cash sales will be delayed simply because companies don't have to make the transition.

That means residential solar companies will be an even bigger version of what they are today. If you love the third party ownership residential solar model that's great, but short sellers have hit residential solar stocks hard in the past year as they question the assumptions behind the current business model.

Good sign or bad?
In the past year, SolarCity has added $2.2 billion in gross retained value under leases and PPAs. Installations are expected to grow 40% in 2016 and likely more thereafter. Simply put: a lot of projected value will be added to SolarCity in the next few years. If you think retained value is a good measure of value and customers will live up to expectations the stock could be set up to surge higher.

On the other hand, if you think SolarCity and other residential solar lease/PPA companies are projecting more value than they'll be able to deliver then the fall from grace will be even bigger. That's what the bears are betting on.

We simply don't know how customers will behave once SolarCity or competitors' solar systems reach 10 or 20 years of age. And until we do the debate about the value created by residential solar companies will rage on. Except the ITC extension means that by 2020 they'll be many times bigger than they are today. That's either great news or terrible news for SolarCity and its competitors. It just depends on how you look at it.