The U.S. auto market may be peaking, but GM expects profit growth anyway. Here's why -- and here's why there are good reasons for investors to believe it.

GM CEO Mary Barra announced a boost in 2016 guidance and in GM's share-buyback efforts at a conference in Detroit on Wednesday. Image source: General Motors.

2015 will be great, and 2016 will be even better, GM said
The announcements were made at a conference for investment analysts in Detroit. At the conference, GM's chief financial officer, Chuck Stevens, said that the company expects improved pre-tax earnings, better pre-tax profit margins, and increased free cash flow in 2016 versus full-year 2015 results. 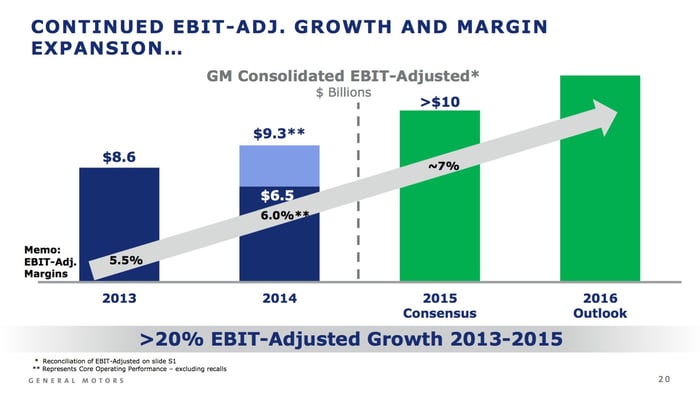 This slide from Stevens' presentation shows the growth in GM's pre-tax earnings during the last three years, and the expected trend for 2016. Source: General Motors.

It may be a surprising move given that the industry-wide expectation is that growth in auto sales is likely to be slim in 2016. GM president Dan Ammann acknowledged as much in his remarks at the conference. As he put it, the "macro tailwind," the big push that GM and rivals have received as global new-vehicles markets have recovered from the 2008-2009 economic criss, is now "diminishing."

Ammann also acknowledged that a long list of high-tech actors are seeking to "disrupt" the auto industry, and especially the large established players like GM. But, he emphasized, GM has responded to both of these pressures with an "intense focus" on "resource allocation."

GM's push to improve its own investment returns
It means a lot more than, "GM is selling a lot of trucks and SUVs right now." While that's true, there's a bigger story playing out, though it hasn't been quite as visible.

Under CEO Mary Barra, GM's management team has put an extremely strong emphasis on seeking returns on invested capital (ROIC). Simply put, GM has shifted away from its longtime emphasis on maximizing sales volume to a new focus on maximizing the returns on the money it invests in new products, new facilities, new technologies, and new markets.

Barra has a comprehensive plan to dramatically improve GM's bottom line and margins by early next decade. But the plan is already showing results. Ammann showed a slide that sums it up: While GM's revenue in 2015 will be roughly flat compared to its 2013 result, its ROIC and pre-tax profit margin will be significantly better.

That improvement is happening because of resource allocation. GM has chosen to leave markets -- ending the Chevrolet brand's efforts in Europe, for instance -- in which it wasn't making enough money, and boosted investments in businesses -- Cadillac, for instance -- which have the potential to generate better returns over time. 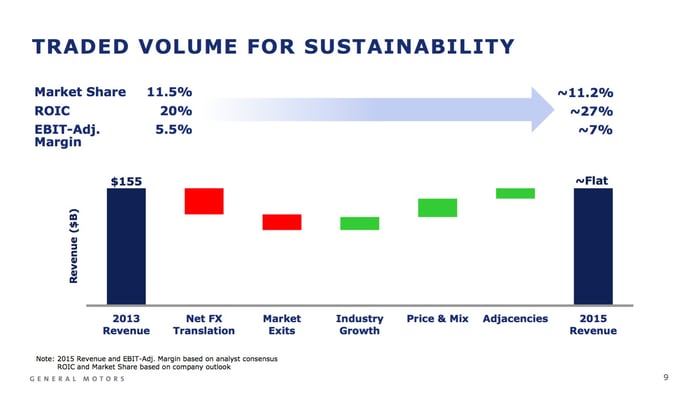 Long story short: GM's moves should continue to boost earnings and margins, even as the rate of growth in global new-vehicle sales stalls.

Are big investors finally catching on to the GM story?
GM's announcement followed a similar move by rival Ford (F -2.16%). The Blue Oval increased its own profit guidance for 2016 late on Tuesday, and announced a special one-time dividend payment.

Ford's move was initially met with skepticism by some Wall Street analysts at the conference, who questioned whether CEO Mark Fields and his team are taking the threat of disruption as seriously as they should. In contrast with GM's gains, the Blue Oval's stock was down sharply in midday trading on Wednesday. But perhaps because of GM's announcements during the last couple of weeks -- including its alliance with ride-sharing start-up Lyft, and its cutting-edge new Chevrolet Bolt electric car -- no such skepticism was aimed at the company.

GM and other traditional automakers have been tagged by many investors as "no-growth" dinosaurs. That's a big part of why GM's stock has languished while the company has been making huge strides.

Now, however, the results of those efforts are starting to be visible, and it's possible that big investors are taking another look at the old General. If so, that's great news for those who already hold GM stock. Sit tight.