The growth in commercial air travel is a tailwind for The Boeing Company in 2016.

A lot of large companies are struggling with low commodity prices, a strong dollar, and weak demand in today's economy, but that's not the case with airlines. Boeing Company (BA -0.63%) is experiencing a surge in demand as travel by air increases around the world. Better yet, low commodity prices and low fuel prices help the company's profitability long term.

The question is, does that set the company up for its best year yet?

Set up to succeed
In a business like manufacturing, aircraft success is built over years, or even decades. The launch of the 787 and 737 MAX lines came at a time when growth in air travel in the Middle East and Asia was surging; the result was a surge in demand for Boeing's aircraft.

At the end of the third quarter, backlog stood at $426 billion, and the company was just starting to churn out new aircraft at a high rate. A record 37 787s were delivered in the quarter, and the first 737 MAX was completed. As both products ramp up, the revenue and earnings growth we've seen in the past five years should continue. 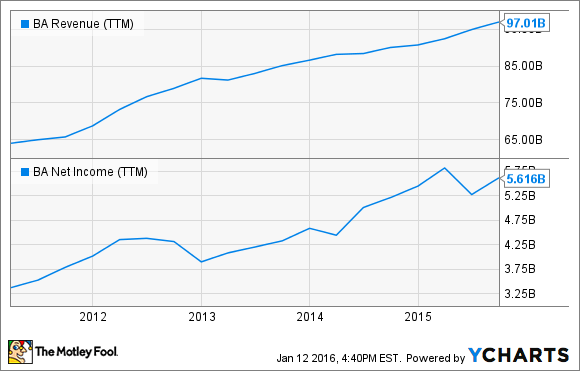 Despite ups and downs in the economy, it's hard to see commercial air travel taking a big hit in the foreseeable future. Consumers in emerging economies are getting richer, leading to more travel, and in developed companies, there's more disposable income for travel. Both point to growing demand long term.

Commercial aircraft demand appears to be in the midst of a strong cycle, but military revenue isn't looking quite as positive. Budget cuts have left less opportunity for Boeing to build aircraft, and there's no uptick in demand on the immediate horizon. But space and security is starting to fill some of that void, resulting in the Defense, Space & Security segment backlog declining only $1 billion to $59 billion last quarter.

Even in its weakest segment, Boeing isn't looking at much of a decline in demand.

What Boeing does with all that cash
The improving performance in Boeing's business has left plenty of cash for management to use as it sees fit. And management has increasingly decided to spend money on share buybacks and dividends. You can see below that the dividend has more than doubled in the past five years, while the share count is down over 10% from its peak. 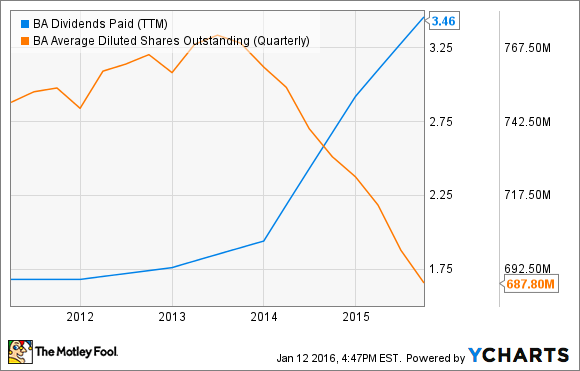 Some might see this as a sign that Boeing doesn't have growth opportunities it can invest in, but I think this is Boeing's size finally reaching a tipping point. The fact that management is paying back shareholders instead of chasing risky growth projects is a good sign for shareholders.

The best year yet
Boeing is well positioned going into 2016, and the strong backlog in its commercial aircraft business sets the company up for its best year yet. For investors, a forward P/E ratio of 14 and a dividend yield of 3.4% is a good value right now. A falling share count and an increasing dividend are just icing on the cake.