Please ensure Javascript is enabled for purposes of website accessibility
Log In Help Join The Motley Fool
Free Article Join Over 1 Million Premium Members And Get More In-Depth Stock Guidance and Research
By Leo Sun - Jan 14, 2016 at 10:08AM

Could this tobacco giant’s huge rally stall out in 2016?

Shares of Reynolds American (RAI) have rallied 40% over the past 12 months, easily outperforming the S&P 500 and its 6% decline. In a previous article, I discussed why Reynolds and its rival Altria (MO 0.00%) are solid investments for these volatile times -- they're insulated from currency fluctuations, benefit from lower gas prices, and have plenty of room to raise prices to offset lower smoking rates. However, Reynolds also has a few notable weaknesses which could cause its rally to stall out in the near future.

1. Declining dividends, rising debt
Income investors are often drawn to tobacco stocks for their hefty dividends. But if we compare Reynolds' dividend yield to Altria's over the past five years, it becomes clear that the company might lose the favor of serious income investors. 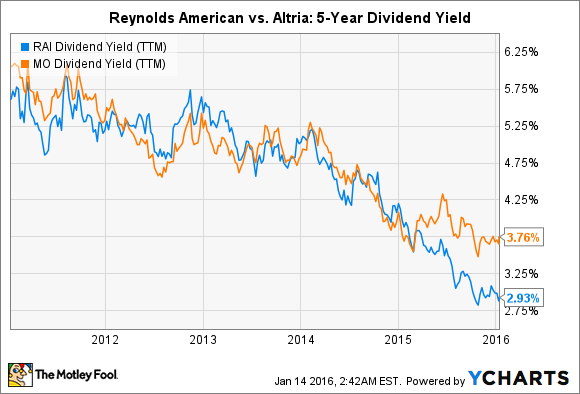 Over the past 12 months, Reynolds paid out $1.4 billion in dividends but generated free cash flow of negative $99 million. That shortfall in cash flow was caused by the recent $29 billion acquisition of rival Lorillard, which more than tripled Reynolds' debt balance to nearly $17 billion. To reduce that debt, Reynolds sold the non-U.S. rights to its Natural American Spirit cigarette brand to Japan Tobacco for around $5 billion last year. Meanwhile, Altria's long-term debt declined 6% annually to $12.9 billion last quarter.

Negative free cash flow and high debt levels are unlikely to prevent Reynolds from paying its dividend, but they could reduce payout increases. During the market downturn between 2007 and 2009, Reynolds didn't raise its dividend. If a comparable market crash occurs before Reynolds pays off its debt and gets its free cash flowing again, its dividend could be in jeopardy.

Newport, for example, gained as part of the Lorillard deal, is the top selling menthol cigarette in America and the second best-selling cigarette brand after Marlboro. The addition of Newport helped Reynolds revenue soar 41% year-over-year to $3.2 billion last quarter. However, menthol cigarettes have been targeted by the FDA and anti-tobacco lobbyists in the past on grounds that they make cigarettes more addictive. While regulators haven't gained much ground against menthol cigarette makers, adverse rulings in the future could hurt Reynolds' growth.

Natural American Spirit cigarettes, which the company claims use "organic tobacco" and "additive-free" blends, are also popular among younger smokers. However, the FDA issued a warning to Reynolds last year, claiming that those labels were misleading.

Reynolds also owns Vuse, the best-selling e-cigarette brand in America. While the overall e-cigarette market remains small, Reynolds hopes that mainstream interest grows to offset weaker shipments of traditional cigarettes. However, the FDA will likely pass new regulations against e-cigarettes later this year, and a flurry of bad news regarding rising teen use, public bans, and exploding vaping devices could reduce its appeal as a smoking cessation product. Losing these niche markets could cause Reynolds to lose its competitive edge against Altria.

3. Higher taxes and packaging restrictions
U.S. smokers still pay a lower price per pack of cigarettes than their British and Australian counterparts, but higher excise taxes and stricter packaging restrictions could both cause domestic shipments to fall. Back in 2009, the federal government raised the excise tax on a pack of cigarettes from $0.39 to $1.01 per pack. President Obama recently proposed raising that amount by another $0.94 in fiscal 2016. Meanwhile, many states have repeatedly hiked taxes on cigarettes, causing cigarettes to ring in at well over $10 per pack in some parts of the U.S.

Since smoking rates are generally higher among lower-income individuals who are more sensitive to price hikes, higher taxes could cause shipments to decline at a faster rate than Reynolds and Altria can adjust their prices. Moreover, if the United States adopts the "plain packaging" strategy used by many other countries, premium brands like Camel and Newport could lose ground to cheaper rivals.

No need to panic yet . . .
Reynolds American has a few blind spots, but I don't believe that these weaknesses will cause the stock to fall in 2016. Barring major regulatory action, its stock will likely remain a dependable holding for riding out these volatile markets.